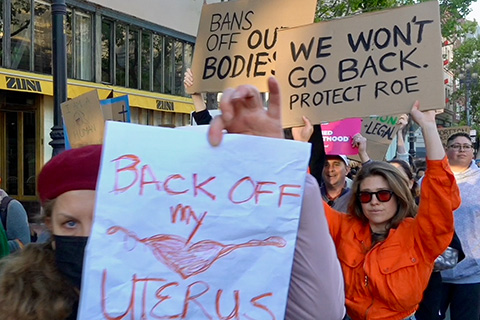 In a rare breach of US Supreme Court secrecy, a draft majority opinion written by justice Samuel Alito was published on May 2. The would-be ruling makes a case for completely overturning Roe v. Wade (1973) and Planned Parenthood v. Casey (1992), allowing states to outlaw all abortions without exceptions for rape and incest. Women in half of the states will lose access to safe and legal reproductive services, with ominous implications for countless other long-established rights.

Protests immediately broke out across the country, including on the steps of the US Supreme Court in Washington D.C., and have continued for weeks. One of the first locally was at the Federal Courthouse in Oakland, within hours of the news breaking. Check the Indybay calendar for upcoming events.

Abortion is not only about women its a human, civil, environmental rights issue says EOPA

From the Mission to the Castro, March for Reproductive Justice (May 14) |

Taking It To the Streets for Reproductive Justice for (May 14) |

From the Mission to the Castro, March for Reproductive Justice (May 14)

Thousands March in SF in Dual Womens Rights Marches (May 14) |

Angry Women and Supporters Take to the Streets (May 7) |

Rapid Response for Abortion Rights (May 3) |

Stop the Supreme Court's War on Women: Abortion is a Right! Take to the Streets! (May 03)

Berkeley Rages as Reproductive Rights Under Attack (May 9) |

Protesters Provide the Punch at Bay Area Book Fest (May 10)

Immediate Response to Supreme Court Leak at Federal Bldg (May 2)

Students Walk Out at Three SF Peninsula High Schools (May 29) |

Look Who's Marching in Mountain View (May 17)

Handmaids and Hangers at Bay Area Bans Off Our Bodies Protests |

Rally for Abortion Rights at SJ City Hall (May 3) |

Monterey Rallies for Reproductive Rights (May 16) |

How We Protect Our Reproductive Freedom w/ PFAW (May 5) |

Nationwide Call to Action: Abortion Rights Now! Bans Off Our Bodies! (May 3) |

Women and Their Allies March For Reproductive Rights - Again (April 9) |

Rising Up for Abortion Rights in Berkeley (April 9) |

March for Abortion Rights in Berkeley: "This was Just the Beginning!" (March 8)