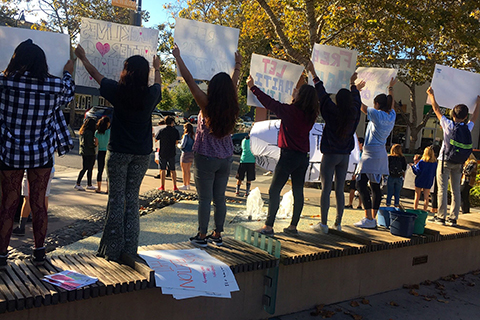 UPDATE: On October 3-4, Hurricane Matthew killed hundreds of people in Haiti, causing untold damage. The elections will not be held as scheduled, after already having been postponed repeatedly throughout this year. A new date has not been announced yet by the electoral council.

September 30 marked the 25th anniversary of the coup that overthrew Haiti’s first democratically-elected president, Jean-Bertrand Aristide. U.S. Central Intelligence Agency agents were present with the Haitian military during the coup. Protesters marked the day with rallies in the Bay Area cities of Palo Alto, Oakland, and San José. The U.S. government financed fraudulent elections in 2015 and new elections will be held on October 9 of this year. At the Bay Area rallies, demonstrators standing in solidarity with the people of Haiti demanded free and fair elections in Haiti without U.S. interference.

On January 12th, a 7.0-magnitude earthquake hit Haiti. The earthquake was centered ten miles southwest of Haiti's capital Port-Au-Prince and was the largest earthquake to strike the Caribbean nation in more than two centuries. Buildings have collapsed and more than 100,000 people are feared dead. Among the buildings that collapsed were the Presidential Palace, the UN headquarters and at least one hospital in the capital.

Friday, February 29th was the 3rd International Day in Solidarity with the Haitian People. On that day, there were "coordinated protests on 4 continents on the 4th anniversary of the ongoing US/UN invasion, coup, and occupation against democracy in Haiti." Haiti Action Committee was at the Marine Recruiting Station in Berkeley (64 Shattuck Square, 1/2 block south of University Ave. in Berkeley), starting at 7:30am, for a day of civil resistance and protest four years after the latest invasion of Haiti, which was led by US Marines.
Read More

Oppose Expanded US/UN Military Intervention in Haiti! Wed Oct 26th 4pm
Support Independent Media
We are 100% volunteer and depend on your participation to sustain our efforts!