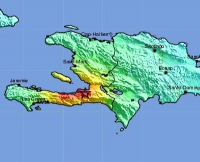 On January 12th, a 7.0-magnitude earthquake hit Haiti. The earthquake was centered ten miles southwest of Haiti's capital Port-Au-Prince and was the largest earthquake to strike the Caribbean nation in more than two centuries. Buildings have collapsed and Prime Minister Jean-Max Bellerive told CNN he believed more than 100,000 people have died. Among the buildings that collapsed were the Presidential Palace, the UN headquarters and at least one hospital in the capital.

The earthquake struck around 5:00pm and was followed by at least 27 aftershocks, the largest two of which were 5.9 and 5.5 in magnitude. René Préval, the president of Haiti, has described how he had been forced to step over dead bodies and heard the cries of those trapped under the rubble of the national parliament. "Parliament has collapsed. The tax office has collapsed. Schools have collapsed. Hospitals have collapsed," he told the Miami Herald. "There are a lot of schools that have a lot of dead people in them."