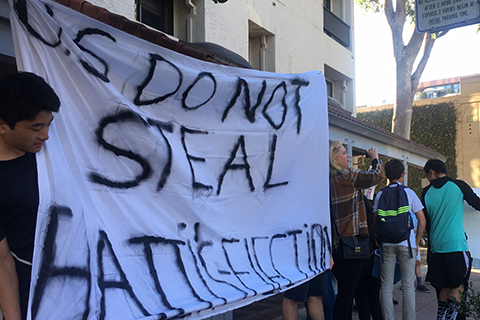 UPDATE: On October 3-4, Hurricane Matthew killed hundreds of people in Haiti, causing untold damage. The elections will not be held as scheduled, after already having been postponed repeatedly throughout this year. A new date has not been announced yet by the electoral council.

September 30 marked the 25th anniversary of the coup that overthrew Haiti’s first democratically-elected president, Jean-Bertrand Aristide. Aristide was the candidate of Haiti’s popular movement Lavalas in the 1990 presidential election; he won with 67% of the vote. In 1991 a military coup d'état deposed President Aristide. U.S. Central Intelligence Agency agents were present with the the Haitian military at army headquarters during the coup. Protesters marked the events of 25 years ago with rallies in the Bay Area cities of Palo Alto, Oakland, and San José.

After the U.S. government financed fraudulent elections in Haiti on October 25, 2015, Haitian people rose up and protested, condemning interference in the country's elections. A special verification commission in Haiti verified the massive fraud; re-elections will be held on October 9 of this year. Dr. Marie Narcisse of the Fanmi Lavalas Party, the party of the majority of Haitian poor, is expected to be the clear winner.

At the rallies in the Bay Area, demonstrators standing in solidarity with the people of Haiti demanded free and fair elections in Haiti without U.S. interference.