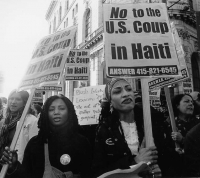 Friday, February 29th was the 3rd International Day in Solidarity with the Haitian People: there were "coordinated protests on 4 continents on the 4th anniversary of the ongoing US/UN invasion, coup, and occupation against democracy in Haiti." Haiti Action Committee was at the Marine Recruiting Station in Berkeley (64 Shattuck Square, 1/2 block south of University Ave. in Berkeley), starting at 7:30am, for a day of civil resistance and protest four years after the latest invasion of Haiti, which was led by the US Marines.

Haiti is still under a foreign military occupation which has been marked by rapes and wanton killings of the poor. Since the coup, Haiti has faced growing hunger, unemployment, and an increased cost of living. Haiti’s jails are still filled with political prisoners and the poor, while coup plotters and paramilitary death squads remain free. Although President Rene Preval was elected in 2006, most functionaries from the US-installed coup regime of 2004-06 remain in office today.

A protest in solidarity with the Haitian people was held in downtown San Jose at the corner of Market Street and San Carlos Street, at the south end of Cesar Chavez Plaza from 5:00pm to 6:00pm. Events were reportedly also planned for Santa Cruz, Sonoma, San Francisco, Oakland, Fremont, San Rafael, and many other locations around the world.