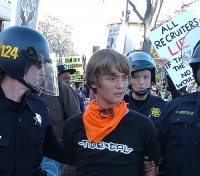 On Tuesday February 12th, after hours of debate, the Berkeley City Council voted 7-to-2 to "clarify" an anti-recruitment resolution it had passed on January 29th. The original resolution stated that the U.S. Marine Recruiting Station near Berkeley High School "is not welcome in the city, and if recruiters choose to stay, they do so as uninvited and unwelcome intruders." The new resolution (

text ) stated that the military recruiters have the legal right to stay and that while the city opposes the war and military recruitment, it supports the troops. Berkeley had faced threats from Republican lawmakers who wanted to cut federal and state funds due to the city's anti-recruitment stand. The Council voted 5-4 not to apologize for the original statement, but it had planned on sending a letter with its original statement to the military recruitment station and it will no longer do so. Members of Code Pink say they now intend to place a resolution on the ballot to oust the recruitment center through a zoning change.

Protesters had camped out overnight Monday to oppose changes to the Council's anti-recruitment stand. Several pro-war groups organized members to confront protesters in Berkeley on Tuesday. The major group organizing pro-war protests was Move America Forward, an anti-immigrant pro-Iraq-war organization that grew out of the Republican group that was behind the recall of Gray Davis.