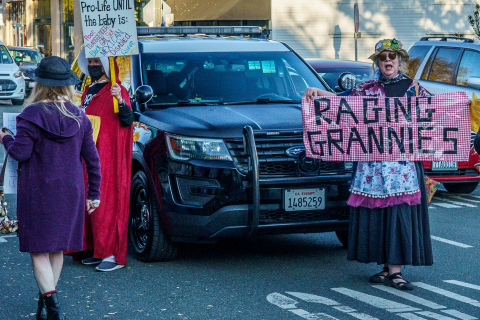 As the United States Supreme Court stood poised on December 1 to uphold a Mississippi law that bans abortions after 15 weeks of pregnancy, demonstrators across the US took to the streets in creative protest. A new organization on the reproductive justice movement scene, Strike for Choice, said the date, which coincided with World AIDS Day, "is fitting because we owe so much to the Act Up movement that moved the needle on the government’s attitude towards powerless AIDS patients."

At a demonstration in San Mateo, where women wore green "don't tread on me" uterus emblazoned t-shirts, Whole Foods management called the police as soon as protestors arrived. Palo Alto Whole Foods summoned police to attend to grandmothers in aprons and handmaiden characters in red cloaks. The grocery store chain has headquarters in Texas, yet has not spoken up to support its customers, who are mostly women. Dallas-based AT&T is one of the top donors to the sponsors of Texas' abortion ban, making it another target for protest. In San Francisco, AT&T management summoned police to deal with peaceful "Lady of Liberty" protesters who sported pink robes and wielded torches created from cardboard.

Also, on December 1, speakers at after-dark rallies in San Jose and San Francisco called for bodily autonomy and the freedom to choose when and if to procreate. Mobilization for Reproductive Justice—SF Chapter organized an afternoon speakout at the original Federal Courthouse in San Francisco. At that event, activists cheered and applauded calls to action for January 22, 2020, a day that will mark the 49th anniversary of landmark decision Roe v. Wade.

Rally for Reproductive Justice at the Federal Courthouse in San Francisco |

Strike for Choice in Palo Alto — We Don't Talk to Police |