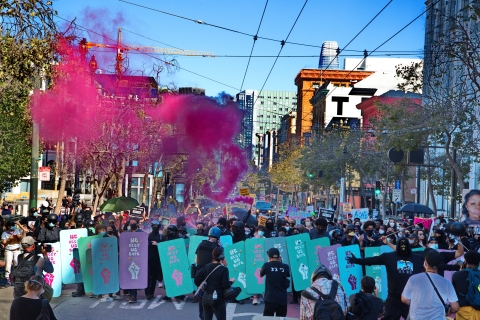 Over a thousand women took to the streets of San Francisco on October 17 in solidarity with actions nationwide responding to the anticipated loss of women's rights with Amy Coney Barrett replacing the late Ruth Bader Ginsburg on the Supreme Court, as well as to protest the crimes of Donald Trump more generally. They marched from city Hall, up Market Street, to the Embarcadero. As part of COVID distancing, there were no rallies at either end of the march.

Maskless Trump supporters in bulletproof vests attempted to rally near City Hall. Police tried to keep furious San Franciscans behind metal barriers. However, the protesters kept police on the run as they redeployed at various locations around City Hall. At one point, the police used pepper spray.

Led by a wall of protesters' shields, there was a spontaneous march south on Market Street.

Women March in SF for Rights and to Protest Trump |

Castro Valley: Women's March for the Seat to Save SCOTUS |

Castro Valley: Women's March for the Seat to Save SCOTUS

At Women's March in Petaluma, GOP Called Out for Assault on Women |