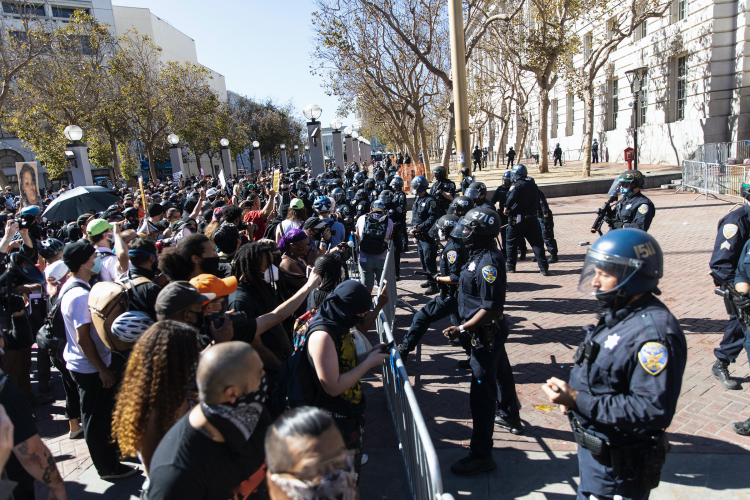 It was clear from the start that the anti-fascist gathering far outnumbered the right-wing group assembled at United Nations Plaza in San Francisco. There were over 400 counter-protesters, versus 5-6 who came to support the white nationalist, misogynist, homophobic group.

“By standing united as queers, leftists, and working people we can stop the right-wing bigots before they grow into a mass movement” said auto mechanic assistant Norma Gallegos.

Kristina Lee, a museum worker, was proud to have played a part in organizing the contingent. “It’s important that so many people came out today. I felt like a lot of press and internet postings were sowing seeds of fear. Everyone here is standing up to that. As a Black, queer woman raised in the City, I know that we always need to come out against fascists. The more of us there are, the less dangerous they are.”

In spite of the blazing sun and 90-degree temperatures, a sense of camaraderie prevailed, with legal observers from the National Lawyers Guild making sure everyone had their emergency number, and volunteers sharing snacks and water.

Holding a sign that read “Capitalism is the problem – socialist feminism is the solution,” Freedom Socialist Party leader Nancy Reiko Kato said of the event, “We outnumbered the right. We out-organized the right. We are stronger than the right.”

One observer called the tiny rally "a complete failure." They said that only five to ten members of the extreme right-wing group showed up, and estimated they were met by at least 500 protestors who forced them to retreat from the stage, some throwing eggs and water bottles. The tiny group's extensive preparation included a rented stage with a lift and a sound system, but they had no audience other than the huge counter-protester contingent that drowned out their speakers with bull horn sirens.

An estimated one to two hundred riot police tried to keep the two groups apart with barricades and weapons, but the counter-protesters succeeded in forcing the right-wing bigots to flee. Police gave them a ride in a speeding SFPD van to the parking garage where the hate-mongers had parked. Once they were dropped off, the frightened fascists wasted no time, and sprinted to their cars.
https://www.radicalwomen.org
§Smash Fascism
by Bigots Forced to Flee
Sunday Oct 18th, 2020 2:29 AM 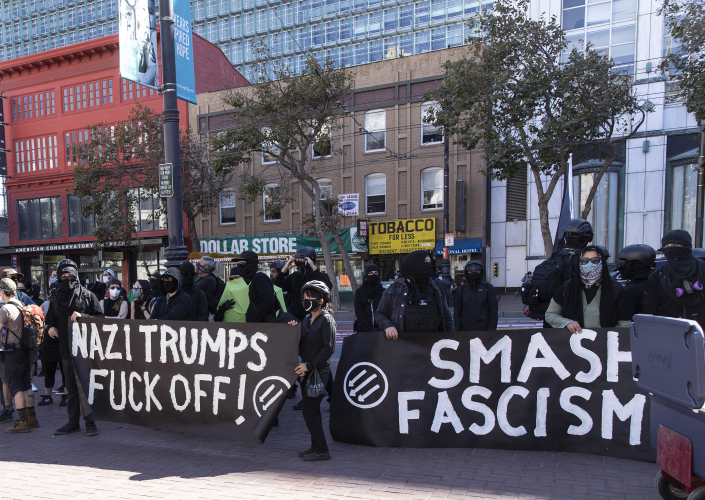 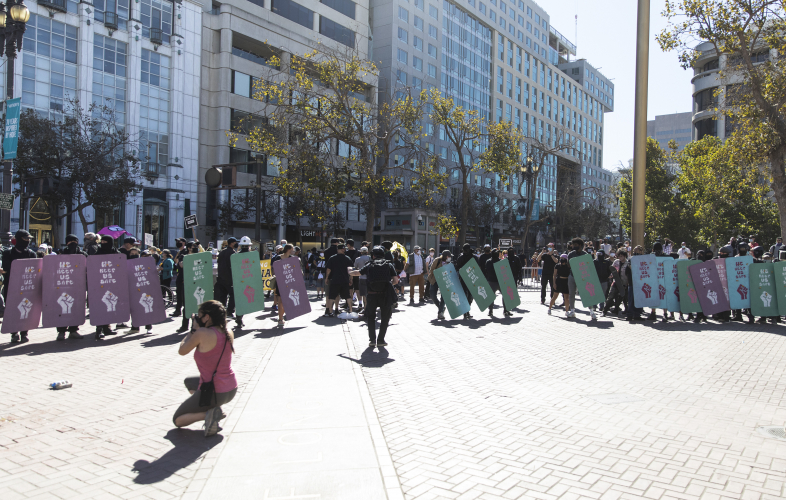 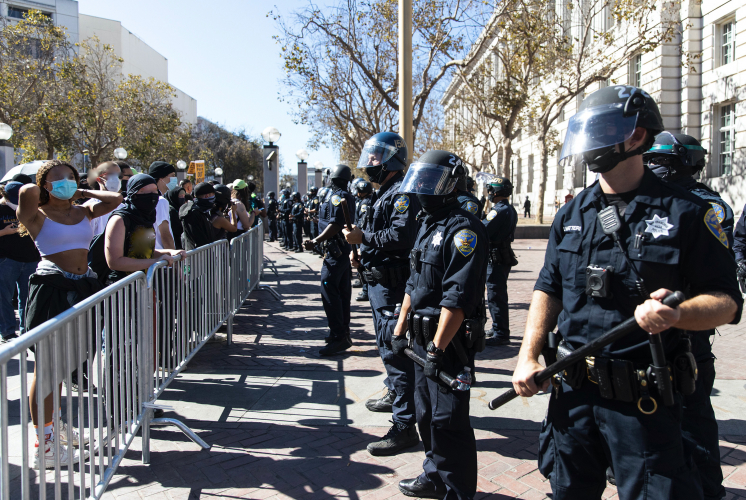 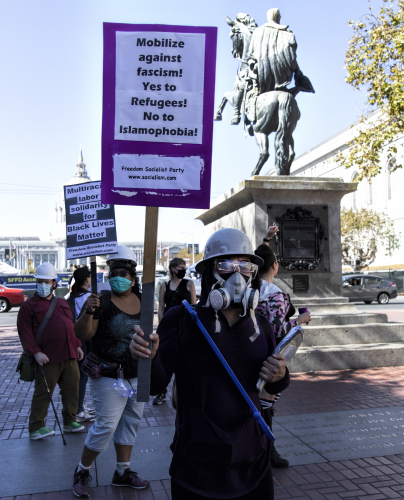 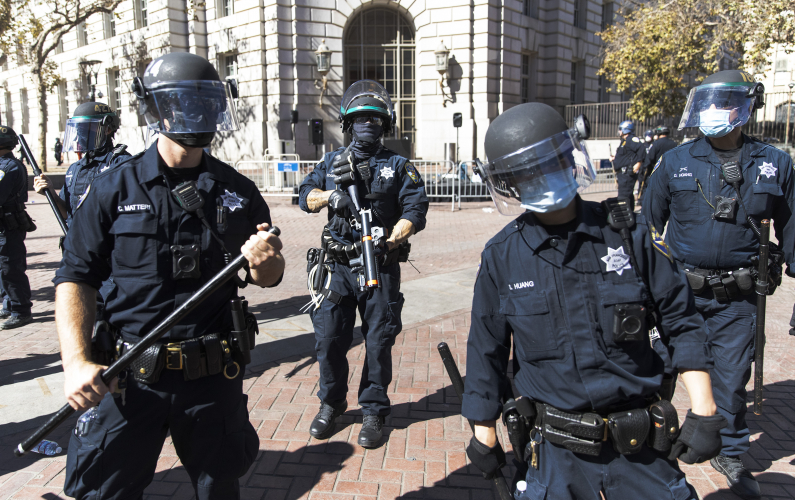 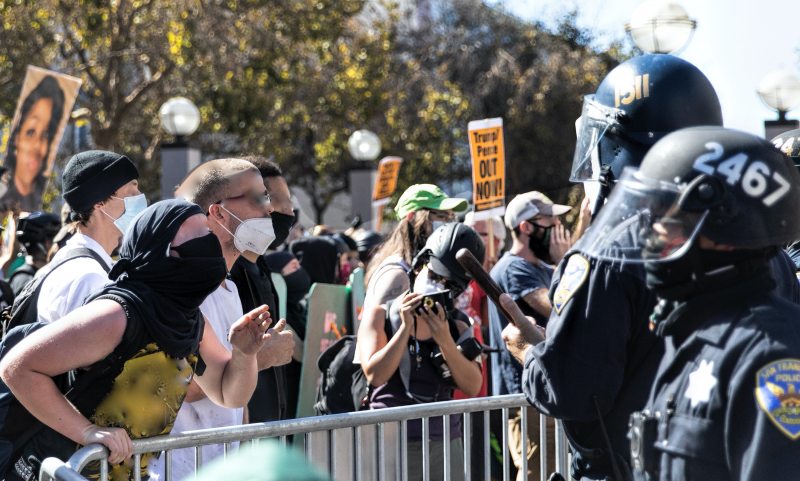 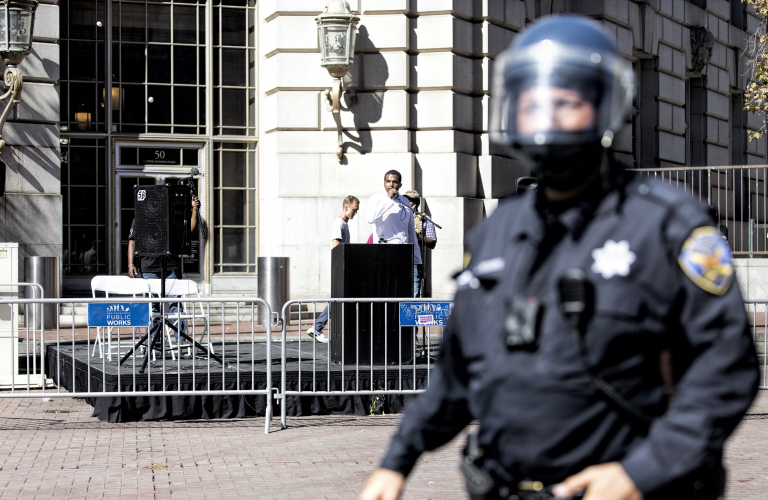 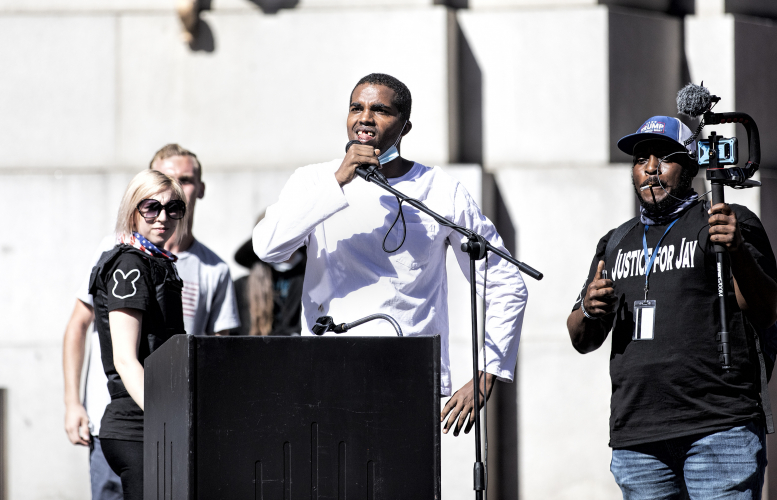 original image (3150x2027)
Speaker shown here Philip Anderson said he was surprised he could speak after losing teeth in the melee. Anderson had said in advertising the event that Enrique Tarrio, leader of the far-right group the Proud Boys, would be attending. But he and other ultra-rightists who were said to be coming, were no shows. Depending on who he was speaking to, Anderson alternatively said he was a Proud boy and "There are no Proud Boys here."