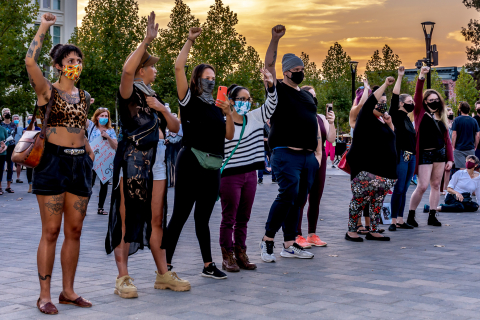 At vigils recalling Ruth Bader Ginsburg's groundbreaking life, speakers said that many civil rights, particularly on abortion rights, could be rolled back. Raising candles, many demonstrators observed silence in her honor, while others voiced serious concern about what her death would mean to the composition of the US Supreme Court and ultimately what it could mean for justice and equality for women and all historically oppressed people.

In the immediate aftermath of Justice Ginsburg's passing on September 18, vigils were held throughout the San Francisco Bay Area including in Oakland and San Francisco, but also in the smaller cities of Santa Rosa, Mountain View and Walnut Creek. A candlelight vigil and call-to-action was live-streamed from the steps of the US Supreme Court with activist speakers from justice groups.

On September 25, President Trump announced his nomination of conservative Judge Amy Coney Barrett as a replacement for Ginsburg, prompting increased concern by women's rights advocates as they are certain she will try to overturn Roe v. Wade.

At Mountain View RBG Vigil Attendees Say They Are Fearful