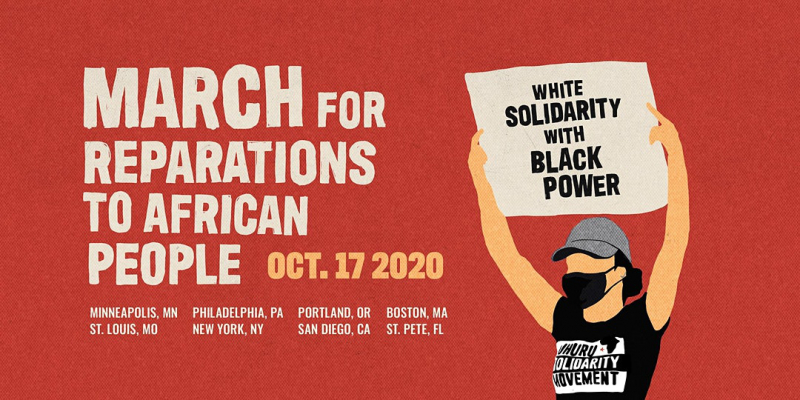 Import event into your personal calendar
Date:
Saturday, October 17, 2020
Time:
12:00 PM - 6:00 PM
Event Type:
Protest
Organizer/Author:
Uhuru Solidarity Movement
Email:
sandiego [at] uhurusolidarity.org
Phone:
5104670370
Location Details:
We will start the March at Waterfront Park, 1600 Pacific Highway and march to 6th and Laurel, Balboa Park.
On October 17th, 2020, thousands of white people will march in support of reparations to the black community in cities across the U.S., including San Diego, as part of the National March for Reparations to African People.

In face of the rampant police terror against black people in the U.S., including the recent shooting of Jacob Blake in Kenosha, Wisconsin, the March for Reparations calls on white people to stand for justice and reparations to the black community.

The organizers describe the March for Reparations as “the way for white people to take a genuine stand in solidarity with the heroic black community uprisings that swept the country after the brutal police murders of George Floyd, Breonna Taylor and Ahmaud Arbery and so many others.”

The March for Reparations has issued a set of demands that includes pressuring Bank of America and other Wall Street banks to pay reparations to an “anti-colonial black economic development program” called the Black Power Blueprint. Also included in the demands is a stop to all U.S. wars, immediate release of political prisoners, and solidarity with Indigenous liberation. This includes supporting the “Free Denzel” campaign of the San Diego International People’s Democratic Uhuru Movement to protest the jailing of local protester Denzel, whose bail has been set as high as that for people alleged of committing multiple homicides!

The San Diego March will conclude at 6th and Laurel with a rally featuring speakers from the Black Liberation Movement. There will be socially distanced vendors, culture, raffles and food. We will do a call for donations as reparations to African People. We ask all participants to wear masks.

The March for Reparations is also a fundraising campaign through its website: https://fundly.com/march-for-reparations/ to generate material support for the Black Power Blueprint and other economic development and self-determination programs of the African People’s Socialist Party.

National organizer Jesse Nevel stated, “It is time for white people to break the silence and march for reparations. We must refuse to be complicit with our own government’s crimes against the black community. Stand in solidarity with oppressed people by waging a struggle with our own ruling class to pay reparations.”
VIDEO TRAILER: https://youtu.be/rs4KDeDPYZ4


END_OF_DOCUMENT_TOKEN_TO_BE_REPLACED
Added to the calendar on Sun, Sep 13, 2020 3:18PM
Add Your Comments
Support Independent Media
We are 100% volunteer and depend on your participation to sustain our efforts!