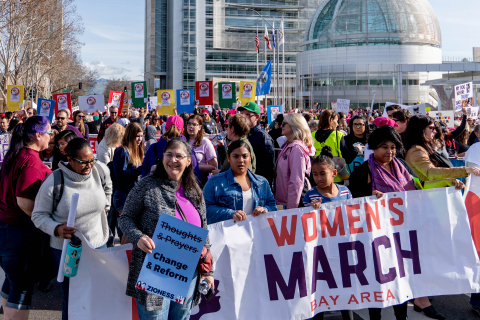 On January 19, at women's marches throughout the Bay Area, the focus was on unity rather than on the rift that split the national group. Optimism was abundant despite a slight decrease in attendance from previous years. The marches were not without critics who cited a lack of attention to the plight of the underhoused and other issues effecting women. Unlike the city of New York where there were two separate marches, however, a spirit of solidarity ruled the day.

The largest marches in the Bay Area were in San Francisco, San Jose, Oakland, and Santa Cruz. There were many other marches in the greater Bay Area including in the cities of Petaluma, Walnut Creek and San Leandro. A San Mateo rally resounded in songs denouncing patriarchy. In the Central Valley, a march in Fresno drew thousands of participants.

Radical Women and the Freedom Socialist Party issued a statement before the marches blaming a mix of forces from the FBI to “so-called men's rights advocates” for trying to prevent a multi-racial, grassroots feminist movement from consolidating and taking off. The joint statement by the two groups called for activists to work together to build a democratic and inclusive feminist movement.

Oppose the "Walk for Life": Stand Up for Women! Trump/Pence Must Go! (Jan 26)