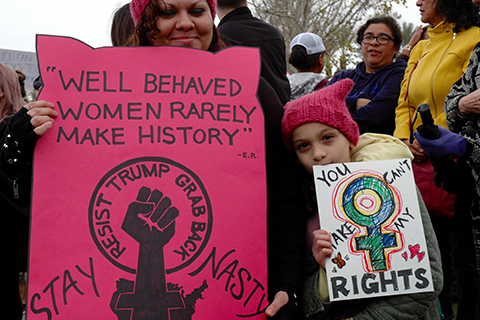 On January 21, one day after Trump was inaugurated as the 45th President of the United States, women and allies in cities across the U.S. and countries throughout the world marched in protest in record numbers. In Washington, D.C., where the original Women's March was called, attendance more than doubled what organizers expected, with around 500,000 attending, far more than had come for the Trump inauguration itself. In Los Angeles, some estimates set the number present at nearly 750,000. In Chicago, the march was cancelled when so many hundreds of thousands showed up that conducting a march became infeasible. There were over 100 demonstrations in California. In Northern California, marches were estimated to be over 100,000 in Oakland and San Francisco. Tens of thousands marched in San José, Sacramento, and Santa Cruz. Thousands came out in Chico, Eureka, Fort Brag, Fresno, Modesto, Napa, Pacifica, Redwood City, Santa Rosa, Seaside, Sonoma, Ukiah, and Walnut Creek.

Organizers of the Women's March in Washington, D.C. wrote: The rhetoric of the past election cycle has insulted, demonized, and threatened many of us — women, immigrants of all statuses, those with diverse religious faiths particularly Muslim, people who identify as LGBTQIA, Native and Indigenous people, Black and Brown people, people with disabilities, the economically impoverished and survivors of sexual assault. We are confronted with the question of how to move forward in the face of national and international concern and fear.

We support the advocacy and resistance movements that reflect our multiple and intersecting identities. We call on all defenders of human rights to join us. This march is the first step towards unifying our communities, grounded in new relationships, to create change from the grassroots level up. We will not rest until women have parity and equity at all levels of leadership in society. We work peacefully while recognizing there is no true peace without justice and equity for all. HEAR OUR VOICE.

Pics and video from Women's March in San Francisco |

Related Features: Mobilization Against the Coronation of Trump | Reclaiming King's Legacy in the Age of Trump | We've Got a Bigger Problem Now