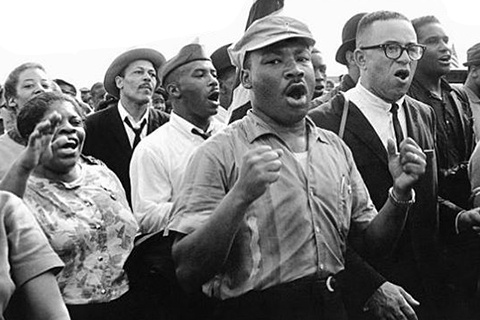 The Anti Police-Terror Project (APTP) writes: We call for a national week of direct action beginning on Martin Luther King day and culminating on Inauguration day. We intend to set a tone for the next four years of resistance: direct actions and street mobilizations to resist Trump's political agenda, and a banding together in our workplaces, schools, and communities to keep ourselves safe from Trump's violent supporters.

Before King's assassination, he began organizing the Poor People's Campaign designed to unify working people across the country. He spoke out forcefully against US imperialism abroad and the US war in Vietnam, in particular.

For 120 hours, we will show that we refuse to be governed by bigotry, we reject Donald Trump and his agenda, and we will resist the new fascistic "normal" by calling forth our collective people power to shut the system down.

Below are publicly announced events. Some actions during the week will be held without notice. Stay tuned as events develop and more information becomes available.

Teach-in: Education is Our Right (Oakland) |

Hands Around The Plaza - Unity Through Diversity (Watsonville) |

Know Your Rights: A training in support of 120 Hrs of Protest (Berkeley)

ILWU10 Members Speak Out On Trump, Capitalism, The Need For Workers Party And Take Action

A Protest Action of Conscience and Resistance: No Wall! No Mass Deportations! No “Muslim Registry"!, 8am |

Tech Workers for Racial Justice, 10am |

Requiem for a Dream: A Resurrection of Hope, 5pm |

Rise Up for Justice Inauguration Day, 11am |

J20 Inauguration Day WALK OUT at UCSC, 9am

Vigil for Peace and Justice, 8am |

Not My President - Fresno Event, 6pm

Related Features: Millions of Women Take a Stand Against Trump the Day After Inauguration | Mobilization Against the Coronation of Trump | With Election of Trump as Next US President, Cities Across the Country Rise Up in Protest | Martin Luther King Jr's Radical Legacy Lives On (2016) | Bay Area Pulls Off 96 Hours of Action as Part of National Call to "Reclaim King’s Legacy" (2015)