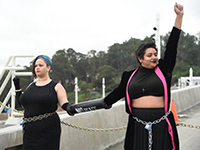 The Anti Police-Terror Project (APTP) writes: Over the last year, in the Bay Area alone, there have been dozens of police murders. In San Francisco, we have most recently seen the brutal execution of Mario Woods, in addition to police beating a disabled man in front of the Twitter building and racist text messages exchanged between SFPD on-duty officers. In Oakland, we have seen a string of Black men murdered by police since only June of 2015. In fact, a recent graphic by Mapping Police Violence shows that in 2015, Oakland ranks third in police killings per million people in 60 of America's largest cities.

APTP has called for the Second Annual 96 Hours of Direct Action and Reclaiming King’s Radical Legacy March. For four days, hundreds of community members from over two dozen groups in both Oakland and San Francisco will unleash a spectrum of disruptive and creative activity. In the spirit of MLK, these actions will meaningfully interrupt business as usual whether that be with direct action, teach-ins, concerts or prayer vigils.

Friday 1/15: Communities in Oakland and San Francisco will hold actions calling out the rampant gentrification occurring on both sides of the bridge.

No Sprouts In Oakland: Stop Gentrification of Local Food Economy |

"Can You See Me?" Interfaith Procession in Remembrance of Black Lives |

Saturday 1/16: The Oakland Community will call out the many forms of state terror occurring in The Town. Unannounced actions included a protest at the home of mayor Libby Schaaf in Oakland and police chief Sean Whent in Brentwood.
Event announcements:

Will their killing of MARIO WOODS be exploited by SFPD to acquire Tasers? HELL NO!!! / SF Forum On The Danger Of Tasers |

Sunday 1/17: The people will unite in San Francisco to call out state terror, economic terror and the corrupt city governments that allow it to continue. Unannounced actions included demonstrations in front of the homes of mayor Ed Lee and police chief Greg Suhr.

Visions for Racial Justice in Oakland: A Community Conversation |

Monday 1/18: Second Annual Reclaim King’s Radical Legacy March from Oakland to Emeryville. Unannounced was a shutdown of the Bay Bridge.

Pre-March Protest in Solidarity with the fighting people of Haiti |