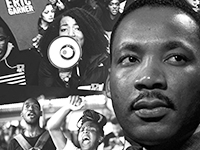 In Oakland, hundreds of people from more than two dozen groupings organized in response to the Anti Police-Terror Project’s call to come together for ninety-six hours of direct action over the Martin Luther King Day weekend, from January 16 through 19. They joined thousands of others across the country responding to a call from Ferguson Action to reclaim Dr. King’s legacy of militant direct action in opposition to economic violence as well as police violence and discrimination. The first action announced was a protest inside Montgomery BART station in San Francisco at 7am on Friday. The weekend’s events culminated in a Jobs and Economy March for the People on Monday, January 19, beginning at 11am at Oscar Grant/Fruitvale BART station in Oakland.

The ninety-six hours of direct action across the Bay Area highlighted the unjust economic and political structures that King fought to defeat. Thousands unified, regardless of skin color, religion, or creed to reclaim King’s legacy and act, in tandem, against police and economic violence, two primary tools of white supremacy. Actions took place throughout the Bay Area, at BART stations, community meetings and street corners and came in the form of shut downs, guerrilla theater, teach-ins, and concerts. On Martin Luther King Jr. Day, activists in Oakland staged a pre-dawn home demo at the house of new mayor Libby Schaaf before protesters held a large march through the neighborhoods where systematic and state sanctioned murder of Black, Brown, and Poor people occur most.

March For Black Community Control Of The Police! |

Shut It Down: WAL-MART Edition |

From Oscar Grant to Ferguson: Racism and Police Repression in America
Monday:

Lawyers and Public Defenders for #blacklivesmatter |

Photos and video from #BARTFriday: NO BUSINESS AS USUAL |

Rebellion and Resistance from Ferguson to Ayotzinapa
Monday:

Free Movie: Do the Right Thing