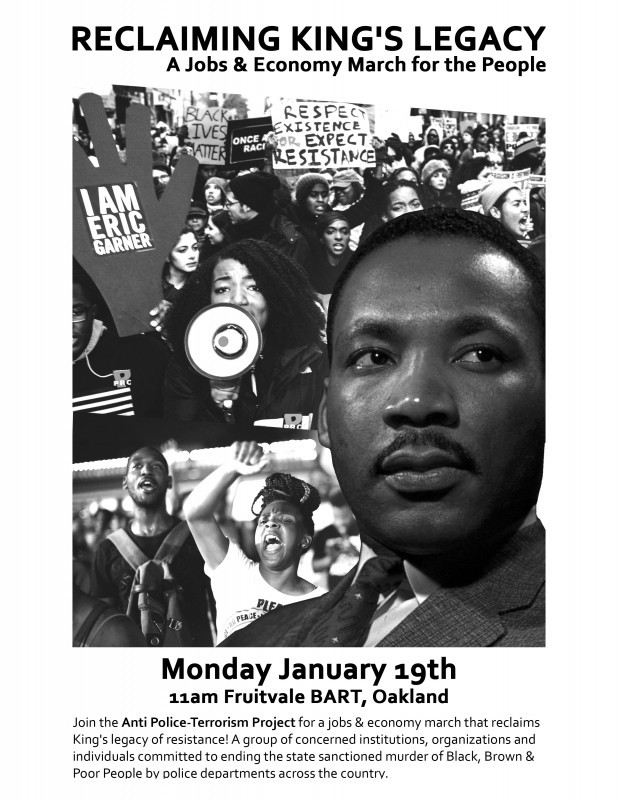 (Oakland, CA) - Hundreds of people from more than two dozen groupings are responding to the Anti Police-Terror Project’s call to come together for 96 hours of direct action over the Martin Luther King Day weekend, January 16 – 19, 2015. We will join thousands around the country responding to a call from Ferguson Action to reclaim Dr. King’s legacy of militant direct action in opposition to economic violence as well as police violence and discrimination. This weekend’s events culminate in a Jobs and Economy March for the People on Monday, Jan. 19, beginning at 11 a.m. at Oscar Grant station (Fruitvale BART).

“We know through painful experience that freedom is never voluntarily given by the oppressor; it must be demanded by the oppressed.” - (1963) Dr. Martin Luther King Jr.

Monday, we will connect the dots between police violence and economic violence with a march at 11 am from Fruitvale Station, where Oscar Grant III was murdered by BART police, in solidarity with Ferguson, New York, Cleveland, Sanford, Salt Lake City, and countless others who too have lost young Black men to police terror. We know well the grief that comes when brothers, sisters, sons, daughters, mothers and fathers are gunned down by those who are supposed to “protect and serve.” We march to reclaim King’s legacy and demand an immediate end to the war being waged on Black people in America.

“Actually, we who engage in nonviolent direct action are not the creators of tension. We merely bring to the surface the hidden tension that is already alive. We bring it out in the open, where it can be seen and dealt with.” - (1963) Dr. Martin Luther King Jr.

Our march concludes at the Coliseum City project in East Oakland, where half of Oakland’s Black population has already been displaced, as the city seeks to continue the trend of economic violence that has plagued this part of Oakland for decades. What began as redlining, and continued through a lack of outside investment and predatory lending ultimately has decimated our neighborhoods. This project’s projected outcome does little to serve the immediate communities of color and does much to serve football fans and entertainment seekers. We march to demand an end to economic violence, police violence, educational violence and psychological violence that is perpetrated without consequence in our communities.

Specific demands around Coliseum City include:

- A local hiring policy that ensures 50% of the jobs go to Black people and the disenfranchised who are on probation and parole
- A Health Impact Assessment that lays out how many Oakland residents will be displaced as a result of this development and other undesirable outcomes
- A commitment to proving living-wage jobs with benefits to all employees of the Coliseum City project from the janitor to the retail clerk.


“We must rapidly begin the shift from a thing-oriented society to a person-oriented society. When machines and computers, profit motives and property rights, are considered more important than people, the giant triplets of racism, extreme materialism, and militarism are incapable of being conquered.” - (1967) Dr. Martin Luther King Jr.

The upcoming 96 hours of direct action across the Bay Area will highlight the unjust economic and political structures that King fought fiercely to defeat. Thousands will unify, regardless of skin color, religion, or creed, as we reclaim King’s legacy and act, in tandem, against police and economic violence; two primary tools of white supremacy. Actions will take place throughout the city, at BART stations, community meetings and street corners and come in the form of shut downs, guerilla theater, teach-ins and concerts. Monday, we march through the neighborhoods where systematic and state sanctioned murder of Black, Brown, and Poor people occur most.

The Anti-Police Terrorism Project is a project of the ONYX Organizing Committee that in coalition with other organizations like the Community Ready Corps, the Alan Blueford Center for Justice, Workers World and Healthy Hoodz is working to develop a replicable and sustainable model to end police terrorism in this country. We are a group of concerned and committed institutions, organizations and individuals committed to ending state sanctioned murder of Black, Brown & Poor People. We are led by the most impacted communities but are a multi-racial, multi-generational coalition. We meet every 3rd Thursday of every month at Eastside Arts Alliance at 7:30 p.m.
§Reclaiming Kings Legacy: A Jobs & Economy March for the People (facebook)
by APTP Monday Jan 12th, 2015 7:56 PM
facebook page:
https://www.facebook.com/events/6962312204...
Add Your Comments
LATEST COMMENTS ABOUT THIS ARTICLE
Listed below are the latest comments about this post.
These comments are submitted anonymously by website visitors.