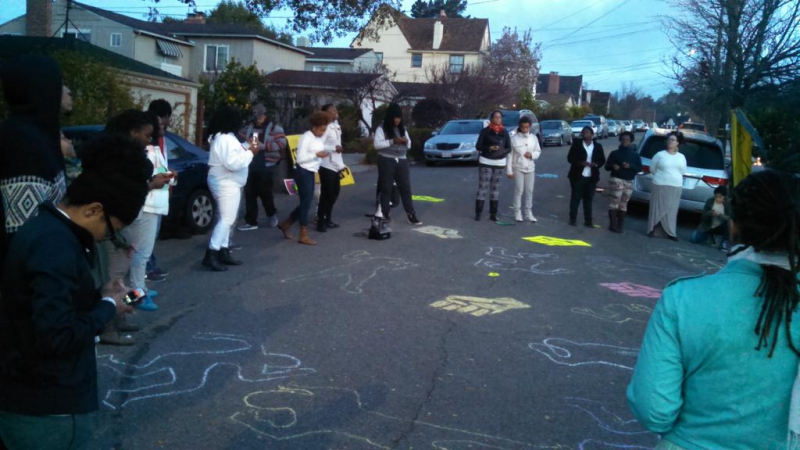 original image (1024x576)
[ Photo by @DaveId on Twitter. Speaker declares that until @libbyformayor meets with them to hear demands she won't be allowed to sleep. #ReclaimMLK ]

The group had unsuccessfully attempted to meet with the mayor shortly after it it was revealed that she spent her first day in office meeting and hanging out with Oakland police officers. She asserted they were her priority.

Folks in Oakland found this to be beyond disturbing as they pointed out that 80% of OPD doesn't live in Oakland, hence they didn't vote for her. In addition it was revealed in a recent internal poll leaked to the media, that more than 60% of OPD don't like Oakland because they feel it's too progressive.

Lastly OPD has cost the city of Oakland close to 60 million dollars in police brutality settlements over the past 10 years with more to come. That figure is more than what San Jose and San Francisco has paid combined.

The Black Lives Matter activists read off a list of 19 demands, many of which came out of Ferguson while others are unique to Oakland and California. Among the demands was cutting all ties to Israel and not having OPD train with them.

They want officers with records of abuse to be fired and not allowed to be hired from other departments. They want Mayor Schaaf to join the fight to repeal California's Policeman's Bill of Rights which keep police officer's records of brutality and shooting of suspects sealed from both the publicans other departments. They also the Oakland school police dept to be disbanded.

Demonstrators pointed out as a gaggle of police showed up and sealed off the block, that Shaaf sent 'her homies' from OPD to meet with the collective before she sent an aid or even opened the door to talk with folks herself...

One highlight of the early morning direct action was hearing folks flip the song 'I love the Coco' which is about doing coca in and played routinely on the radio to 'We have no love for the Popo'. Another was hearing a searing poem from Sarah O'Neal of Youth speaks about why Black Lives Matter.

The group noted they had inherited MLK the dreamer and were reclaiming King, the radical confrontational direct action freedom fighter...
https://www.facebook.com/mrdaveyd/posts/10...
Add Your Comments
LATEST COMMENTS ABOUT THIS ARTICLE
Listed below are the latest comments about this post.
These comments are submitted anonymously by website visitors.