Newswire
Calendar
Features
Home
Donate
From the Open-Publishing Calendar
From the Open-Publishing Newswire
Indybay Feature
Publish to Newswire
Add an Event
Related Categories: San Francisco | Police State & Prisons | Racial Justice
Reclaim MLK - BART Friday Shuts Down SF Stations, Disrupts Morning Commute, 1/16/15: photos/video
by Dave Id
Monday Jan 26th, 2015 11:57 PM
In solidarity with Black Lives Matter activists across the country who set out to "Reclaim Martin Luther King's Legacy" for MLK Day 2015, Oakland's Anti-Police Terrorism Project (APTP) called for 96 hours of direct action in the San Francisco Bay Area. Kicking off the four-day weekend of publicly announced actions in the Bay Area was a Friday morning mass convergence that began within the Montgomery Street BART station in San Francisco. Around two hundred demonstrators were able to shut down at least three downtown stations for varying lengths of time as groups of protesters moved from station to station over the course of two and a half hours. There were two arrests. (Photos and video below.) 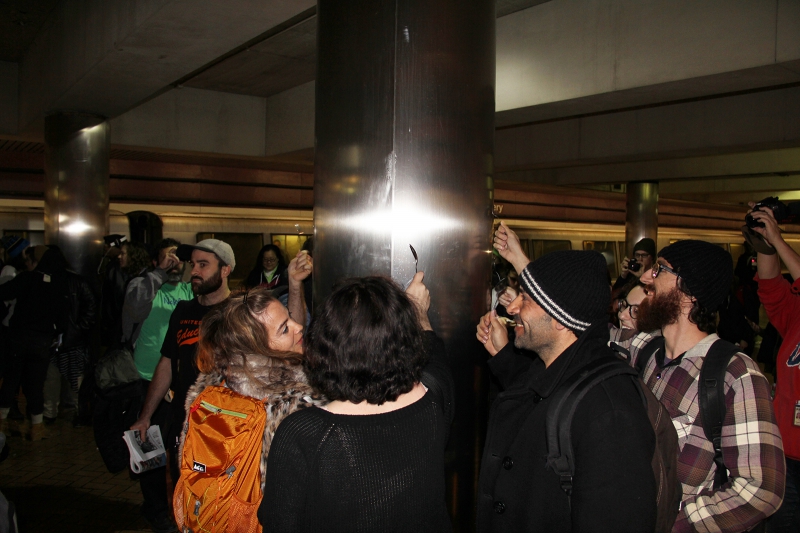 original image (1600x1067)
[Spoons were the big mystery element in the public callout for the action, with one local corporate media outlet ridiculously publishing a report that the spoons could be sharpened into shivs or being used to disable the electric third rail on BART tracks.]

BART, of course, has a long history of perpetrating injustices against African Americans in the Bay Area, from the massive displacement of Black businesses on 7th Street in Oakland when the transit system was first conceived and constructed as a mode of transportation for wealthier suburban commuters to BART’s recent Civil Rights Act violations regarding the now-completed Oakland Airport Connector.

Over the course of its history, BART police have killed several unarmed African American men including Oscar Grant. Such behavior continues to this day with the recent brutalization of passengers such as Nubia Bowe and others.

A public call went out to protest on the Montgomery Street BART station on Friday, January 16, at 7am sharp, and to bring a metal spoon. Three demands were issued:

3. Drop all the charges and fines against the BlackFriday14

As protesters began to gather in the station, before the protest officially commenced, BART prevented eastbound trains from dropping off or picking up new passengers. Those trains would stop in the station but not open their doors. A woman in a wheelchair banged incessantly on the door, but the train operator would not let her off of the train. Westbound trains heading deeper into San Francisco continued to allow passengers on and off in the station. About 10 minutes past 7am, protesters began to bang their spoons on station support columns, the platform floor, and BART trains. BART quickly began to announce via their in-station electronic message signs that the station was closed. The noise created by the spoons made the station far too loud for any possible verbal police commands to be heard.

A westbound train stopped in the station and a single door opened or was forced open. Protesters began to flood the train and hold the door open but BART personal and police eventually forced protesters out of the way to allow the door to close and the train to move to the next station. One protester who reportedly banged a spoon on the train was arrested and carried from the station when he went limp.

A good number of protesters stayed and held the Montgomery station which remained closed for most of the morning commute. At one point about an hour after the protest began, BART police grabbed a woman with a cane from a BART train door in Montgomery station, tackling and arresting her. Word is that police held her for ten hours and disappeared her cane, "finding" and returning it several days later. The two arrests appeared somewhat random, since those arrested were reported to have done nothing different than any other protester.

Shortly after BART began displaying the "station closed" messages, with trains passing through Montgomery but not allowing protesters, or passengers, to board, many protesters headed up to street level and marched up Market Street to the Embarcadero station. Arriving in two groups, the first protesters to arrive were able to make it down to the platform level where they continued to bang their spoons. The second group, arriving later after having watched a dance performance by Get Up Street Theater on Montgomery Street, were not able to make it past BART police blocking stairwells, escalators, and fare gates in the Embarcadero station. Those below on the platform level could be heard banging their spoons, and they remained at Embarcadero, with BART choosing to keep the station closed for the duration of the protest, until after 9am.

The second group unable to reach the Embarcadero platform then marched back on Market Street past the Montgomery station, which never fully re-opened, to the Powell Street station, making it to the platform level. BART responded by sending trains through the station without stopping. At that point three of four downtown stations were closed simultaneously. Protesters remained in at Powell until around 9:30am and then dispersed of their own accord, and BART began operating according to its normal schedule again.

During the protest, BART had called for "mutual aid" with MUNI and scrambled to direct passengers and its own police force to travel between stations using MUNI trains. The only downtown station untouched by the protest was Civic Center.

The same morning as the BART action, there was also an unannounced pre-dawn lockdown the Federal building in Oakland.

The idea behind reclaiming MLK’s legacy is to rescue it from the sanitized version whereby King has been painted by liberals for decades as a make-nice or passive historical figure rather than the defiant radical fighting for justice that he actually was. MLK was very much controversial and often despised, not at all adored by the majority of whites in America, at the time of his assassination.


Indybay Coverage of the Justice for Oscar Grant Movement
https://www.indybay.org/oscargrant 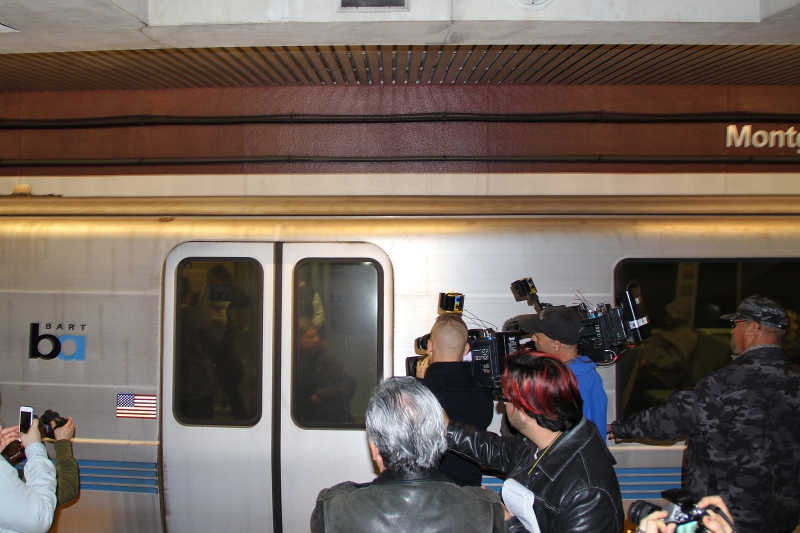 This video offers a quick sample of the action as it began, with the sound of a couple of hundred spoons clanking in a BART station. 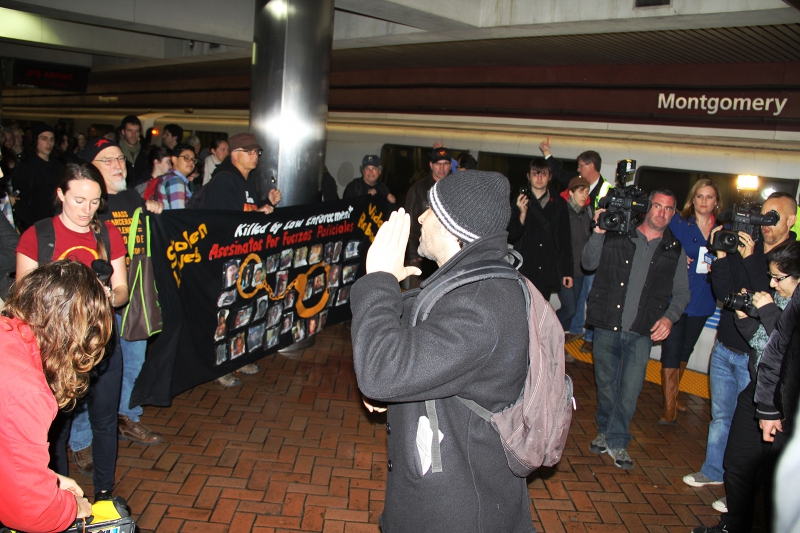 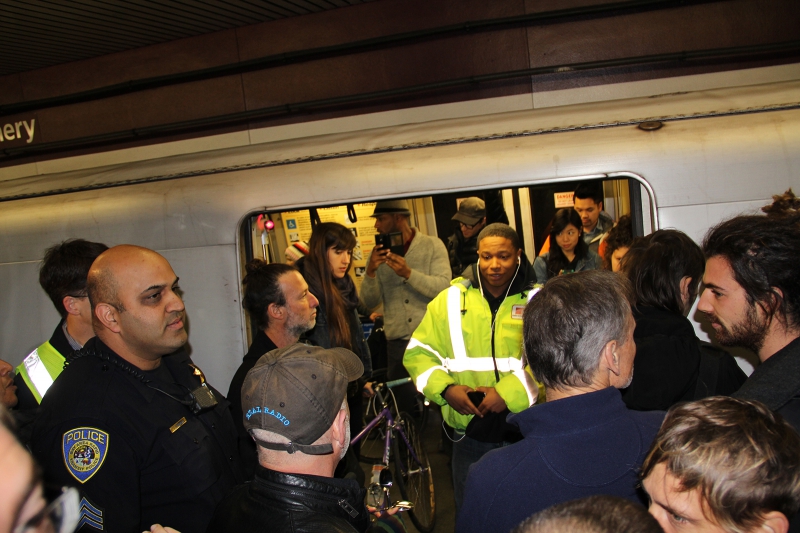 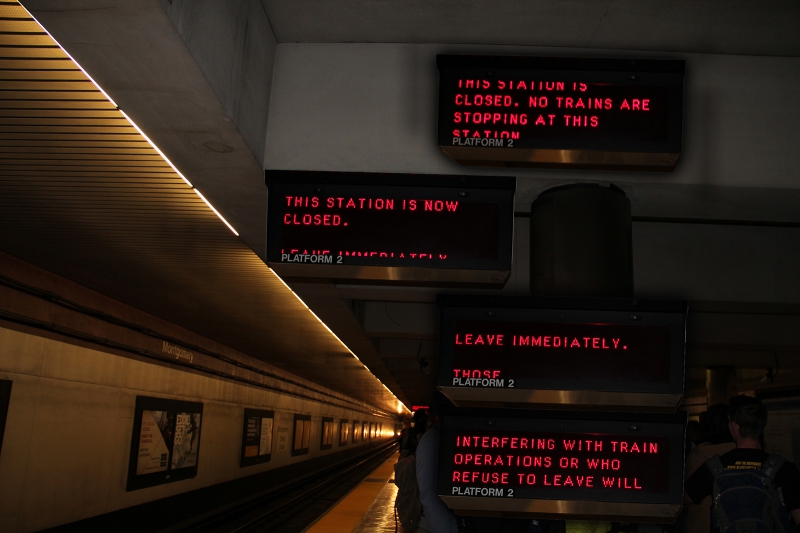 original image (1600x1067)
Obviously, this is a composite photograph. Hadn't seen this full string of messages at previous protests. Messaging ends with "Those interfering with train operations or who refuse to leave will be arrested." Nevertheless, protesters remained on the Montgomery station platform for another two hours. 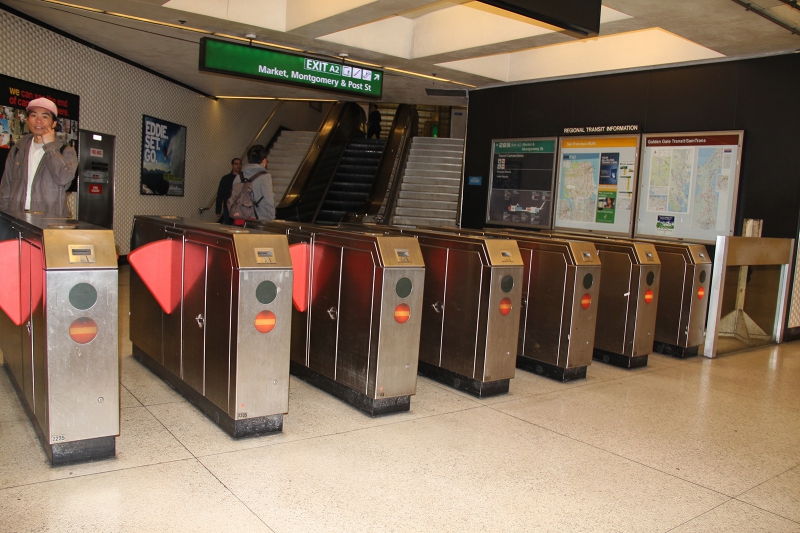 original image (1600x1067)
This slowed protesters from proceeding to the next station, if they didn't want to forfeit the usability of their BART tickets to re-enter the system, since they individually had to get a stamp from the station agent on their tickets. 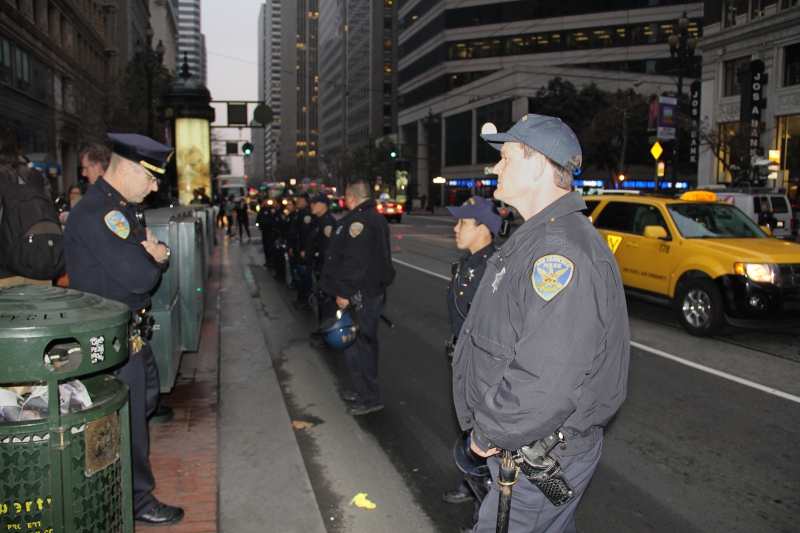 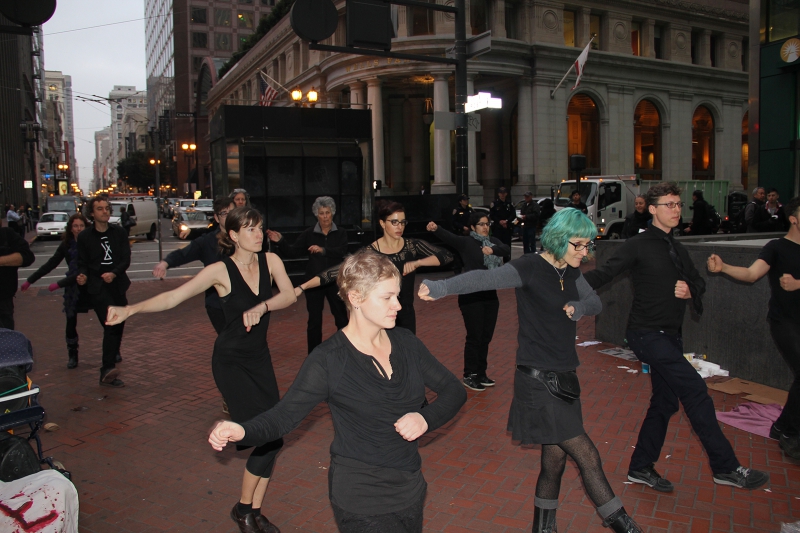 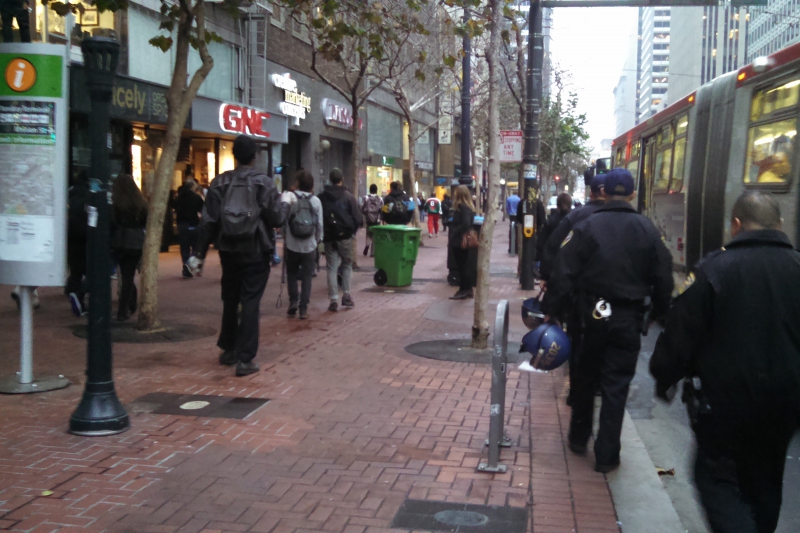 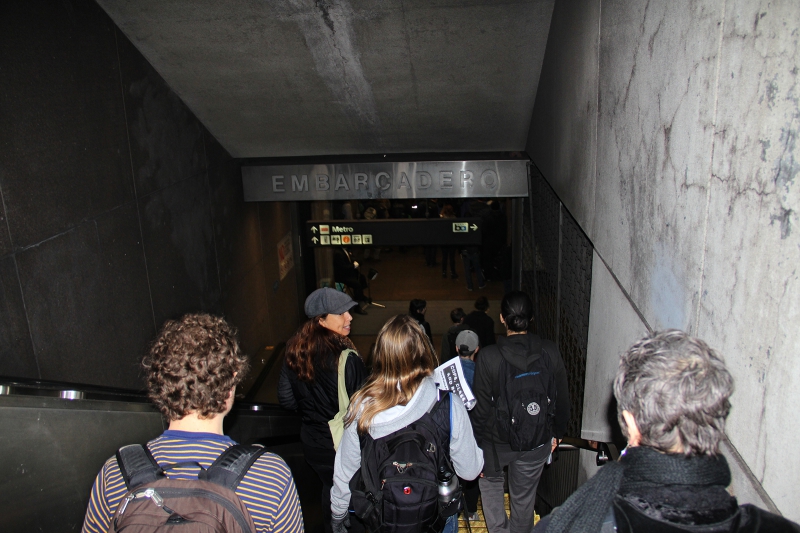 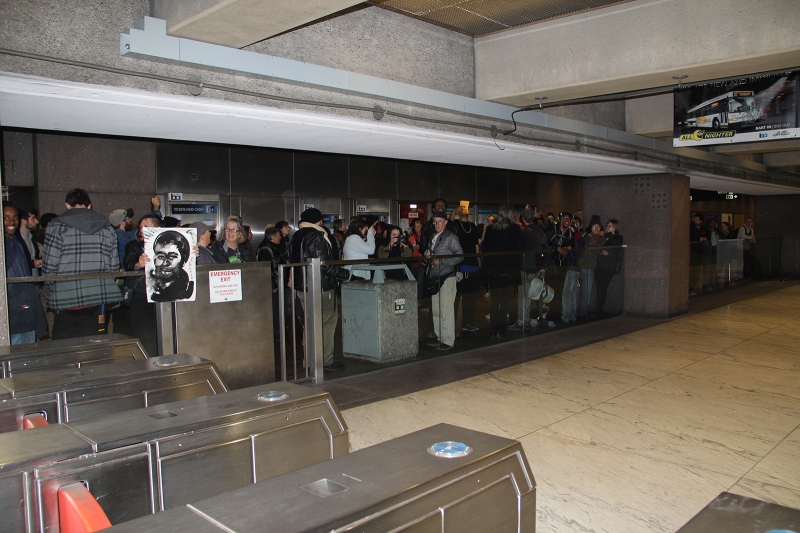 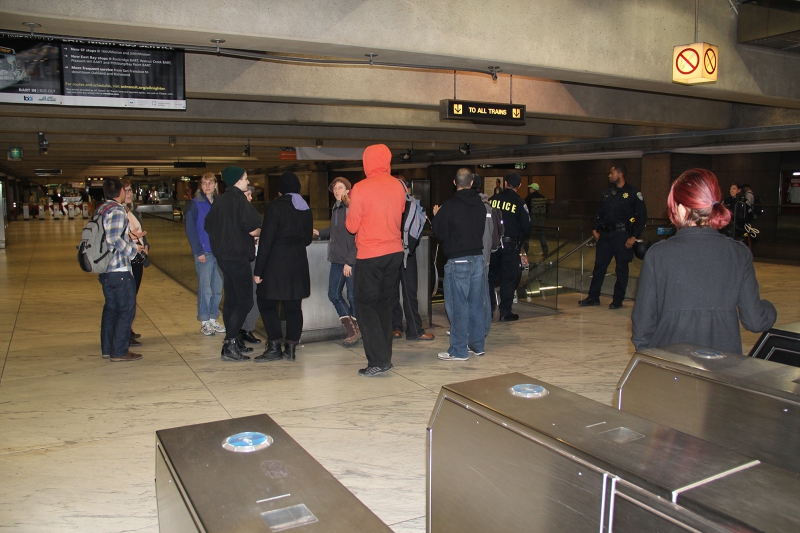 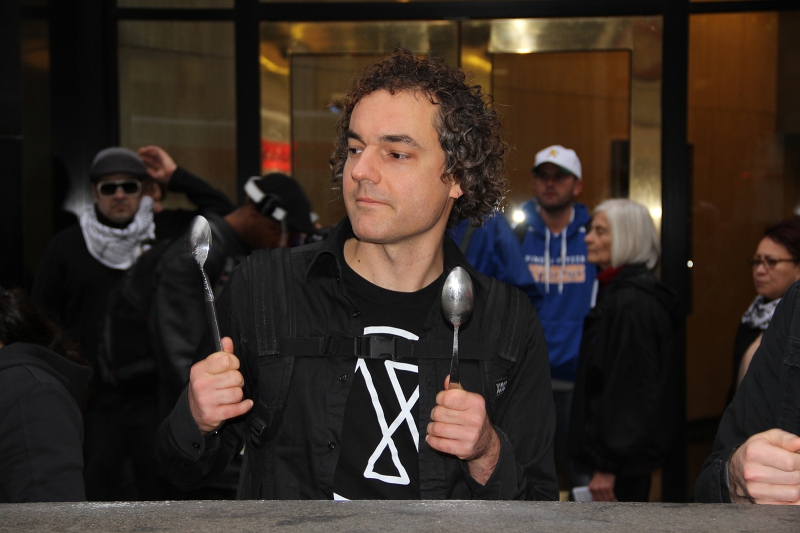 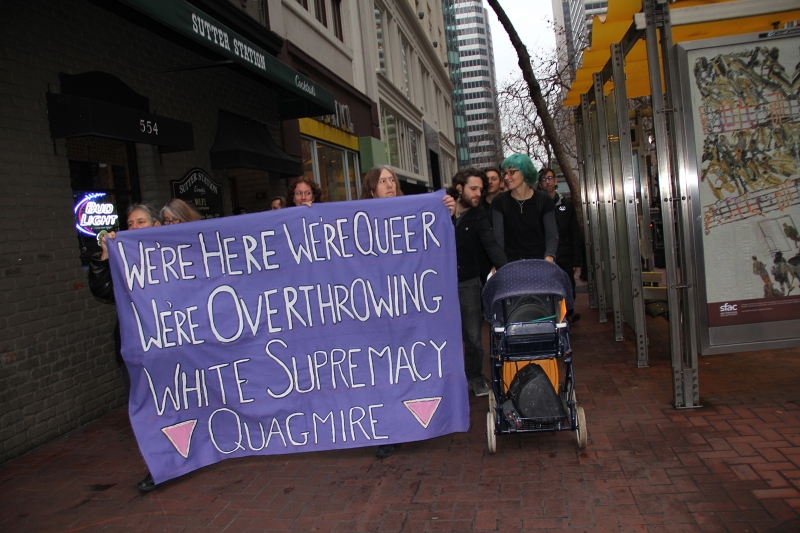 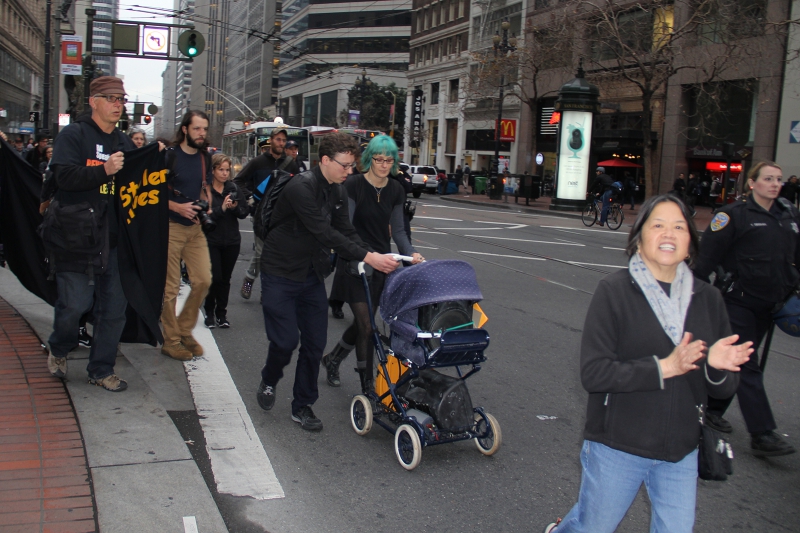 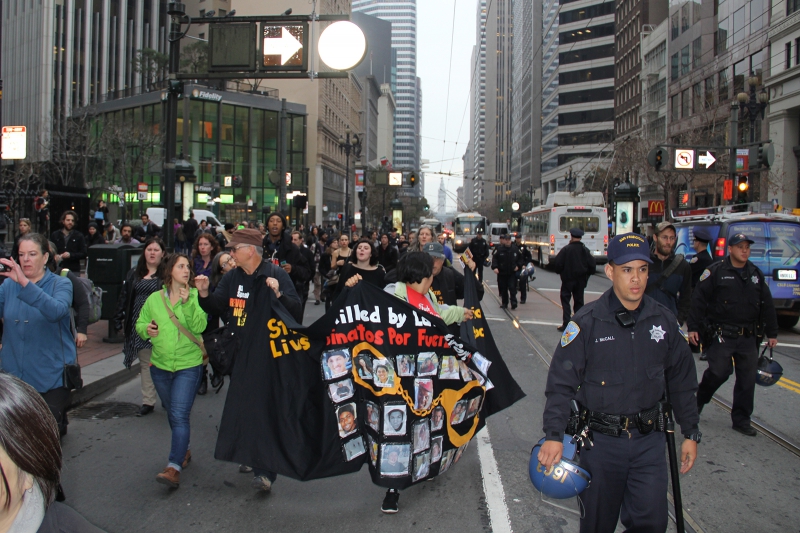 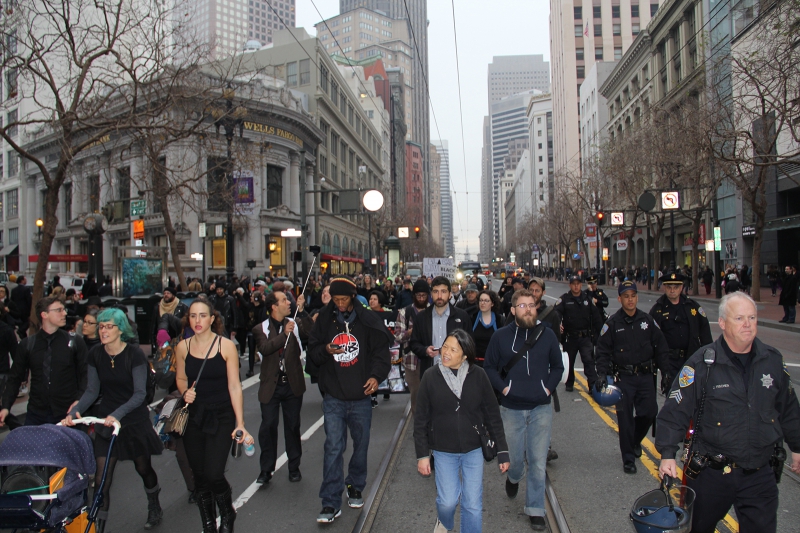 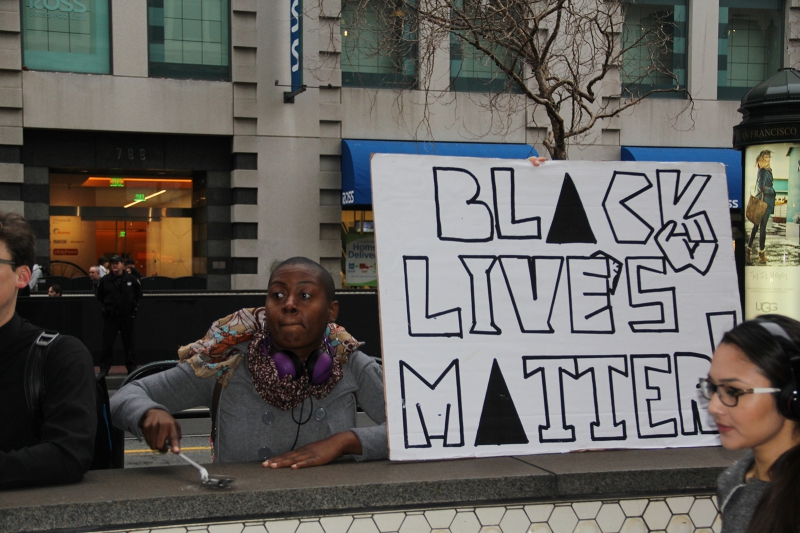 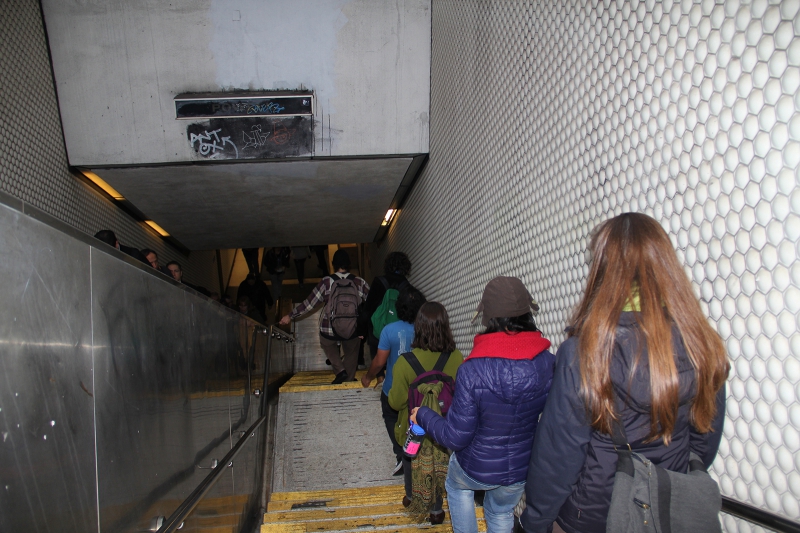 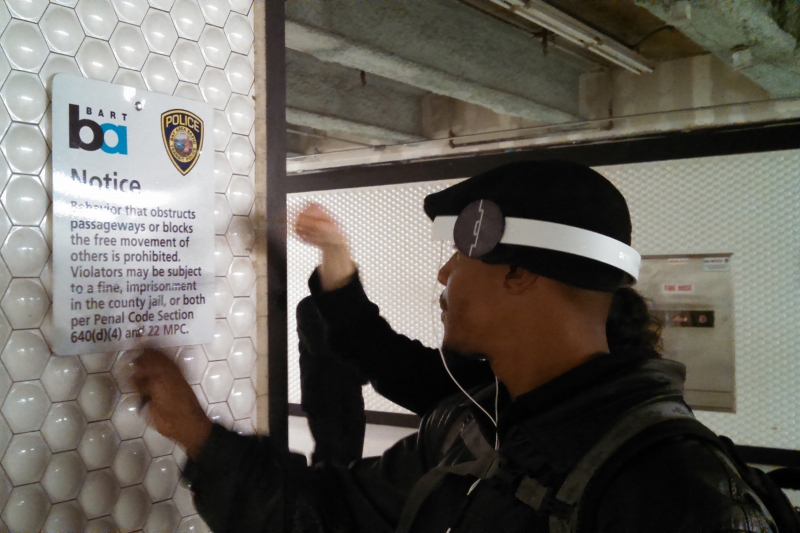 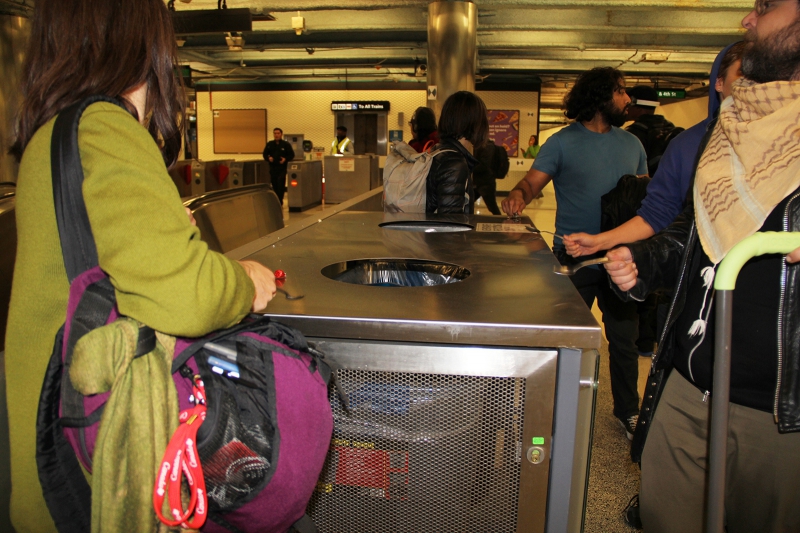 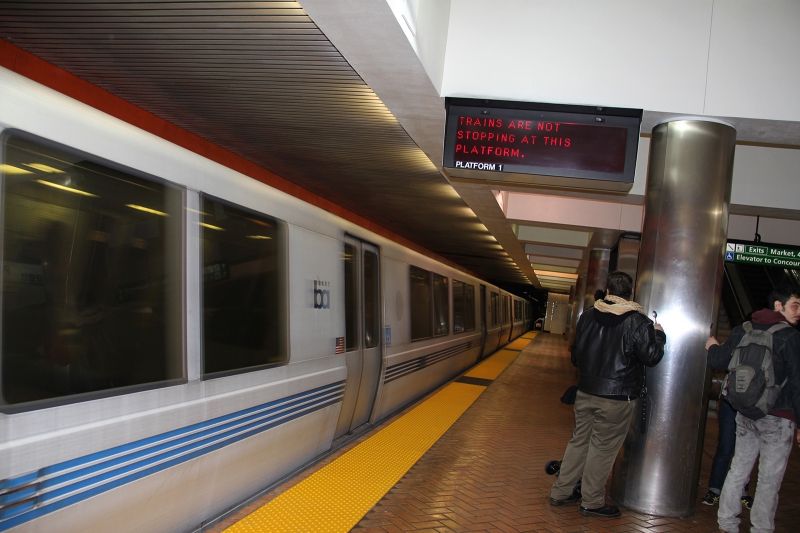 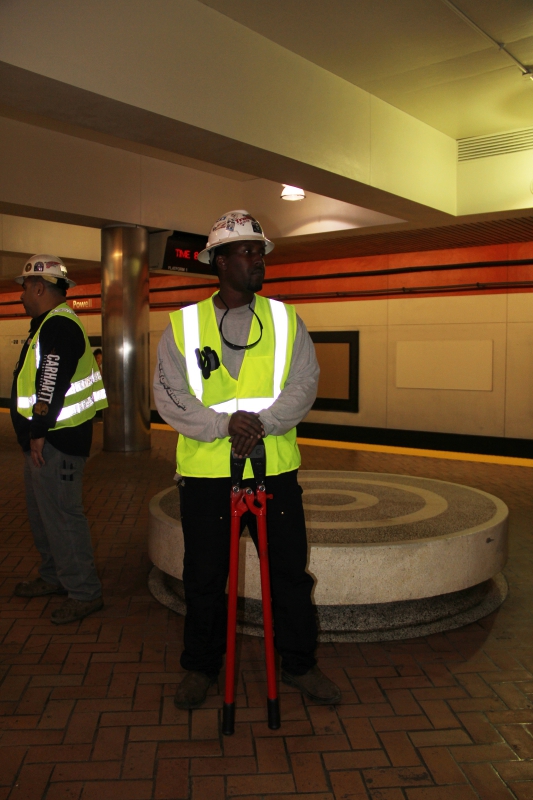 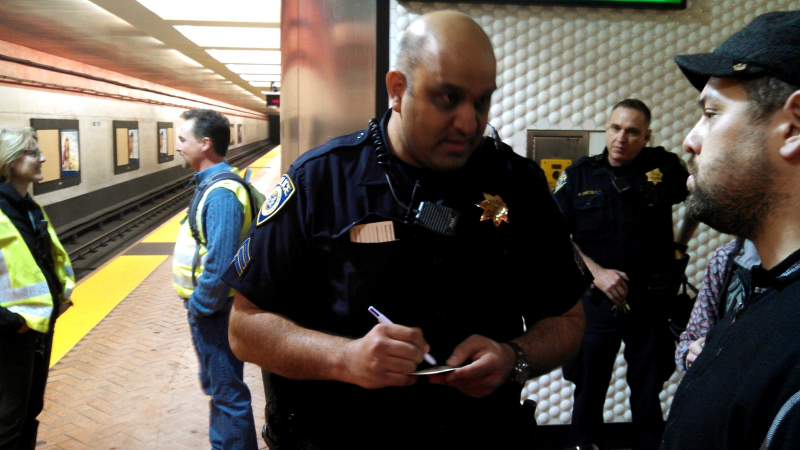 original image (1600x900)
The woman and man in the background were part of a 4-5 person team stalking Krystof. (The two pictured here are the same ones who followed him at several protests in years past. See https://www.indybay.org/newsitems/2011/09/04/18689414.php#18689416.) The woman made revealing small talk while tailing Krystof. She said something to the effect of, "We haven't seen you for a while. You were in Los Angeles last month. Did you have fun there?" The vests stopped following Krystof after BART officer Sekhon told them to go away. Incidentally, Sekhon used to be president of the BART Police Officers' Association. See https://www.indybay.org/newsitems/2009/08/14/18615770.php for a related report. 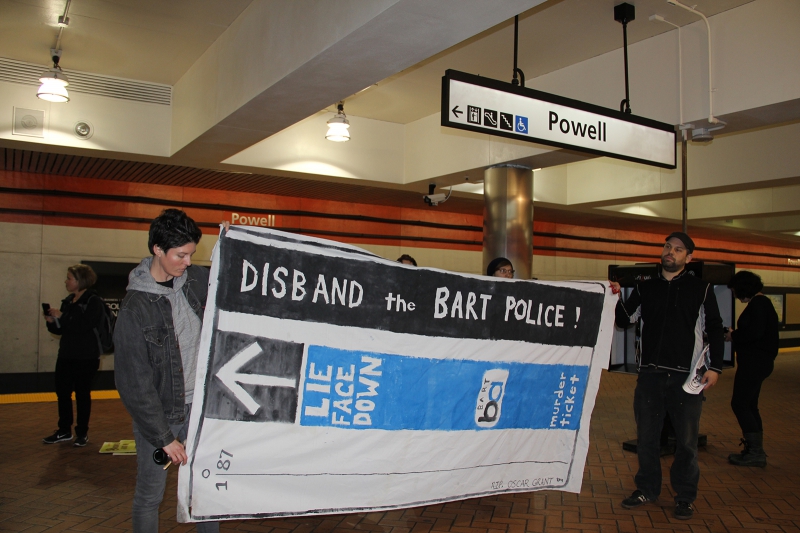 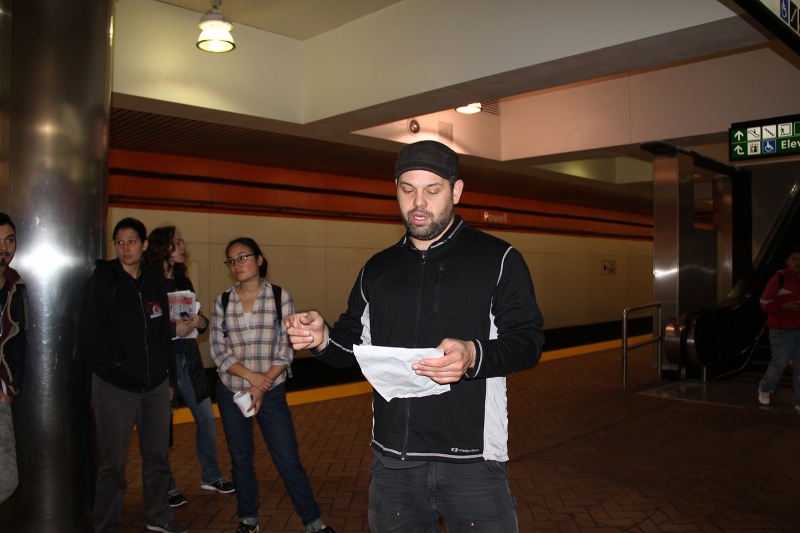 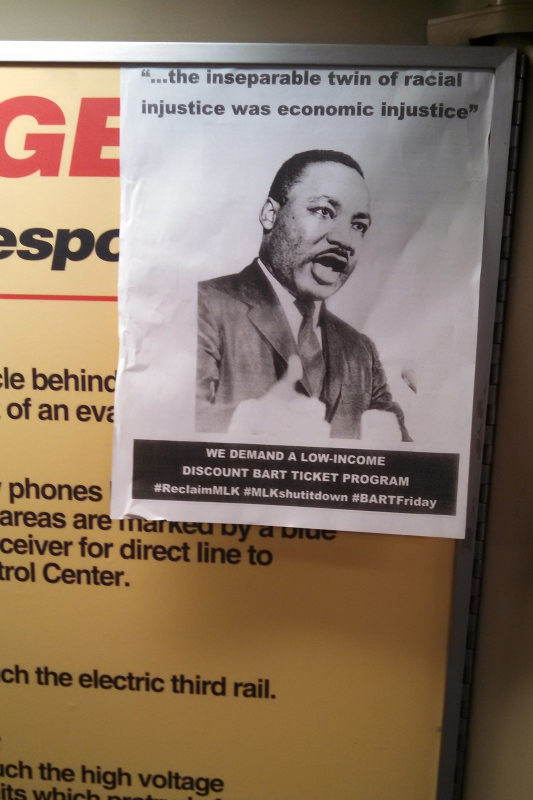 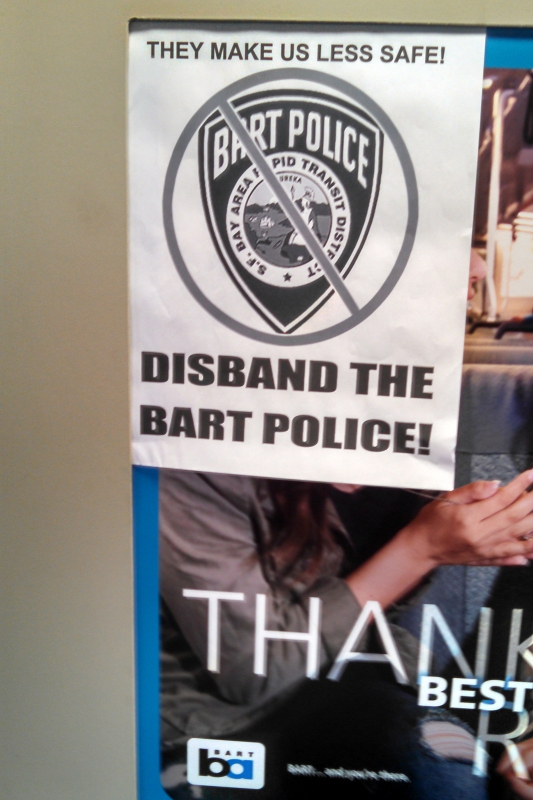