Add an Event
Newswire
Calendar
Features
Home
Donate
From the Open-Publishing Calendar
From the Open-Publishing Newswire
Indybay Feature
Publish to Newswire
Add an Event
Related Categories: San Francisco | Police State & Prisons
Anonymous #OpBART-3 Protest - BART PD, SFPD, Sheriffs, DHS, & DOJ, 8/29/11: photos, 1 of 2
by dave id
Sunday Sep 4th, 2011 2:24 PM
On August 29th, the third OpBART demonstration called by Anonymous worked its way from Civic Center/UN plaza down the sidewalks of Market Street to the Powell Street, Montgomery Street, and Embarcadero BART stations in downtown San Francisco. As has become customary for these protests, BART PD, SFPD, SF Sheriff's Deputies, Department of Homeland Security officers, and the media were out in force. This time, however, protesters did not demonstration on station platforms and BART chose not to close any of the downtown stations. Protesters did speak out and chant against BART police violence in the non-paid areas of three stations, having been granted explicit permission at the Powell Street station by BART "Tactical Team" (i.e riot police) officer Franklin. Video from the demonstration can be found at http://www.indybay.org/newsitems/2011/08/31/18689178.php. This photo series includes coverage from throughout the action, leading up to the two "free speech" arrests at the Embarcadero station. 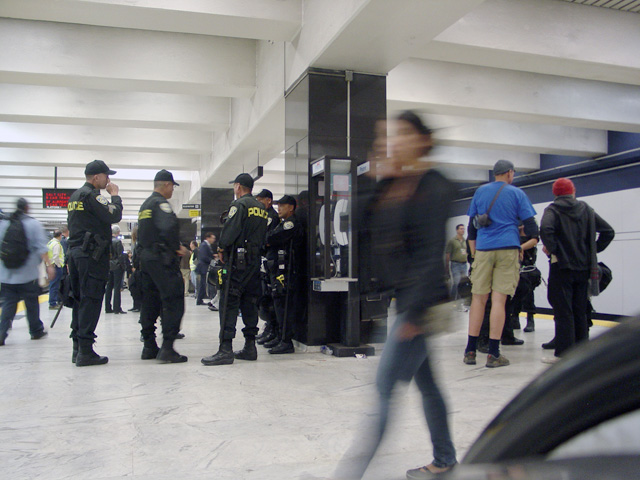 
At the Embarcadero station, Krystof of No Justice No BART tested BART's policy, as enunciated by BART spokesperson Linton Johnson, that "Inside the fare gates is a non-public forum and by law, by the Constitution, the U.S. Supreme Court, there is no right to free speech there." Krystof slid his BART ticket through a fair gate and stepped a few feet into the paid area, not blocking any passengers from making their way into or out of the station. He led a chant of "No justice, no peace, disband the BART police," and continued to speak out against BART's long history of police violence and recent history of arresting those who voice dissent within stations. Within a couple of minutes, a line of BART riot police moved in and blocked the fare gates between Krystof and the mass of demonstrators. Krystof returned to the un-paid area. A few minutes later, as he spoke amongst the crowd, a gang of riot police moved in to arrest Krystof. A second demonstrator was also arrested at the same time, even though he had never entered the paid area of the station.

Both arrestees were charged with Trespassing, the same thing demonstrators were charged with for speaking out on the Civic Center platform during #OpBART-2, except for the one felony "lynching" charge from #OpBART-2. (All charges by BART PD at #OpBART-2 were dropped at protesters' arraignments on August 29th.) The Trespassing charge is a purported violation of California Penal Code 369i (an infraction). Both arrestees were then sent to the SF County jail at 850 Bryant and released about two hours after having been arrested.

Both also received a visit while in jail from Carol A. Russo, a "Senior Conciliation Specialist" with the Community Relations Service of the U.S. Department of Justice. BART being ineffective in its attempts to stop protests against its police brutality, Russo offered to mediate between protesters and BART, including with BART's police chief Kenton Rainey. As to what exact concessions BART may or may not be willing to negotiate, if any, remains to be seen should activists ever decide to take Russo up on her offer.

After the arrests at Embarcadero, most demonstrators headed back to street level and continued to march on Market before dissipating of their own accord. 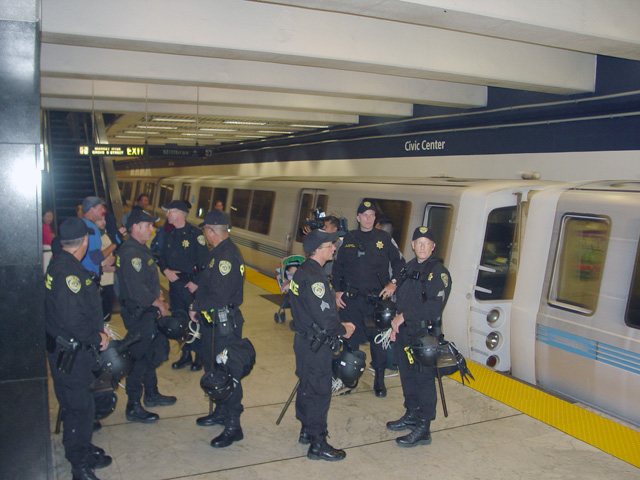 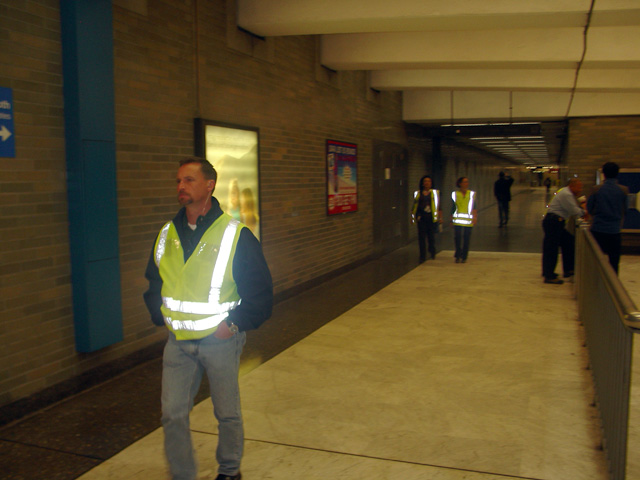 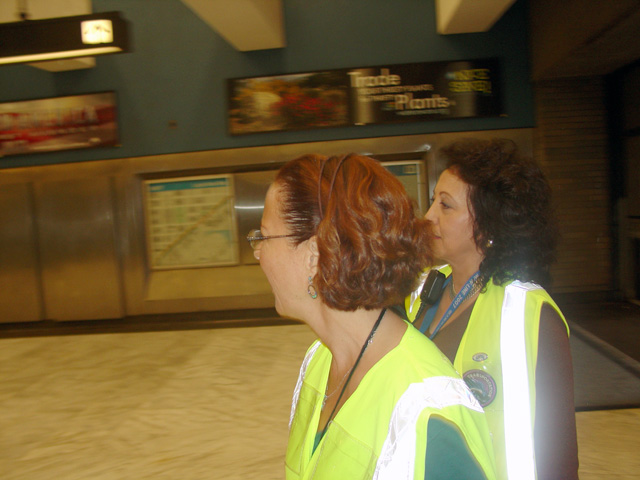 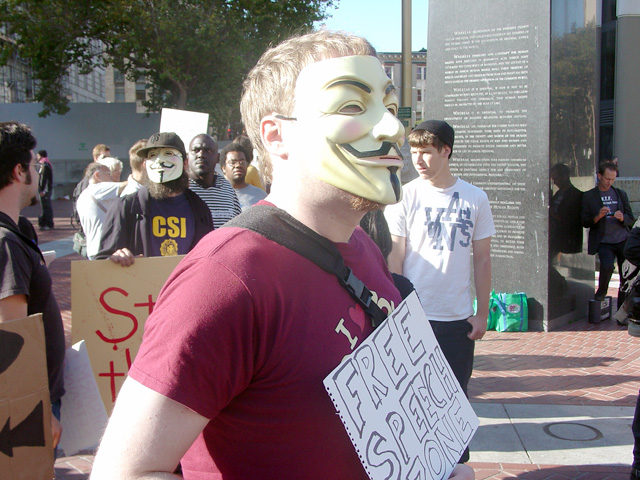 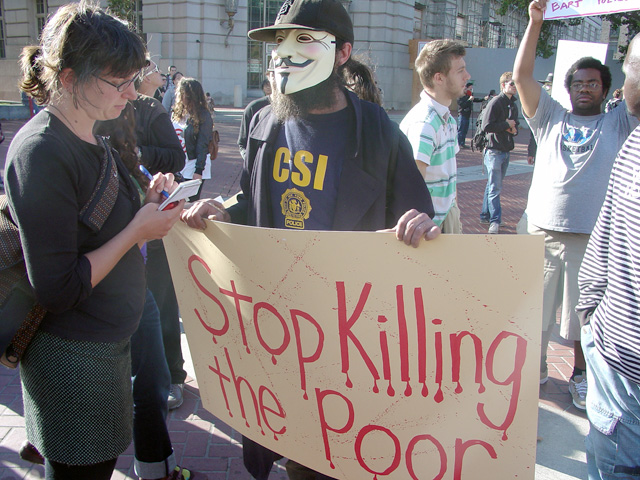 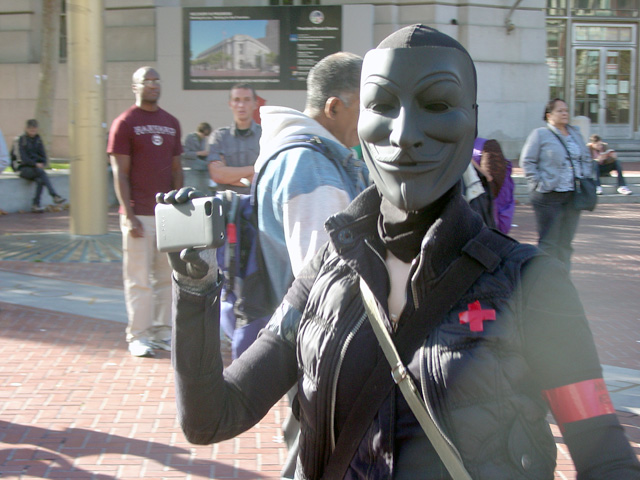 First as Tragedy, Then as Farce: OpBART Sliding Toward Silly Memes Over Effectual Activism
by Anon Medics
http://www.indybay.org/newsitems/2011/09/03/18689386.php 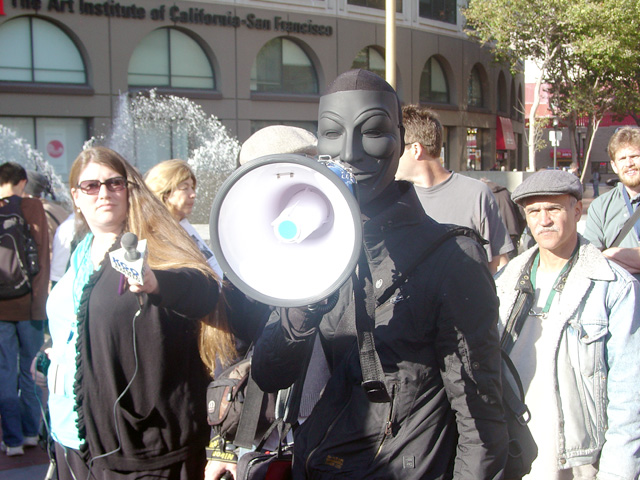 The crowd of protesters wasn't really hearing his pleas to protest "peacefully" and remain in the plaza. (While the messaging appears to have swung back to focusing on police brutality instead of primarily confronting BART's disabling of mobile phone antennas on August 11th, as per Anonymous communiques and social media, demonstrating "peacefully" seems to mean just standing still, holding signs, and wearing Guy Fawkes masks: http://www.indybay.org/newsitems/2011/08/25/18688754.php#18688988.) A group decision was made shortly thereafter to at least march on sidewalks. 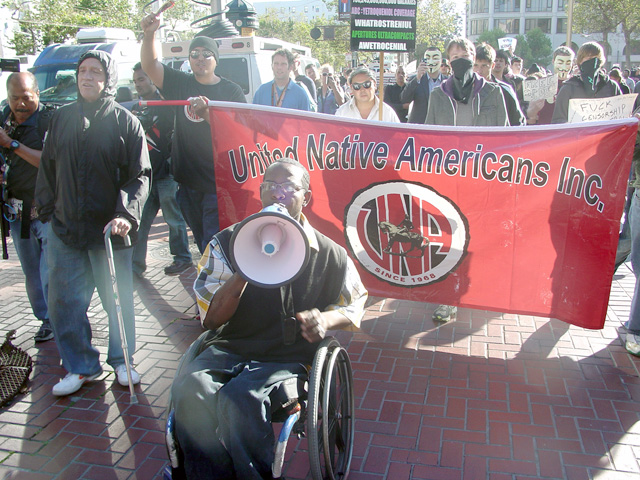 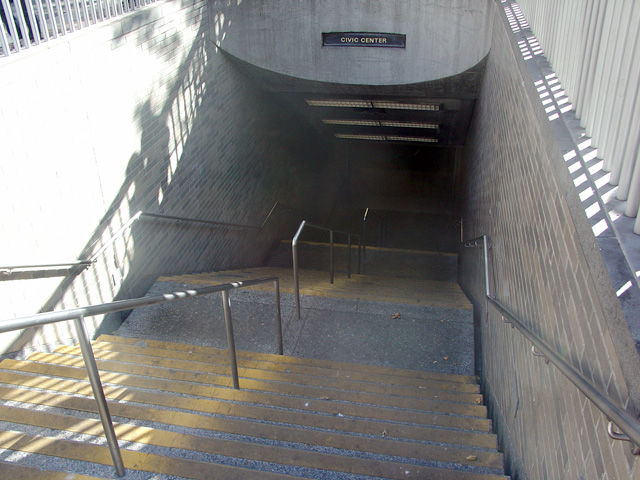 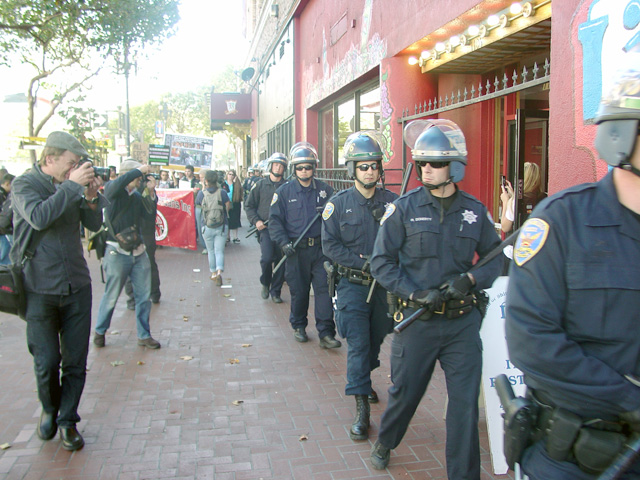 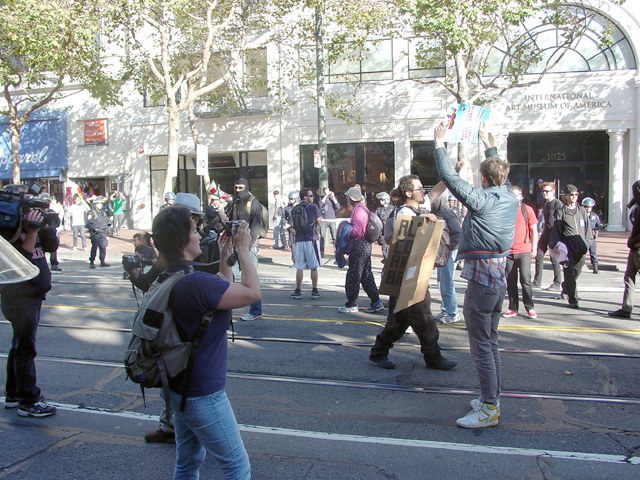 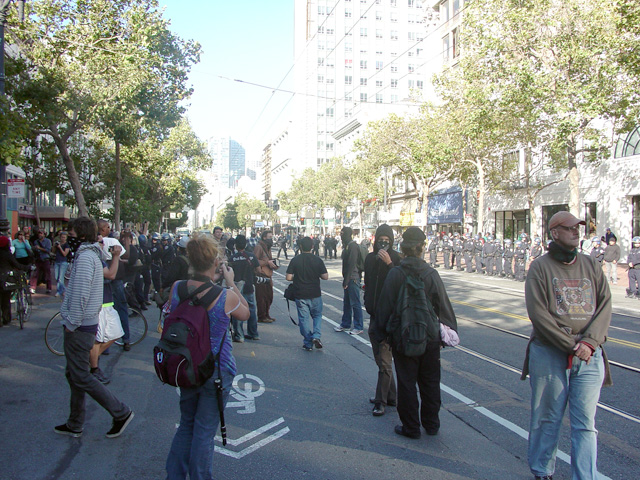 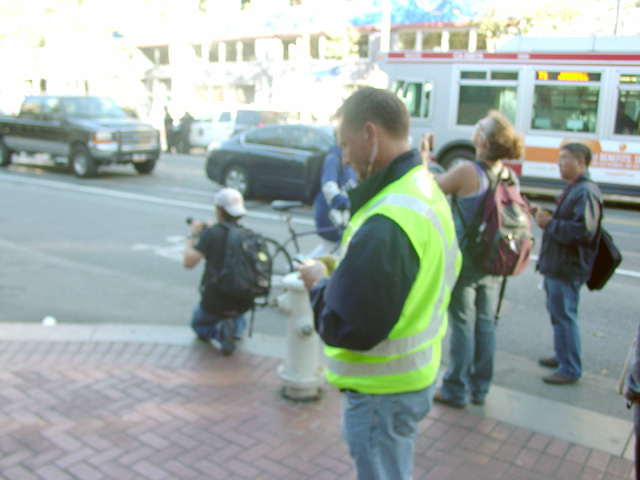 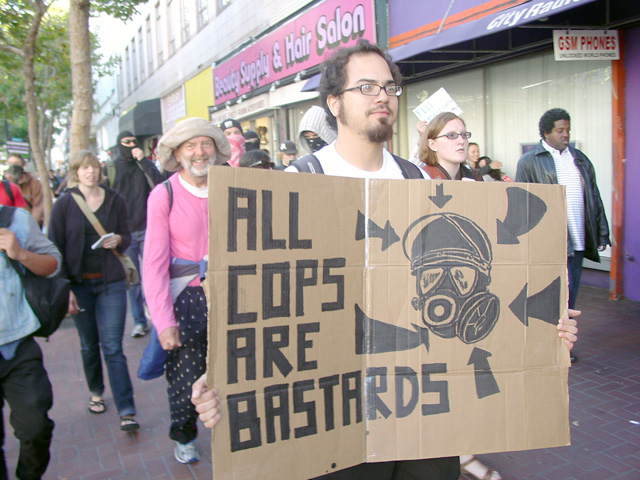 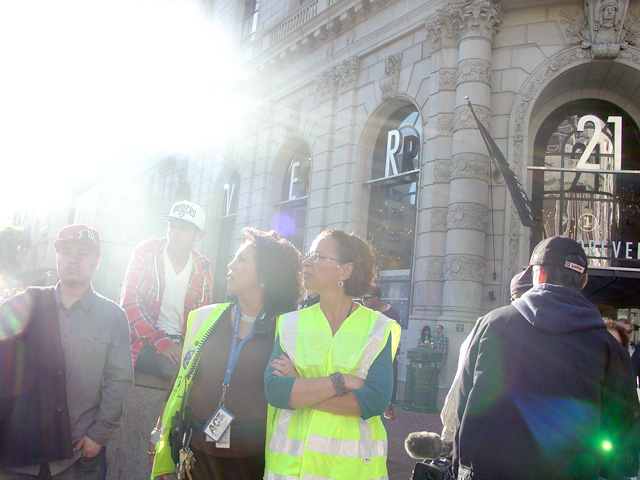