Add an Event
Newswire
Calendar
Features
Home
Donate
From the Open-Publishing Calendar
From the Open-Publishing Newswire
Indybay Feature
Publish to Newswire
Add an Event
Related Categories: East Bay | Police State & Prisons | Racial Justice
BART Anxious to Wrap Up Police Oversight Plan at Final Subcommittee Meeting, 8/10/09: audio & PDFs
by dave id
Friday Aug 14th, 2009 1:15 AM
The BART police oversight subcommittee held what was likely its last meeting on August 10th to consider the feedback it heard at the July 30th public forum and the comments it gathered via traditional and electronic mail through August 7th. It was obvious that it's members were anxious to close the door on the process and move a draft to the full BART Board for a vote. Despite repeated public feedback against allowing BART police to appoint a member to the so-called civilian review board and against restricting the review board (and BART's own Board) by requiring 2/3 supermajorities to overrule the police chief and the general manager on issues of police discipline, those problematic parts of the plan will remain.

Full audio of the meeting here and related PDFs below:
Listen now:
Copy the code below to embed this audio into a web page:
Download Audio (41.9MB) | Embed Audio
(audio 2:02:01)

Subcommittee member Reginald Lyles -- a former police officer who was often amongst those on the subcommittee pushing for stronger versions of civilian police oversight when the other three current and former police officers on the subcommittee were dissenting -- declared that there is little reason to worry about BART's two police unions appointing a member to the oversight board because police are very hard on each other. Without even looking at police forces beyond BART's, this made little sense in the current context, especially considering that not a single BART officer involved with the murder of Oscar Grant has been held to account in any way. In fact, Tony Pirone, Marysol Domenici, and the other officers on the Fruitvale platform on New Year's day are all still receiving paychecks as they enjoy extended vacations (i.e. "paid leave"). Chief Gary Gee declared that his officers all acted professionally and according to BART protocol even though he knew via hi-res video that BART police yelled racial epithets at Oscar Grant and his friends, pulled them to the ground by their hair, and pointed tasers in their faces, amongst other outrageous acts.

Interestingly, while BART reduced all of the feedback it heard on July 30th to a single page, they also printed and released page after page of the full written communications they received regarding their police oversight draft (PDF below). Much, if not most of it, was from BART police vehemently opposing citizen oversight of any kind. The police feedback was striking in several ways. One BART cop's email mocked East, West, and downtown Oakland, inadvertently revealing the nasty attitude BART officers carry with them in those areas. Of course, all three of the unarmed African American men BART police have murdered (Jerrold Hall, Bruce Edward Seward, and Oscar Grant) were killed in Oakland and Hayward. Another BART officer perhaps makes the best case for disbanding the BART police all together when she writes, "We have already witnessed the decline in morale. Do you really think that the current officers want to go out and do police work? No!" So, they hate Oakland, actually its citizens, and they resent their jobs. Not a good mix for passengers of color who happen to catch these officers at the wrong place and time. Overall, BART police seem quite happy with the lack of accountability demanded by Chief Gee and very hostile to the idea that citizens have a role to play overseeing their performance.

NOBLE (the National Organization of Black Law Enforcement Executives), hired by BART to review its police force "top to bottom" for a fee of $127,000, submitted proposed revisions to the draft that were basically ignored by the subcommittee. Notably, NOBLE was concerned with not having BART's two police unions appoint a member to the so-called citizens' board and had questions about the impartiality of a citizens' board appointed by the elected BART Board (PDF below).

Jesse Sekhon, President of the BART Police Officers' Association and a member of the police oversight subcommittee tasked with establishing civilian oversight (conflict of interest anyone?), was obviously agitated and upset in this final subcommittee meeting, perhaps feeling the inevitability of some form of police oversight being approved by BART. It is somewhat puzzling that Jesse Sekhon was consistently the most opposed to civilian oversight throughout the subcommittee meetings because Sekhon was the only BART officer who spoke publicly about Chief Gee's incompetence and Gee's inadequate response to the murder of Oscar Grant. "We're not executioners," he said at the time. "There was no protocol in place. It's a little bit embarrassing."

Oddly, as if his role in the subcommittee were not enough, Jesse Sekhon was one of the BART police officers who submitted feedback about the draft in an email. Sekhon's email offered a stark preview of battles to come over police oversight at BART. While he stated that he was writing as President of the BART Police Officers' Association (BPOA), he also spoke for the Peace Officers Research Association of California (PORAC). He threatened that if the BART Board did not "rewrite" the current draft with PORAC and BPOA, then PORAC "will have every law enforcement agency in the state actively oppose the bill" that the California legislature will have to pass in order to create the new police oversight function at BART. This is not surprising, given the adamant statewide police opposition shown to Assemblymember Tom Ammiano's AB312 in April. Tom Ammiano recently wrote that he thinks BART's draft represents "a watered-down shell of civilian oversight," so obviously civilian oversight at BART has a long way to go before a resolution is secured and the final result, if any, may look little like what BART has prepared now.

In the end, the BART police oversight subcommittee moved to forward the draft to the full BART Board for approval with relatively minor updates, the most notable being that no current sworn police officers can be members of the citizen board.

No Justice No BART Takes the Truth to the Trains
NJNB Informs Public About Officer Pirone's Racism and Chief Gee's Defense of BART Officers
http://www.indybay.org/newsitems/2009/07/21/18611968.php 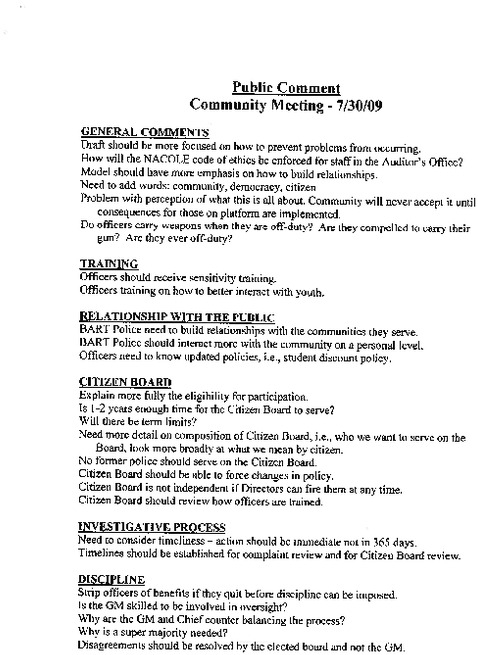 Read this and see if you don't think the BART police department should be disbanded entirely.

[Out of extreme courtesy, email addresses of most commenters have been removed even though BART handed them out to everyone at the August 10th meeting.]
http://indybay.org/oscargrant
§NOBLE's recommendations that were ignored by the subcommittee
by dave id Friday Aug 14th, 2009 1:15 AM 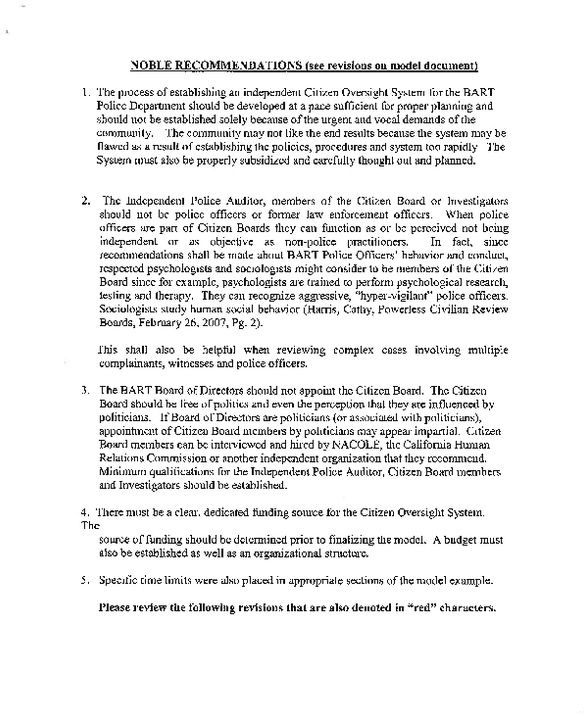 How does this flat-out rejection of their recommendations bode for NOBLE's review of the BART police force expected some time this Fall? 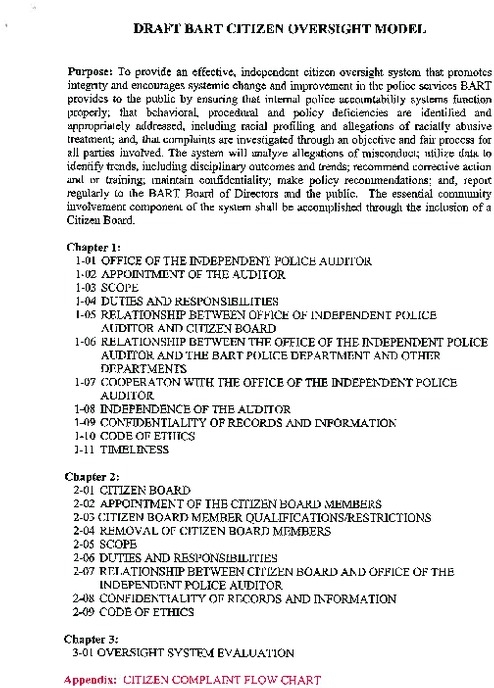