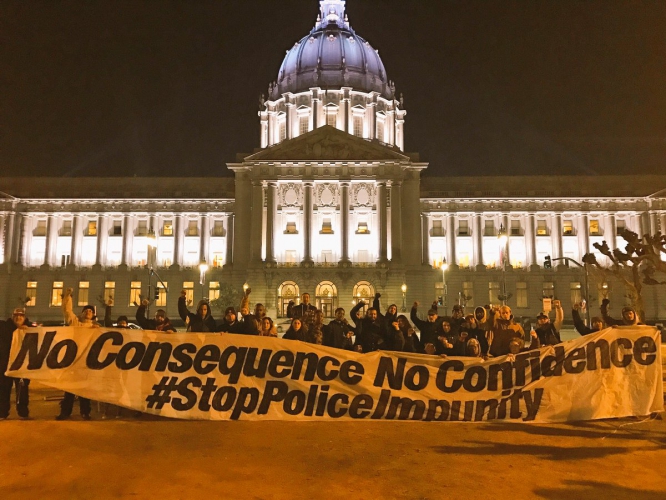 original image (1200x900)
San Francisco, CA, January 17, 2017 — To honor the call, made by the Anti Police Terror Project for 120 hours of direct actions to uphold the legacy of Martin Luther King Jr., local community organizers have planned to camp out in front of San Francisco’s City Hall until January 20th, 2017. They kicked off their camp out with a free community concert Tuesday night, that mobilized over 150 youth, parents, and community members.

Camp 120 is occupying space in front of City Hall to highlight the ineffectiveness and inaction of the DA Gascón and Mayor Ed Lee, regarding the heightened policing of Black and Brown residents by San Francisco Police Department. As an organized effort between students, families, organizers, and homeless people, we’re connecting our issues as working people in San Francisco.

On February 26, 2015 Amilcar was shot in the back 6 times by plainclothes police officers. We have been organizing and mobilizing non-violently for nearly two years, and have yet to see justice for his murder. Based on the autopsy report seeing six shots to the back of Amilcar's body, the lack of any evidence that Amilcar confronted the plainclothes officers, and many other details, Mayor Ed Lee and DA Gascon must hold their police officers accountable for the murder of Amilcar, as well as the other 10 pending cases against the SFPD. In light of national patterns of unwarranted police brutality, we expect SF officials to take heed of the people's demands or be held accountable for the incompetence of SFPD.

We’re bringing our issues directly to city hall - to the doorstep of this supposed democracy. We have played this system’s games - attended hearings across city-agencies, held community forums, led non-violent vigils and marches, and are NOT satisfied with the lack of response and action taken by the people who have been elected or appoint
https://twitter.com/search?q=%23camp120
Add Your Comments
Support Independent Media
We are 100% volunteer and depend on your participation to sustain our efforts!