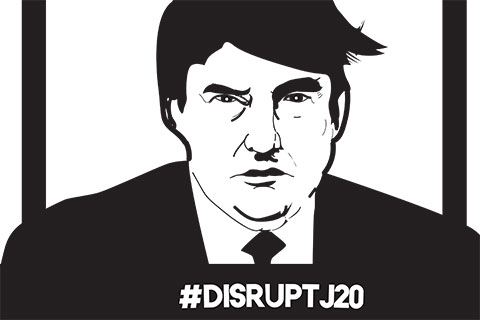 Mobilization Against the Coronation of Trump
#DisruptJ20: Nationwide and Bay Area Call-outs for General Strike Against Trump

A large coalition, including CrimethInc. Workers’ Collective, is calling for a bold mobilization against the inauguration of Donald Trump. In addition to Washington D.C., protests will also be held in Oakland, San Francisco, San José, Palo Alto, Santa Cruz, Monterey, and communities throughout the so-called United States.

A widely circulated call to action states, "On Friday, January 20, 2017, Donald Trump will be inaugurated as President of the United States. We call on all people of good conscience to join in disrupting the ceremonies." The call to action continues, "Trump stands for tyranny, greed, and misogyny. He is the champion of neo-nazis and white Nationalists, of the police who kill the Black, Brown and poor on a daily basis, of racist border agents and sadistic prison guards, of the FBI and NSA who tap your phone and read your email. He is the harbinger of even more climate catastrophe, deportation, discrimination, and endless war."

ILWU10 Members Speak Out On Trump, Capitalism, The Need For Workers Party And Take Action

A Protest Action of Conscience and Resistance: No Wall! No Mass Deportations! No “Muslim Registry"!, 8am |

Tech Workers for Racial Justice, 10am |

Requiem for a Dream: A Resurrection of Hope, 5pm |

Rise Up for Justice Inauguration Day, 11am |

J20 Inauguration Day WALK OUT at UCSC, 9am

Vigil for Peace and Justice, 8am |

Not My President - Fresno Event, 6pm

On The Propriety Of Punching Nazis, An FAQ |

Against Trump or Against Capitalism? | Democracy Now Live Broadcasts Jan 20-21 Inauguration & Women's March on DC | Redefining The National Strike | Should someone 5150 Trump for being a threat to himself and everyone else?

Related Features: Millions of Women Take a Stand Against Trump the Day After Inauguration | Reclaiming King's Legacy in the Age of Trump | We've Got a Bigger Problem Now