#DisruptJ20: Call for a bold mobilization against the inauguration of Donald Trump on January 20, 2017

On Friday, January 20, 2017, Donald Trump will be inaugurated as President of the United States. We call on all people of good conscience to join in disrupting the ceremonies. If Trump is to be inaugurated at all, let it happen behind closed doors, showing the true face of the security state Trump will preside over. It must be made clear to the whole world that the vast majority of people in the United States do not support his presidency or consent to his rule.

Trump stands for tyranny, greed, and misogyny. He is the champion of neo-nazis and white Nationalists, of the police who kill the Black, Brown and poor on a daily basis, of racist border agents and sadistic prison guards, of the FBI and NSA who tap your phone and read your email. He is the harbinger of even more climate catastrophe, deportation, discrimination, and endless war. He continues to deny the existence of climate change, in spite of all the evidence, putting the future of the whole human race at stake. The KKK, Vladimir Putin, Golden Dawn, and the Islamic State all cheered his victory. If we let his inauguration go unchallenged, we are opening the door to the future they envision.

Trump’s success confirms the bankruptcy of representative democracy. Rather than using the democratic process as an alibi for inaction, we must show that no election could legitimize his agenda. Neither the Democrats nor any other political party or politician will save us—they just offer a weaker version of the same thing. If there is going to be positive change in this society, we have to make it ourselves, together, through direct action.

From day one, the Trump presidency will be a disaster. #DisruptJ20 will be the start of the resistance. We must take to the streets and protest, blockade, disrupt, intervene, sit in, walk out, rise up, and make more noise and good trouble than the establishment can bear. The parade must be stopped. We must delegitimize Trump and all he represents. It’s time to defend ourselves, our loved ones, and the world that sustains us as if our lives depend on it—because they do.

DC will not be hospitable to the Trump administration. Every corporation must openly declare whether they side with him or with the people who will suffer at his hands. Thousands will converge and demonstrate resistance to the Trump regime. Save the date. A website will appear shortly with more details. #DisruptJ20

If you can’t make it to Washington, DC on January 20, take to the streets wherever you are. We call on our comrades to organize demonstrations and other actions for the night of January 20. There is also a call for a general strike to take place. Organize a walkout at your school now. Workers: call out sick and take the day off. No work, no school, no shopping, no housework. #DisruptJ20

If you are living outside the US, you can take action at US embassies, borders, or other symbols of neocolonial power. Our allegiance is not to “making America great again,” but to all of humanity and the planet. #DisruptJ20

If you endorse this call, sign your name at the bottom of this list and circulate it. Email disruptj20@riseup.net to be included in the above list. 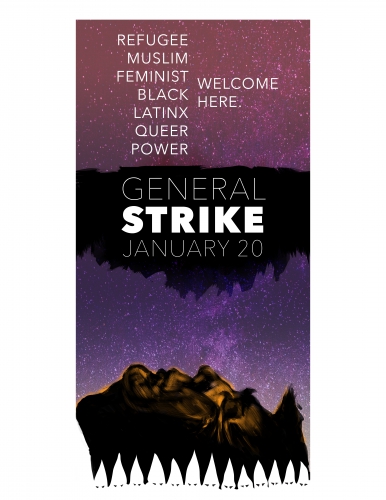 original image (3400x4400)
Everywhere. Federal buildings.
Add Your Comments
LATEST COMMENTS ABOUT THIS ARTICLE
Listed below are the latest comments about this post.
These comments are submitted anonymously by website visitors.