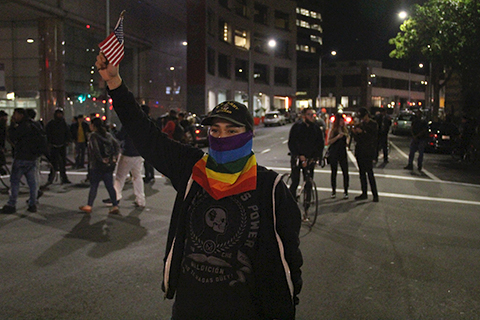 We've Got a Bigger Problem Now
With Election of Trump as Next US President, Cities Across the Country Rise Up in Protest

By the evening of November 9, protesters poured into the streets across the country. Even as they rallied and marched in defiance of a Trump presidency, demonstrators were still processing the reality that the next president of the United States will be a narcissistic demagogue who bragged he sexually assaulted women, called for the deportation of millions of immigrants, and proposed banning Muslims from entering the country. Trump's campaign was built on white supremacist and nativist tropes, and he won the election by dominating the white vote, primarily white men. People are pissed — and people of color especially are worried about what is to come.

In many cities, demonstrations continue on a daily or near-daily basis. There is no end in sight as Trump assembles his administration Calls have gone out to disrupt inaugural events on January 20 and for a Women's March on Washington on January 21.

Publish your Trump protest photos and video to Indybay!

Fuck Trump: Oakland Police Lose Control of the Streets on Day One |

Davey D Street Interviews at Oakland Anti-Trump Protest After Election | Oakland School for the Arts: No Trump, No KKK, No Fascist USA |

Berkeley: Thousands protest in Berkeley in wake of Trump election |

Fuck Trump March and Sit in at 555 California |

Emergency Protest: Trump Says Get Back, We Say Fight Back!

March Against Trump Oppose Xenophobia and Racism in Santa Cruz |

Massive Protest at UC Santa Cruz as Trump is Elected

No to Grabbing/You are Not My President

Fresno: March and Rally Against Trump |

#DisruptJ20: Call for a bold mobilization against the inauguration of Donald Trump |

Fuck Trump, But Fuck You Too: No Unity With Liberals |

Trump: What How What |

The Electoral College Giveth, And The Electoral College Can Taketh Away | U.S. Electile Dysfunction--A Tyranny of the Minority | Exit polls suggest that Trump’s big “victory” was stolen (just like Hillary’s nomination) | A Trump administration will probably be hostile to affordable housing programs | New Site to Make Donations to Great Orgs for People Raging About Trump | Trump appoints enemies of salmon, Delta and environment to transition team |

#DisruptJ20: trump supporter voicemail to Indybay | ACLU of Northern California Condemns Anti-Muslim Attack in San Jose | Many of us woke up confused, scared, shocked and traumatized

Related Features: History Teacher Suspended for Comparing Rise of Trump and Hitler | Long National Nightmare of the 2016 Election Is Almost Over | Trump Forced to Sneak Through Fence to Reach California GOP Convention in Burlingame