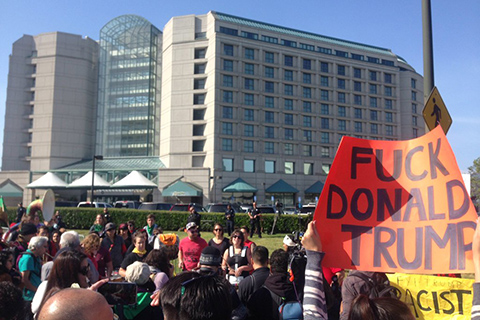 Protests against Donald Trump are heating up in California as the June 7 presidential primary approaches. Before a city council meeting in Anaheim, Trump supporters and anti-Trump protesters used tasers and pepper spray on each other. Outside of a Trump rally in Costa Mesa, traffic was blocked, police cars vandalized, and 17 people were arrested.

On April 29, it was the Bay Area's turn. Trump was scheduled to speak on the opening day of the California Republican Convention in Burlingame, just south of San Francisco. Protesters came out in force, blocked streets with lockboxes, and pushed through police barricades to rush the Hyatt hotel at which the convention was being held. Trump's motorcade was unable to drive directly to the hotel, so Trump and his entourage were forced to walk from Highway 101 through concrete barriers to reach the convention via a back entrance.

Turn Up on Trump in San Francisco