Add an Event
Newswire
Calendar
Features
Home
Donate
From the Open-Publishing Calendar
From the Open-Publishing Newswire
Indybay Feature
Publish to Newswire
Add an Event
Related Categories: California | Central Valley | U.S. | Environment & Forest Defense | Government & Elections | Racial Justice
Trump appoints enemies of salmon, Delta and environment to transition team
by Dan Bacher
Sunday Nov 13th, 2016 10:24 AM
Many of those opposed to the construction of the Delta Tunnels fear that Governor Brown may try to make a deal with the Trump administration to back the construction of the California Water Fix, his "legacy project. On Thursday, Brown issued a statement saying his administration would do its part “to find common ground whenever possible” while “protecting the precious rights of our people” and confronting “devastating climate change. 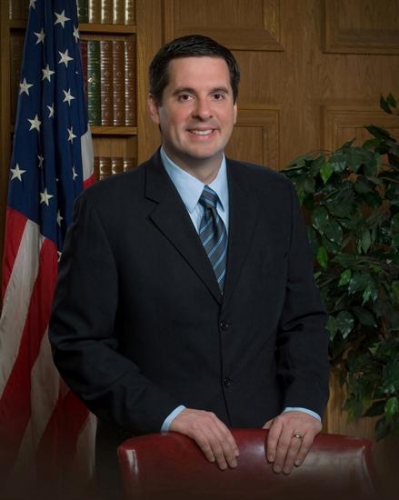 original image (439x550)
If anybody had the tiniest illusion that incoming President Donald Trump would appoint somebody who cares about the Delta, Klamath River, fish and wildlife and the environment to his transition team, it was quickly dispelled with the appointment of two anti-environmental extremists to his team after he was elected.

On Friday, Representative Devin Nunes (CA-22), one of the most aggressive Congressional proponents of increasing Delta water exports to agribusiness and one of the fiercest opponents of fish and wildlife restoration in California and the West, joined the 16-member executive committee of Donald Trump’s transition team.

“Today I was honored to have been named to the executive committee of President-elect Donald Trump's transition team,” said Nunes in a statement. “In this role, I will advise President-elect Trump on the appointments of his Cabinet members and on appointments to other top positions in the new administration. I look forward to helping to assemble an energetic and forward-looking team that will capably lead our country toward more economic growth, greater opportunity, and a safer homeland for all Americans.”

Nunes chairs the House Intelligence Committee and disagrees with Trump on issues including so-called “free trade" deals. Nunes is a backer of the controversial Trans-Pacific Partnership trade deal that Trump claims he will stop.

However, Nunes told McClatchy News this week that he believes Trump supports corporate agribusiness interests on the west side of the San Joaquin Valley in their push to export more Delta water. Nunes has been one of the greatest advocates for the weakening of the Endangered Species Act, Clean Water Act and other landmark environmental laws.

“The good thing is, he is more up to speed on water infrastructure than any other president we’ve had,” Nunes said. “Out here, everything is water, water, water.” (http://www.sacbee.com/news/politics-government/election/article114190123.html)

It gets worse. Politico reported Wednesday that David Bernhardt, a lawyer who co-chaired the natural resources department at the firm Brownstein Hyatt Farber Schreck and served as a George W. Bush Interior Department official, is leading the transition's Interior Department team.

According to Congressional disclosures, his current lobbying clients include the Westlands Water District, considered the Darth Vader of California politics by Tribes, fishermen and environmentalists, and one of the biggest proponents of exporting more Delta water. Bernhart represented the Westlands Water District on litigation involving the Delta and the Endangered Species Act. (http://www.politico.com/story/2016/09/trump-energy-team-mike-mckenna-myron-ebell-228672)

Other members of Trump’s transition team include Silicon Valley billionaire Peter Thiel, the co-founder of PayPal and a board member of Facebook; Trump's sons and daughter Ivanka; and Trump campaign CEO Steve Bannon, a white nationalist and the former executive chairman of Breitbart News LLC, who has worked as an investment banker with Goldman-Sachs, filmmaker and political consultant.

Trump hasn't taken a specific position on the Governor Jerry Brown's "legacy" project, the Delta Tunnels, but his comments to date on California water have shown a strong embrace of the campaign by corporate agribusiness interests to pump more water from the Delta at the expense of Delta smelt and salmon populations.

At a rally at the Selland Arena in Fresno, on May 27, 2016, Trump appeared to agree with the claims of some growers that there is no drought in California.

“When I just left, 50 or 60 farmers in the back and they can’t get water. And I say, ‘How tough is it; how bad is the drought?’ 'There is no drought, they turn the water out into the ocean.’ And I said I’ve been hearing it and I spent a half an hour with them it’s hard to believe.” (http://www.slate.com/blogs/bad_astronomy/2016/05/30/donald_trump_claims_there_is_no_drought_in_california.html)

He also claimed that the subsidized water that growers should have received was washed out to sea in an effort to protect “a certain kind of 3-inch fish," referring to the Delta smelt, an endangered indicator species that demonstrates the health of the San Francisco Bay-Delta Estuary.

“Believe me, we’re going to start opening up the water so that you can have your farmers survive,” said Trump.

Alex Breitler, Stockton Record reporter, pointed out, “’Opening up the water’ implies increasing the volume of water exported south from the Delta, exports that are blamed in part for the long-term decline of the fragile river estuary west of Stockton. The Delta ecosystem suffers from a kind of perpetual drought because more than half of its fresh water historically has been diverted for human use.” (http://www.recordnet.com/news/20161109/what-president-trump-might-mean-for-delta)

Many of those opposed to the construction of the Delta Tunnels fear that Governor Brown may try to make a deal with the Trump administration to back the construction of the California Water Fix, his "legacy project. On Thursday, Brown issued a statement saying his administration would do its part “to find common ground whenever possible” while “protecting the precious rights of our people” and confronting “devastating climate change.

Brown stated, “Today we saw the beginning of the transfer of power to the President-elect.

While the prerogatives of victory are clear, so also are the responsibilities to ensure a strong and unified America. As President Lincoln said, ‘A house divided against itself cannot stand.’ With the deep divisions in our country, it is incumbent on all of us – especially the new leadership in Washington – to take steps that heal those divisions, not deepen them. In California, we will do our part to find common ground whenever possible.

But as Californians, we will also stay true to our basic principles. We will protect the precious rights of our people and continue to confront the existential threat of our time – devastating climate change.

While I strongly support the Governor's call to protect people’s rights and to confront climate change, I fear that the “common ground” that the Brown administration will find with the Trump administration will be on tunnels, new dams and fracking. We must stop Brown from working with Trump to weaken landmark laws like the Endangered Species Act and Clean Water Act in order to fast-track the completion of the California Water Fix before he leaves office.

The two 35-mile long tunnels under the Delta would make the Delta, San Francisco Bay and our ocean waters into a giant aquatic graveyard. We must drive a stake into the heart of this project and stop it from pushing Delta and longfin smelt, Central Valley steelhead, Sacramento River winter-run Chinook salmon, green sturgeon and other fish and wildlife species into extinction — and prevent Brown and his administration from making any deals with the Trump that will push forward the tunnels, as well as new dams and fracking.

Caleen Sisk, chief and spiritual leader of the Winnemem Wintu Tribe, affirmed the Tribe’s plan to resist any plans by the Trump or Brown administrations to sacrifice salmon, the environment and human rights at the altar of corporate greed.

“Now we share the definition of ‘Endangered’ with all the other species,” said Chief Sisk after the election. “The Winnemem Wintu have been there since California Statehood....surviving is a challenge when you are losing your waters and food supply. You must never quit the fight to survive with the salmon!”

While Brown poses as a “climate leader” and “environmentalist” at climate conferences, he is heavily backed by agribusiness billionaires and the oil companies — the same corporate interests that have funded Brown’s reelection and proposition campaigns, including Proposition 1 in 2014. These are the same corporate interests that Trump and his transition team represent.

Trump's transition team just released their “energy” plan. Their statement is absolutely chilling for anybody who cares about fish and wildlife, people, water, the environment and the public trust:

‘Rather than continuing the current path to undermine and block America's fossil fuel producers, the Trump Administration will encourage the production of these resources by opening onshore and offshore leasing on federal lands and waters. We will streamline the permitting process for all energy projects, including the billions of dollars in projects held up by President Obama, and rescind the job-destroying executive actions under his Administration. We will end the war on coal, and rescind the coal mining lease moratorium, the excessive Interior Department stream rule, and conduct a top-down review of all anti-coal regulations issued by the Obama Administration. We will eliminate the highly invasive "Waters of the US" rule, and scrap the $5 trillion dollar Obama-Clinton Climate Action Plan and the Clean Power Plan and prevent these unilateral plans from increasing monthly electric bills by double-digits without any measurable effect on Earth's climate.’
Add Your Comments
Support Independent Media
We are 100% volunteer and depend on your participation to sustain our efforts!