Add an Event
Newswire
Calendar
Features
Home
Donate
From the Open-Publishing Calendar
From the Open-Publishing Newswire
Indybay Feature
Publish to Newswire
Add an Event
Related Categories: Santa Cruz Indymedia | Education & Student Activism | Government & Elections | Immigrant Rights | Labor & Workers | Racial Justice
Santa Cruz Residents Begin Organizing for a General Strike on Inauguration Day
by Santa Cruz General Strike Organizing Committe
Saturday Nov 19th, 2016 5:36 PM
Community members in Santa Cruz have called for a general strike on January 20, 2017, Inauguration Day, and have begun organizing events leading up to the date. On November 21, there will be a general strike planning meeting held at UC Santa Cruz, and on November 22 there will be a march to the Santa Cruz City Council to demand council members commit to a real sanctuary city status for the Santa Cruz. Organizers of the general strike are asking community members not to work or attend school on January 20. 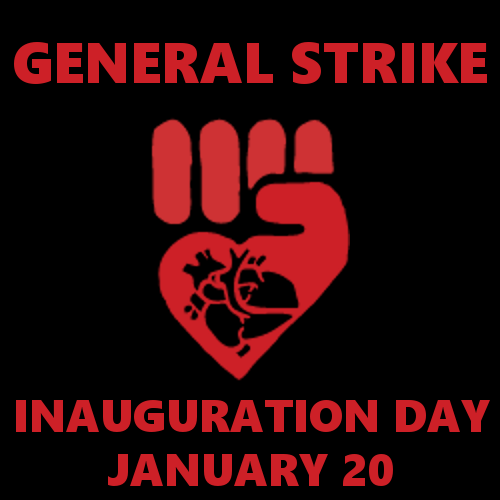 1 - That California Become A Sanctuary State: No cooperation with immigration marshals, No sharing the names of our community members. In Santa Cruz, UCSC, Cabrillo, and the City must affirm genuine sanctuary status.

2 - Free Higher Education Across California. We will build a healthy society in spite of the state.


This is a call to solidarity, to caring, defense, organizing, and action.

Workers and students join together. Walk out of schools, step off the job and out of our homes, gather and march. This is the beginning. It is time for new tools and visions of care as we say no to racist vigilante violence, no to bigotry, no to Trump, no to the capitalist system that birthed him.

The election of Trump is a referendum on the failure of the democratic party, the two-party system and the basic structures of our representative democracy. But just as urgent, Trump is endorsed by the KKK, and for clear reasons. Do we want our children to remember us as the next wave of accommodation to white supremacy?

We strike against the Trump administration and declare four years of noncompliance.

General Strikes were once the most powerful tool of working people. Here, the whole community shows its love and care – we make the streets our commons. It's time to revive the tradition. Refusing our labor is an act of solidarity with those among us threatened by Trump’s vigilantes; an act of courage that directly attacks the system that nurtured Trump’s rise to fame and power; and an important way to bring lots of us together to build community strength. A strike means we refuse to work and instead come together to protest, sing, eat, and organize.

Organize to shut down the city of Santa Cruz. Organize in the schools, unions, community centers, houses of worship, among parents, workers, the un-homed, environmentalists, immigrants, queers, people of color, neighborhood groups. Organize old folks, youth, children, everyone!! Bring your bodies, your art, your hope and rage, your friends and families, and your inspiration – help us make Jan 20th the start of a new way to be together.

We must strike! We don’t want a different president, We Want Everything! 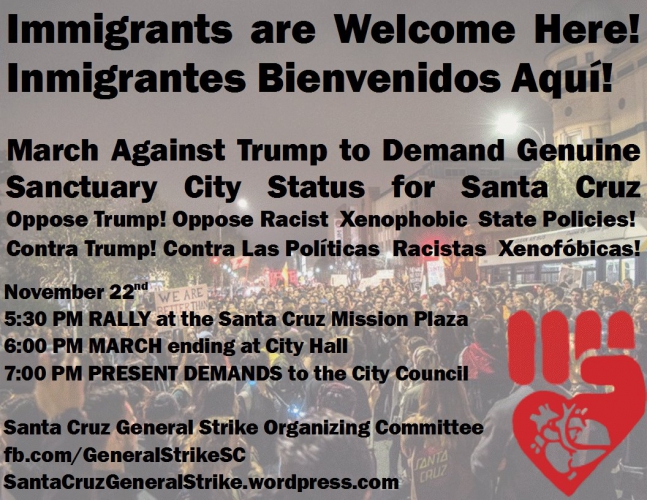 original image (1056x816)
Add Your Comments
LATEST COMMENTS ABOUT THIS ARTICLE
Listed below are the latest comments about this post.
These comments are submitted anonymously by website visitors.