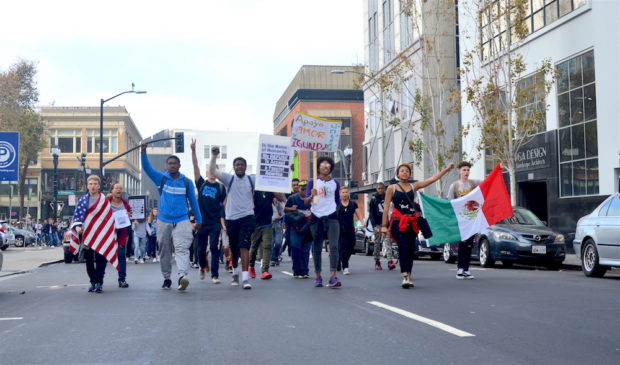 
Students from about 10 different high schools gathered in front of City Hall at 11 a.m. and gave short speeches to the crowd of hundreds about what they were protesting.

“We’re not here just protesting against Donald Trump the person. We stand against the ideologies of Trump,” said one student at the rally.

“We’re protesting against a man who wants this country divided by race, gender, class and everything. We have to let him know that we will not put up with it.”

The students then marched from City Hall onto the streets and made their way to the Grand Lake pillars at Eastshore Park, walking down Grand Ave.

The line of students stretched back for blocks as they chanted and held signs reading, “No human is illegal,” “My body, my choice” and “Not my president.”

Monday’s march follows days of protests against Trump’s election in the Bay Area, which last week saw massive student walk outs, nighttime demonstrations in Oakland and San Francisco, and a gathering of thousands of protestors who linked hands around the entirety of Lake Merritt on Sunday.

Once at Eastshore Park in front of the pillars, the students on Monday rallied once more and talked about the unity that will be necessary to counteract the feared consequences of a Trump presidency.

“Today we are not students from Oakland Tech or Oakland High but people of Oakland who need to stand together against racism, misogyny and xenophobia in every level of government,” a student announced at the rally.

“If we stay divided, Donald Trump will win,” he said. 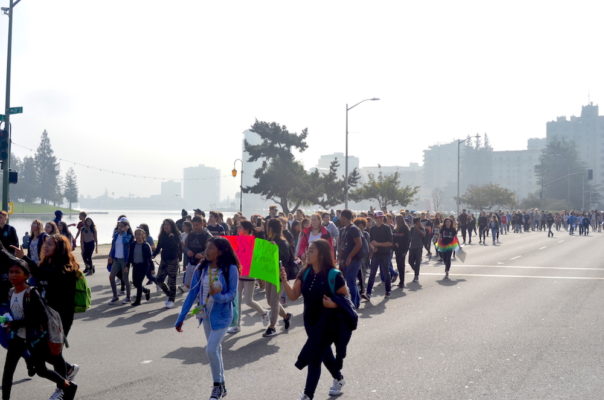