Add an Event
Newswire
Calendar
Features
Home
Donate
From the Open-Publishing Calendar
From the Open-Publishing Newswire
Indybay Feature
Publish to Newswire
Add an Event
Related Categories: U.S. | Government & Elections
Secession
by anon
Monday Nov 14th, 2016 3:07 PM
Secession is the departure of a group or community from a larger organization such as a state, province, country, or empire. Talk of secession has increased since Trump won the presidential election. Secession is the correct response to the election of Trump. States, regions, counties, towns, and cities should secede from the United States. Cities and states where most people did not vote for Trump must secede from the US. The United States is not worth saving. 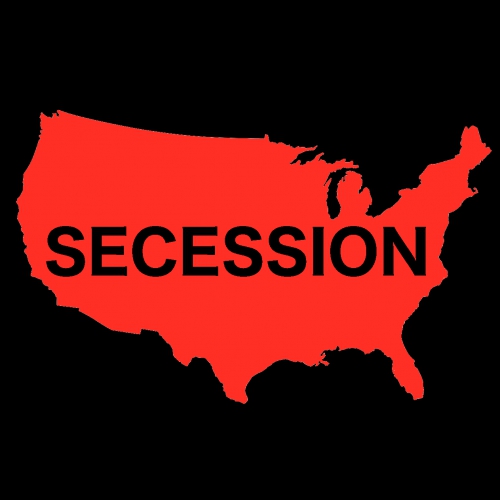 original image (1263x1263)
President Trump will bring oppressive, right-wing policies to places where most people did not vote for him. There are irreconcilable differences between people who voted for Trump and people who did not vote for Trump. Separation of the opposing sides is the best way to deal with irreconcilable differences. Secession would make separation formal and long-lasting. Places that are seceding from the US should seek international recognition as independent countries and should be shown on maps of the world as independent countries, not as part of the US. Places that are seceding should ask for help from people, countries, and organizations outside the US.

Nobody should listen to people who tell us to work with Trump, to stop protesting him, or to accept him as president. Secession is an effective way for oppressed groups such as minorities and the poor to defend themselves from the federal government, hate crimes, exploitation, and police brutality. It is time for progressives, radicals, anarchists, leftists, environmentalists, feminists, vegans, and socialists to join forces, set aside their differences, and push for secession. California, Illinois, New York, and other blue states should secede from the United States. In Miami most voters chose Clinton. If Florida won't secede then Miami can secede from the US by separating from Florida and joining an alliance of states and cities that have left the US. Indigenous tribes whose territory is in the US may want to secede at this time and we should help them. Places that have seceded should be autonomous communities that can decide how they want to live. Autonomous communities may need to form a military alliance so they can defend themselves from people who oppose secession. Places that have seceded should take in refugees and other people who are trying to leave places that are under control of the federal government.

We must secede now because the federal government will never give us the reforms we need and here’s why: Obama’s reforms were blocked by Republicans, Sanders and Clinton lost the 2016 election, the US will be divided between progressive Democrats and conservative Republicans for another 50 years if not longer. There will be no progressive reforms coming from the federal government because Washington, DC will be controlled by Republicans or will be deadlocked between Democrats and Republicans for a very long time.

This is not a time for intellectualism or the writing of books. This is a time for physical action in the streets. There is a proposal in California to put secession on the ballot in 2019 but 2019 might be too late for secession. Secession needs to happen before 2019. The reason we should secede now is that waiting gives the Trump regime time to consolidate its power. Oppressive regimes such as Trump’s government need to be confronted when they first appear because the more time a regime has to consolidate its power: the stronger the regime will get, the longer the regime will last, and the harder it will be to bring down the regime in the future.

The break up of the Soviet Union was made possible by mass protests in Moscow in 1991. Beginning on January 20, 2017, the Inauguration, millions of people should come to Washington, DC and demand secession, the break up of the US. Mass protests all over the country will make secession happen sooner. Protests in Washington, DC should keep happening until the secession process is complete. Large protests in Washington, DC that go on for months or years will have a demoralizing effect on politicians in the federal government and cause them to eventually accept secession. Protesters should demand that places that secede get their share of the federal government’s money and military weapons.

Know your rights. The First Amendment, which gives us free speech and freedom of association and assembly, makes it legal for people in the US to talk about secession, to join secessionist organizations, and to participate in meetings, protests, and movements for secession. To secede we don’t need Trump’s permission or the federal government’s permission. Few countries have gained their independence legally. Most of the countries in the world today became independent illegally after a unilateral declaration of independence without the permission of the country or empire they seceded from. History is full of times when a territory became independent by separating from a country or empire. Secession is a normal human behavior that has been happening in all parts of the world for thousands of years. Secession is a human right that we all have whether or not a government says it is legal. To secede is not a crime, it is self defense.

Here are the Saint Paul Principles that were written in 2008 by organizers of the protests against the RNC:
1. Our solidarity will be based on respect for a diversity of tactics and the plans of other groups.
2. The actions and tactics used will be organized to maintain a separation of time or space.
3. Any debates or criticisms will stay internal to the movement, avoiding any public or media denunciations of fellow activists and events.
4. We oppose any state repression of dissent, including surveillance, infiltration, disruption, and violence. We agree not to assist law enforcement actions against activists and others.

Anonymously written in November 2016. This writing can be copied, posted, translated, and distributed without permission from the author. Post this all over the internet. If this doesn’t get approved for posting on a certain website then post it as a comment to an article about Trump, post it on social media, or email it to people.
Add Your Comments
LATEST COMMENTS ABOUT THIS ARTICLE
Listed below are the latest comments about this post.
These comments are submitted anonymously by website visitors.