Newswire
Calendar
Features
Home
Donate
From the Open-Publishing Calendar
From the Open-Publishing Newswire
Indybay Feature
Publish to Newswire
Add an Event
Related Categories: California | U.S. | Government & Elections | Police State & Prisons | Racial Justice
Fuck Trump, But Fuck You Too: No Unity With Liberals
by Bobby London
Friday Nov 18th, 2016 11:36 AM
These same oppressed groups have been ignored by those same white liberals that are now consumed and overwhelmed with a need to take action. After they have spent years ignoring us when we have screamed and stated openly that America is a racist, white supremacist, fascist country, created through the genocide and physical erasure of indigenous people, and built on the backs of Africans that were kidnapped and brought over here and forced into slavery. 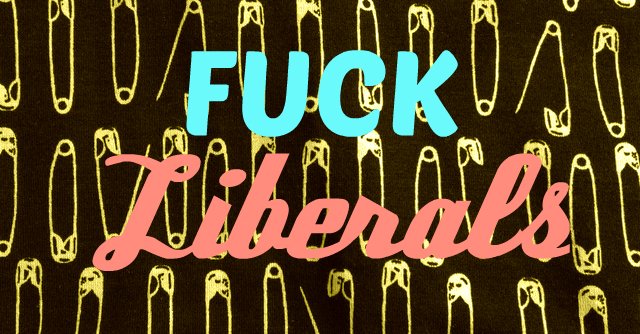 A cop begins swinging his baton at the protesters in front of me. A riot line begins to form and push against the crowd as they chanted “this is a peaceful movement”. I began chanting "fuck the police" cause that's what you do when cops start being ... well cops. "Shhhh", a man I did not know said to me while he put his hand in front my lips almost close enough to touch them. I told him to get his hand out of my face, and was met with several other men pushing their bodies up against me, forming hearts with their hands while yelling at me "this is a peaceful movement". As that is happening, a white woman hits me in the head, knocking my hat off onto the ground. Where were my safety pin allies when I needed you then?

The cop who was swinging his baton watched as the crowd turned their anger on me instead, he smiled. Probably laughing on the inside while the people he so badly wanted to hit made sure no one said, “fuck the police”. Funny enough, earlier the predominantly white crowd was very eager to chant “black lives, they matter here”, just like they saw before on their computer screens when black people took to the streets to protest the violence wielded by the police.

What was made clear that night was that blue lives mattered more than this black one.

This is the anti-Trump movement, at least in Los Angeles. A bunch of white liberals with a fringe radical element who they continuously silenced, policed, threatened, and attacked for pushing past the "not my president" narrative.

While it is great that people are taking the streets, and that protests have remained consistent since the election, it will be all in vain unless systemic issues are brought up and addressed within the movement.

As it stands, for radicals, specifically non-white anti-authoritarians, these actions hold the same element of danger as attending a Trump rally. For a white liberal may not shoot you, they'll just snitch on you to the cops who will. They’ll also wear a safety pin to show how much of an “ally” they are, while shaking the hands of police officers at an action, cause "LAPD are good cops", “better” than those other ones.

So while some may try to argue that there is room for everyone in this movement, that we have more to gain from the masses than to be alone in our ideology. It often feels like people don’t understand the gravity of what is happening in this country and around the world. The danger and high stakes we face for being a part of those marginalized groups liberals pretend to represent. They can’t understand what the reality is for undocumented people who are fearful of losing their DACA status and be deported, for those with different abilities who depend on Obamacare and Medicaid, for trans women who fear their name will be added to this year’s deadliest record of violent killings, for queer people attacked and then later placed in an ICE detention center for being a queer immigrant in Orange County, for Muslim women who are afraid to wear their hijab because people are setting them on fire, and for black freshmen in college being put on lynch lists, because now white people have gotten “their country back”. Let’s understand that all of this racism, hate, and violence was already true and occurring in our lives before Trump. That these same oppressed groups have been ignored by those same white liberals that are now consumed and overwhelmed with a need to take action. After they have spent years ignoring us when we have screamed and stated openly that America is a racist, white supremacist, fascist country, created through the genocide and physical erasure of indigenous people, and built on the backs of Africans that were kidnapped and brought over here and forced into slavery.

Let’s understand all of this, all that has happened and continues to happen, and respect the resistance that has existed and will continue to exist even after Liberals leave because they become satisfied and content with Trump because gay marriage is protected and the Trans-Pacific Partnership was killed.

So while it might appear that the masses have awoken, what use are those masses when they are mostly white liberals filled with denial of their own complacency and contribution towards maintaining the hierarchy of violence?

The fight is against the state and all those who are in place to protect it, liberalism in effect has become the state’s first line of defense. Their role is to funnel dissent into the electoral process for the Democratic party, to keep us dependent on them through funding, and to enforce that our tactics remain weak and passive.

Movements do not move forward on their own. They take a lot of labor, both emotional and physical. We stand on a foundation of resistance built by the blood and hands of our ancestors, as well as those in recent years. People have fought hard against co-optation and peace policing to get to the place we are now, where taking the streets is a given and not a question, to the point where cops now preemptively block every freeway entrance out of fear we will out maneuver them again. With each wave, the same debates resurface, "no police are not your friends", "yes it's okay to take the streets”, "no property destruction isn't violence" this results in keeping us stagnant.

What is the point of pushing the line if we are only to end up back at the start due to the dominance of liberals in our movement?

We might all hate Trump, we might all fear what his presidency will bring, but we don't all have the same consequences of a Trump presidency, or any other president for that matter.

There is a lot of talk about unity right now, there is this desire by those who seek liberation and revolution to align themselves with liberals. This must end, we must stop chasing the masses, we must realize that we have to be the people we have been waiting for.

If you enjoyed this writing and other pieces by Bobby London, please consider being a patron and contributing to a monthly or one time donation here.

original image (1800x661)
https://thisisbobbylondon.com/2016/11/17/f...
Add Your Comments
LATEST COMMENTS ABOUT THIS ARTICLE
Listed below are the latest comments about this post.
These comments are submitted anonymously by website visitors.