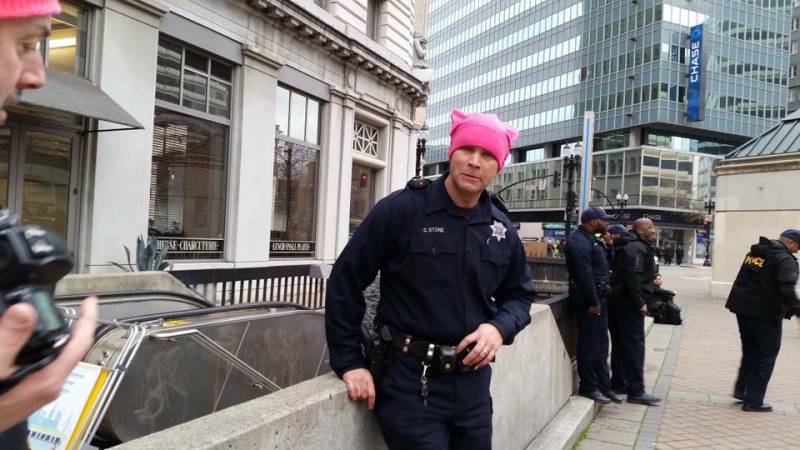 Moving on to the anger: white women, stop. Shut up and listen. THE POLICE ARE NOT FEMINIST.

This is, of course, if your definition of feminist is not even that intersectional and you only care about "women"-- cuz cops kill nonbinary folks, genderqueer folks, and men. They kill women's children.

But they "protect" white women and we need to disavow and dismantle this.

I have been bitching all day about these hats. The gender essentialism of pussy = woman. The PINKNESS of it (what about vaginas which aren't pink? Also didn't we all agree that any gender can like any color and forcing girls into pink is fucked up?)

I'm all for radical crafting and love that mothers, grandmothers, so many people gifted their loved ones with these hats made from love. And I'm into fierce femininity for all genders and pink as radical AF.

But this photo should disturb you, and make you question the depth of this and other related symbols, and go have a convo with white women in your life and be like "WHAT THE HELL."

Cops were created not only to protect slavery, but have an equally long history of "protecting white womens' virtue" by murdering black men. Police are inherently racist and violent. AND disgusting and creepy - if you're a white woman who thinks Republicans' concerns with women having sex is creepy you should damn well be appalled by the cops. Plus cops are more likely to bear women. They routinely assault women in jail and custody, INCLUDING RAPE VICTIMS.

White women:
Our liberation is tied up in abolition. I know many of you are just now learning this. G-d knows most of you seemed to have never even set foot in Oakland before so you don't even know the specific disgustingness of OPD's REPEATED RAPE OF A CHILD AND DEPARTMENT WIDE COVER UP. But that's an entire other post as long as this one...

But if you didn't know, like, any of this, consider today the first step in education and action and come learn. Except on your way to learning, which will include mistakes, don't fucking praise the cops along the way. Like do fucking not. That is not a casual newbie mistake. That is normalizing fascism.
§Oakland cop Stone wearing "Pink Pussy Hat" after Women's March Oakland
by herstory Sunday Jan 22nd, 2017 11:00 AM 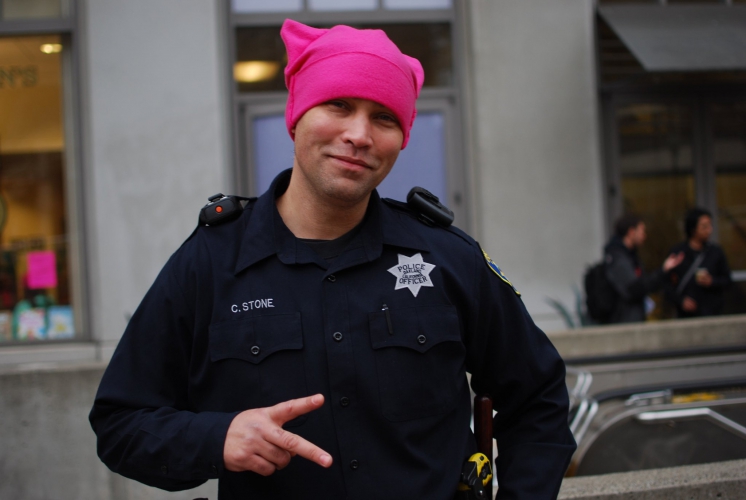 original image (2048x1371)
A member of the police force that trafficked and covered up the rape of an underage woman.

Oakland Police Headquarters Banner Hang: OPD Guilty of Human Trafficking & Statutory Rape
https://www.indybay.org/newsitems/2016/07/18/18789222.php
Add Your Comments
Support Independent Media
We are 100% volunteer and depend on your participation to sustain our efforts!