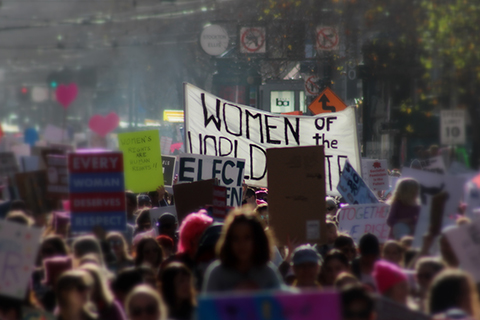 On January 20, the one-year anniversary of the inauguration of President Trump, women, children, and allies worldwide demonstrated in hundreds of cities, often in freezing temperatures, to stand up against against Donald Trump and his policies, patriarchal and racist violence and oppression, and for a brighter future for women. The numbers were massive across North America, with 300,000 Chicago, 200,000 in New York City, a half million in Los Angeles, and at least 100,000 in San Francisco. Tens of thousands marched in medium-sized cities such as Oakland, and in smaller towns such as Fresno, thousands took a stand. On January 21, many more took to the streets of Las Vegas, Berlin, Paris, London, and other cities across the globe.

U.S. organizers issued a unifying declaration of principles for the 2018 Women's March: "We believe that Women’s Rights are Human Rights and Human Rights are Women’s Rights. We must create a society in which women — including Black women, Native women, poor women, immigrant women, disabled women, Muslim women, lesbian queer and trans women — are free and able to care for and nurture their families, however they are formed, in safe and healthy environments free from structural impediments." Named goals included ending violence, reproductive rights, LGBTQIA rights, workers' rights, civil rights, disability rights, immigrant rights, and environmental justice.

Flyer Distributed at the Women's March in Santa Cruz |

Women's March Chico 2018: "They Heard Our Voice, Now They Will #HEAROURVOTE" |

Publish your Women's March reports, photos, video, and audio to Indybay at indybay.org/publish.php.