Add an Event
Newswire
Calendar
Features
Home
Donate
From the Open-Publishing Calendar
From the Open-Publishing Newswire
Indybay Feature
Publish to Newswire
Add an Event
Related Categories: Santa Cruz Indymedia | Police State & Prisons
Flyer Distributed at the Women's March in Santa Cruz
by Robert Norse (rnorse3 [at] hotmail.com)
Saturday Jan 20th, 2018 11:22 PM
This is an updated version of a flyer originally prepared last year in response to repression at the Bookshop Santa Cruz in its hypocritical reading of George Orwell's 1984, while excluding disfavored activists from the store, even from access to its publicly funded bathroom. My broader focus was on the criminalization of the poor and specifically poor women.
The tumultous massive Women's Day march seemed to have as many as last March's huge march, though not having a helicopter it was hard to tell. Folks packed into Pacific Avenue and at points it became hard to squeeze through.

Many signs, many unfamiliar faces, hundreds of children, dogs, women and men. Organizations with huge banners and an ocean of anti-Trump signs and pussy hats.

As ever, I was concerned about this being another "kick out Trump and reinstall Trumpism under the Democrats" rally with little or no focus on local discrimination against women (specifically homeless women). I did see one "End the Sleeping Ban" sign.

Many (myself included) have delighted in the drop in citing people for sleeping at night on public property and the opening (for a few) of the San Lorenzo Park as campground, However the Sleeping Ban law is still on the books; City Council is still in the hands of a repressive Terrazas majority; and homeless women (and men) continue to face harassment and citation for just being in public spaces.

Neo-liberal hypocrites like the Coonerty clan (that own and manage the Bookshop Santa Cruz) continue to play politics with homeless lives, supporting anti-homeless laws like the Parking Lot Panic law (which bans being in a parking lot without parking a vehicle or walking directly through).

The question I've repeatedly asked is whether these large nationally organized parades actually lead to any real local action on human and civil rights issues. I didn't see much come out of last year's March Women's March.

My interviews and commentary will be broadcast on Free Radio Santa Cruz and will be archived 1-22 at http://www.huffsantacruz.org/Lostshows.html .
http://huffsantacruz.org
§The flyer
by Robert Norse (rnorse3 [at] hotmail.com) Saturday Jan 20th, 2018 11:25 PM 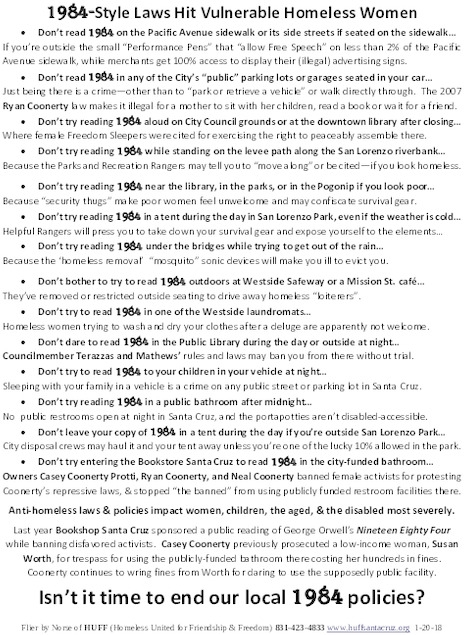 Download PDF (517.6KB)
Download and distribute--not just for the Women's Day March.
http://huffsantacruz.org
Add Your Comments
Support Independent Media
We are 100% volunteer and depend on your participation to sustain our efforts!