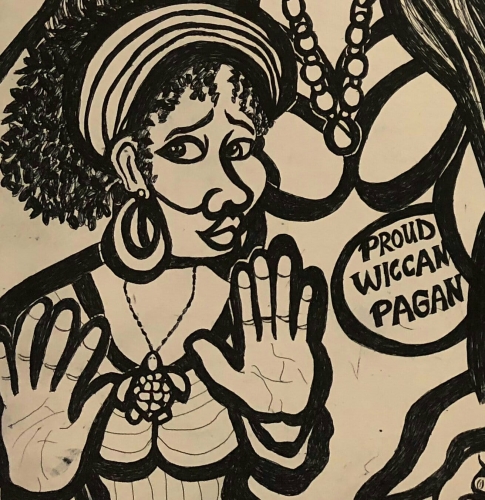 original image (1311x1351)
I'm at the very front and on the edge of a precipice; my folding chair clings to the sidewalk curb dropping to the street. Behind me swells a massive sea of women. A news radio show announces we are 100,000! The ocean of ladies and a smattering of men wave colorful hand-made signs high, covering the whole floor of the Civic Center park basin, from edge-to-edge, four blocks square!

A pleasant shiver runs up my spine realizing I'm sharing my Women's March with all the others in every major city of the world and their outlying areas. The global focus for 2018 is on getting more people to vote and encouraging women to run for political office. The Speaker's Rally opens with a beautiful blessing by an Ohlone woman honoring the lineage back to the first original Ohlone Indigenous people, of what is now called the San Francisco Bay Area, whose land we were now standing on. Rally speakers are preparing with enthusiasm to give voice to: # MMIW (Murdered, Missing, Indigenous Women's) long time crisis, immigrants' rights on every level and ethnicity, sexual harassment and assault illustrated by the "# Me Too" and "# Times Up" and racism, voting, homeless rights, hate crimes, disabled people's rights, LGBTQ injustices and sympathy for the Palestinian People from one of our Jewish Community Center leaders.

Our expressive hand-made signs seemed to draw all sorts of folks, and I had lots of opportunities to chat briefly and do short interviews.

A strange feeling ripples through my body to its core; something is off, but I'm not sure what? I hope for an answer in my discussions.

Many comment that there were three times more people last year 21 January 2017 and that you absolutely could not move through the sea of women overflowing down all the side streets. Others say perhaps there are fewer people because this year's march is in many more cities. Yet other liberal women interject that there are less people because of dissatisfaction with representation via topics; so hopes were shattered around more specific women's issues like: equality in employment and health etc. They continue with something to the effect that the progressives and the liberals are monopolizing the podium and repeating over and over mainly about immigrants' rights. They are glad it is mentioned, being a critical point and all, but feel going on about it squeezes out space for other topics. These same ladies are very pleased that sexual harassment is being brought up, yet they make a point of saying they were not coming back in 2019! Just before the Women's March day, I met with different groups in a cafe, and in both there were some who said they went to the march last year, and they weren't going back because ultra-liberals had hijacked the agenda and made it so repetitively anti-Trump. This distracted people from addressing other issues and leaving very little room to do so. The vast majority of gals overall are very happy with what is being covered by the speakers here today at the March.

At one point, a professional woman advocate for the homeless, who had lived on the streets in her past, speaks with fervor. She finishes, and I am shocked; few people cheer or clap! I wonder why? The speaker before her and the one after, receive generous responses, but not her? Maybe the anti-homeless campaign in San Francisco is working?! Many politicos and local media here say they feel for the homeless and are on their side but still spew anti-homeless rhetoric, which amounts to blaming these disadvantaged people for their very situation!

Some March participants complain to me about the excessive cursing of Trump by a couple of the speakers, that it's crude and that the focus on him robs everyone of airing other crucial topics.

On the way out my group runs into another; they too comment on how last year's March was three times larger and add that this year there are more men. I remark: "Isn't it great! I saw on social media how women were inviting more supportive men." These gals quickly retort that yes, they had noticed these men with signs, gay and straight with families, but they were addressing a serious problem. They had observed first hand, lone males acting like, what they called “sharks.” These “sharks” pretended to take photos of colorful signs but instead focused much more on taking pictures of younger and a little more scantily-clad women. They say they are very protective of their sister marchers. One woman from that group interjected that not all the lone men photographing were doing this, some actually took photos of signs and were asking questions about them. It made me think immediately of my partner! He often goes out with his camera to photograph some activist event or art/theatre production for articles he writes and goes through a bit of a painful process, being a white male, of making sure no one can misinterpret his intentions as being anti-racist, classist, sexist or whatever. Now I could finally really put myself in his shoes, I had always been sympathetic to his dilemma, but this felt different and deeper. Back to the real live people at this Women's March and the “sharks” being discovered at it; they were intruding on a safe place in the guise of pretending to be supportive!

Overall, for my group, the day was indeed a wonderful, uplifting and refreshing experience that gave us hope and more energy for our individual activisms!

That unknown sensation keeps needling me though; this leads me to theorize about what it could be: it seems clear that today's March had lost community members and some were promising not to show up next year. I was perhaps, with great concern, over-focusing on that. But, by the next day, deflated, I tell my mate: Maybe the organizers of the March are right in showcasing progressive women, partnering their activism, with liberal democrat gals. Again, their strategy is to get out the vote ASAP so that the democrats can take over next term, so, they probably don't care too much if they lose some ladies. Maybe they're "right" in this strategy? I don't know? It feels like the same thing round-and-round for endless decades, the lesser of two awful choices: democrats or republicans. I got a crazy thought; maybe it would be "better" if Trump won again, but at what terrible cost to so many poor and middle class people and to our planet itself? It could mean a faster "death" for all, meaning a better chance for more things to go wrong all at once with the U.S. and other countries and our planet. We would be creating an emergency global domestic and environmental crisis. This could force world leaders to beg scientists for a solution to save our lives and our planet. Such scientific solutions have been gathered by author Paul Hawken in his book Drawdown: The Most Comprehensive Plan Ever Proposed to Reverse Global Warming (2017). This might give us a real chance to save our world. Hopefully, everybody may suddenly realize if we don't, we're dead? Or maybe a little slower death via the democrats who say justice for all and the environment but then keep doing pretty much the same old global socio-economic and environmental behavior as the republicans?

My sweetheart is chipping in right now. He thinks there's some value in going for more liberal voters, like this year's Women's Marches are doing, it's important for local elections, ballot initiatives and getting progressive judge in. I realize that I strongly agreed with him on this. However, I still have this strong tingly, now almost horror movie feeling, twisting up inside wanting to come out! I am adding to this editorial article the positive things that my partner spoke about, but, I'm starting to feel depressed anyway thinking of the endless seeming: here-we-go-again, round-and-round, politics in U.S. and most of the world.

Trying to be more positive, I guess it's good that women progressives are getting along and joining forces with liberal democrat ladies. I have seen progressive and liberals in the San Francisco Bay Area fighting for decades. Finally, everyone appears to be getting along for the most part, and that's a first.

All of a sudden out of nowhere I start getting angry?! I begin erasing all the World Women's Marches in my mind as bullshit or should I say cow shit?! What is happening to me?! Oh my gosh! It is a polar bear that gives me the clue, to understanding what and why! My partner had just finished telling me about the bear.

The bear! That's it! That's what's friggin' missing! I too had waxed asleep under the spell of denial like one of those living in a sleeping pod 24/7 in the Matrix movies and was thinking erroneously that I was actually living. Yes, in the March there was nothing about our most dangerous threat to our immediate daily existence--nuclear weapons! And nothing about the critical dangers of climate change! Maybe one person among the speakers shouted stop nuclear weapons and climate change like they had briefly at other Marches in other cities, but truthfully, that's seriously like saying nothing at all! It's not enough to just check a box, that a couple of speakers briefly mentioned it, and pretend that it was really covered! Why don't we focus more than just a cowardly bit on these imminent crises, and how we can possibly survive them as a species?! In a way the most important issues have been buried yet again in my mind too, but all along are trying to get my attention, (I had even unwittingly referred to them), but not even I was listening.

My love, realizing how upset I am, made some wonderful observations and suggestions for me:

"A lot of people happen to be focused on gender issues right now, so it's an opportunity to make strides here, even if it isn't such an imminent threat as say climate change. People are acting like they have all the time in the world. I've been catching myself doing that too. At the same time, everything's connected. The patriarchal nature of our society has created and is perpetuating all these dire crises. Maybe, take a break from thinking about the Women's March. You've just put quite a bit of time and energy into it anyway. Maybe come back to it later. It is pathetic and terrifying that global warming and nukes can't mobilize nearly that many people. Why don't you resume work on your book for a while?"

My partner met the polar bear at the LA Women's March; it of course was someone in a polar bear suit.

This polar bear is towing a real, rapidly melting, block of ice. I imagine her, all alone, so very brave and bold, forcefully weaving and slipping through the enormous crowd. She tries to keep grinning, perhaps thinking, "A spoonful of sugar helps the medicine go down." The big, brazen white she-bear zips through the 700,000 that are at the humongous LA March! With each brush of her thick bushy fur against them, she pushes through tenaciously. It's as if she carries an invisible magic wand and is dashing them with her invisible sparkling powder as if to say: "Wake up! Rise up! Awake ye humans! The ice is melting! Don't forget me! Don't forget you! Don't forget! Don't forget!" 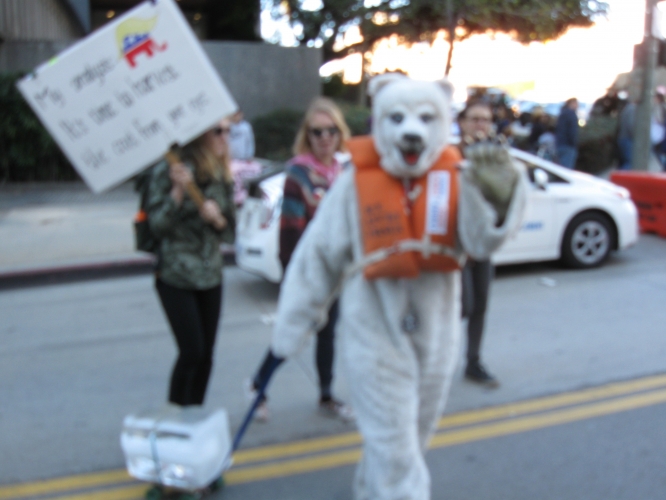 original image (3264x2448)
Add Your Comments
Support Independent Media
We are 100% volunteer and depend on your participation to sustain our efforts!