Add an Event
Newswire
Calendar
Features
Home
Donate
From the Open-Publishing Calendar
From the Open-Publishing Newswire
Indybay Feature
Related Categories: U.S. | Government & Elections | Health, Housing & Public Services | Police State & Prisons | Womyn
Leaked Draft Opinion Reveals the Supreme Court Intends to Completely Overturn Roe v Wade
by Dave Id
Monday May 2nd, 2022 8:51 PM
In a stunning breach of US Supreme Court secrecy, a draft majority opinion written by justice Samuel Alito has been leaked. The would-be ruling is outrageous, sneering at the concept of a constitutional right to privacy and bodily autonomy. Alito makes a case for completely overturning Roe v Wade (1973) and Planned Parenthood v Casey (1992), allowing states to outlaw all abortions without exceptions for rape and incest. Half of the country will lose access to safe and legal reproductive services, with ominous implications for countless other long-established rights.


"We hold that Roe and Casey must be overruled.... no such right is implicitly protected by any constitutional provision" — Samuel Alito


Politico has published a draft majority opinion for the US Supreme Court in the matter of Dobbs v. Jackson Women’s Health Organization. Oral arguments were made in the case in December 2021 and the draft ruling is dated February 2022. With hearings concluded for this SCOTUS term, a final ruling in the case is expected within the next month or two. The actual decision may or may not read exactly as the draft does, but a majority agreed to end legal protections for a woman's right to choose, and they chose Alito to write the opinion for them. Without defections from the court's right-wing justices such that that they lose their majority before a ruling is issued, Roe v Wade will officially be history within a matter of weeks.

The Mississippi law at issue makes most abortions illegal after 15 weeks of pregnancy, about two months earlier than Roe and later decisions allow. But, that restriction is about to become moot with the SCOTUS completely overturning Roe v Wade. Around ten states have anti-abortion "trigger laws" on the books, set to go into effect should Roe be overruled. It won't be long before abortion is illegal in at least two dozen US states.

Abortion has already been effectively been outlawed in Texas, since September of last year when the state passed its anti-abortion vigilante bounty law, enabling anyone from any state to sue any woman who receives an abortion in Texas, as well as anyone who assists in any capacity. The Supreme Court allowed that law to stand in a "shadow docket" maneuver, signaling their intent with the Mississippi case to severely damage Roe or to even toss it.

Fortunately, California protects a woman's right to choose in statute and the state constitution, which covers tens of millions of women. New York and other populous left-leaning states have similar protections. But, most states do not, leaving upwards of a hundred million or more American women to fend for themselves with at-home or black market abortions. Those with enough means can travel to abortion "sanctuary" states. Untold numbers will be forced to bear children against their will, no exceptions under the law.

Laws copycatting Mississippi and Texas have already passed in a number of states, and the post-Roe wave of draconian reproductive laws will be even worse. Needless misery and cruel punishments for women and abortion providers are about to explode across the country, whenever they dare defy the misogynistic laws of their home states. Some states even threaten women who leave their state for reproductive care.

Meanwhile, pusillanimous Democrats will undoubtedly bemoan the loss of reproductive choice. They'll pretend that they didn't see this coming, that they didn't squander the opportunity to do something during recent periods when they controlled the White House and the US Congress; that protecting the "tradition" of the filibuster was more important than women's rights, civil rights, or democracy; that it was just too radical to expand the courts, even after a seat was stolen from Obama and one-term president Trump, who lost the popular vote, got three picks for the high court, along with placing hundreds of other reactionaries on the federal bench, many grossly unqualified. There's still time for Democrats to act, yet it would be surprising if serious legislation is enacted at the federal level before January, when the next Congress convenes.

At this point, Republicans have a good shot at winning control of one or both houses of Congress this November, and they have at least a 50/50 chance at retaking the presidency in 2024, too. With whatever power they hold, they'll to try to drag the country back to the 19th century, wildly emboldened now that the Supreme Court has untethered them, likely attempting to diminish and destroy civil liberties nationally, despite their claims of an interest in "states' rights."

Until Democrats and so-called moderates grow a spine, things are about to get a whole lot worse on this and many other fronts. The majority in this country still supports a woman's right to choose, voting rights, equal protection under the law, and privacy, things we've come to expect throughout our lifetimes, at least nominally over the last half century. What's left for the people to do? Take to the streets? Shut a whole lotta shit down?
https://www.politico.com/news/2022/05/02/s...
§NOTICE: This opinion is subject to revision before publication
by Dave Id
Monday May 2nd, 2022 8:51 PM 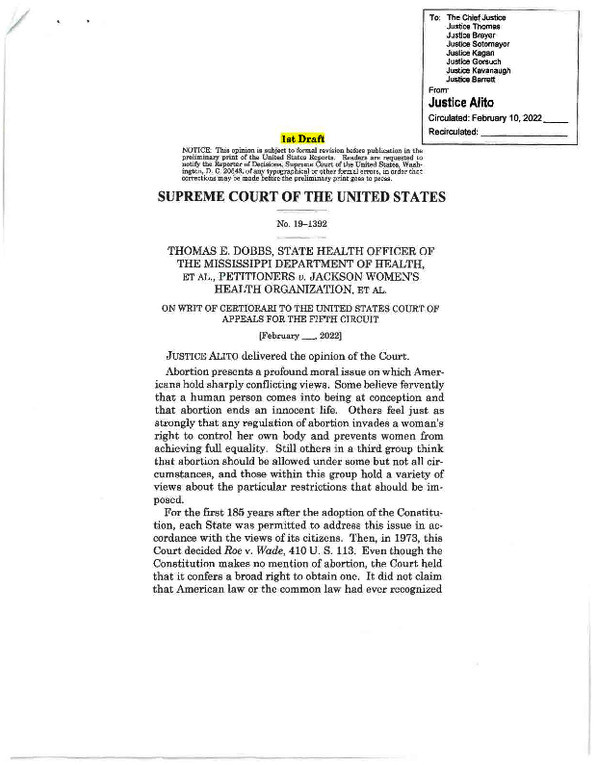 https://www.politico.com/news/2022/05/02/s...
Add Your Comments
LATEST COMMENTS ABOUT THIS ARTICLE
Listed below are the latest comments about this post.
These comments are submitted anonymously by website visitors.