Add an Event
Newswire
Calendar
Features
Home
Donate
From the Open-Publishing Calendar
From the Open-Publishing Newswire
Indybay Feature
Related Categories: East Bay | Arts + Action | Government & Elections | Health, Housing & Public Services | Womyn
Remembering Wire Coat Hangers Before Roe v. Wade
by Art and Interviews for Abortion Rights
Saturday Apr 23rd, 2022 5:18 AM
On a national day of action on April 21, abortion rights activists in Berkeley, California cried out that the constitutional right to abortion is under threat. Interview with woman who says she does not regret two abortions is .mp4 27 seconds long.
Copy the code below to embed this movie into a web page:
Download Video (7.4MB) | Embed Video
Just as abortion rights activists were headed to Sproul Plaza with their moving art exhibit, the news came that all UC Berkeley students were being advised to shelter in place after a reported emergency at the campus’s Cesar E. Chavez Student Center, directly adjacent to the Sproul.

Not to be deterred, the demonstrators headed to the nearby BART rapid transit station to take their appeal to the streets. They mounted their display of green flyers on wire coat hangers and started talking to people.

One woman from Southeast Asia said she got married when she was 16 and had two abortions during her marriage. She had three children and said that if she had not had those abortions she would not have been able to take care of the children she did have. In the video background, the ranting of a young man with anti-abortion sentiment can be heard.

Other people who passed by commented on the display with the names of 26 states where reproductive rights are under attack. Women who were alive during the 1960's before Roe v. Wade became law of the land said they understood the significance of wire hangers with green flyers. They recalled that the coat hangers were a well-known instrument of "back alley" abortions. In striking comparison, a woman born in 1980 asked "why the wire coat hangers symbol?" as she had no experience of life before Roe v. Wade.

Many people said they were unaware of how urgent it is to act now to save the landmark legislation before coming upon the exhibit. Demonstrators made their point and made it well.
http://riseup4abortionrights.org
§Art display with message
by Art and Interview for Abortion Rights
Saturday Apr 23rd, 2022 5:18 AM 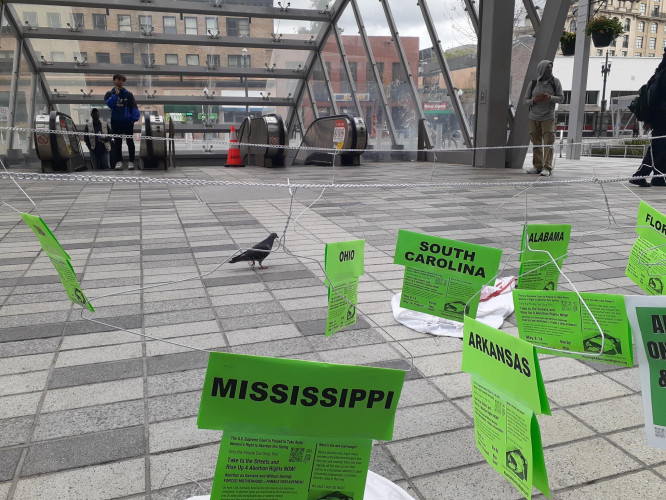