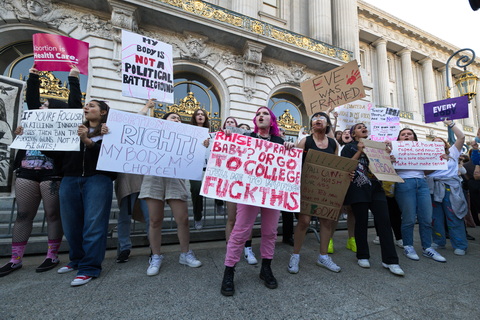 The National Mobilization for Reproductive Justice-SF and other organizations called for everyone in the San Francisco Bay Area who supports legal abortion to protest on the streets when the much anticipated Supreme Court decision in Dobbs v. Jackson Women's Health Organization was announced on June 24.

Street protests were quickly organized in cities and towns large and small, most at 5pm nationwide.

In San Francisco, people rallied in several locations, including in front of the Phillip Burton Federal Building, at City Hall, and at the intersection of Powell and Market. The rally at the federal building morphed into a march to the cross streets of Market and 8th, where hundreds of demonstrators sat in the middle of the intersection for 49 minutes. The number of minutes was chosen to represent the number of years Roe v. Wade was law of the land.

During that sit-in, an estimated 3,000 people converged on the intersection from multiple marches that had started at different locations. While protesters blocked traffic at the Market Street location, thousands more protested at City Hall and in other parts of the city. About 200 people walked onto Highway 101 to demonstrate even more resistance. The Bay Area cities of San Jose, Berkeley, Oakland, San Jose, San Rafael and others also saw fast response actions on the 24th. Demonstrations continued on a smaller scale throughout the weekend.

San Francisco is a Pro-Choice Town! Sit-In at Market and 8th |

No Going Back! SF Rally Against The Attack On Reproductive Rights In San Francisco |

Roe is overturned -- Protests Today, near you |

Overturning Roe is Illegitimate: SCOTUS Decision Must Not Stand