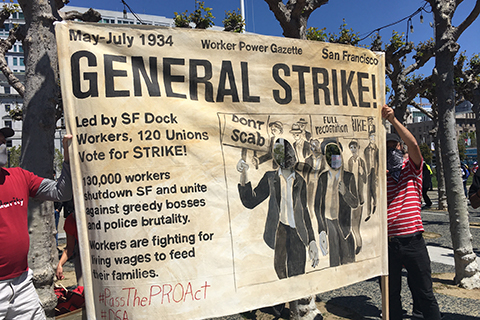 May 1 was chosen as International Workers' Day in 1889 to commemorate the Chicago Haymarket Affair of May 4, 1886, as an annual reinvigoration of the fight for workplace improvements such as the eight-hour work day.

This year, beginning to emerge from a deadly year-long pandemic, actions marking May Day across Northern California demanded worker rights, housing for all, and racial justice, expressing solidarity with the Chilean general strike. Marches and rallies were held in San Francisco, Oakland, San José, and Fresno. In Oakland, a vacant house was reclaimed to highlight real estate speculator greed and a nighttime march which called for abolishing the police was met with a large and aggressive police presence. In Alameda, protesters rallied outside the homes of those who called police on Mario Gonzalez, leading to his death in April. A "Love Over Hate Unity march and rally" was held in Mountain View. Online events examined the history of May Day, celebrated social justice struggles, and looked back at America's imperialist war in Vietnam.

If you attended a May Day action, publish your photos, video, and reports on Indybay.

Call to Support Organized Labor, Free Mumia and Stand Up for Black/Brown/Asian Unity |

Many Unions Join in SF May Day March and Rally |

Angela Davis in May Day Visit to ILWU Union Hall |

May Day Parade & Rally for Workers’ Rights & Racial Justice (10am) |

Lyrical I and the Uprising Free Concert (12pm)

May Day Rally: From global pandemic to global class struggle

Celebrating the Struggles of the Past |

46 Years After the End of the Vietnam War: A Conversation About Empathy & Healing