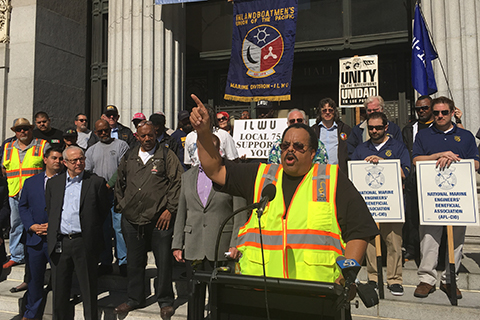 ILWU longshore workers, truckers, and companies at the Port of Oakland held a press conference in front of City Hall on April 18 to oppose Oakland A's billionaire owner John Fisher's plan to build a new baseball stadium and 4,000 condos costing more than $1 million each on the Howard Terminal in the Port of Oakland. Speakers talked about the displacement of African Americans in East Oakland when the Oakland coliseum was built and the gentrification now in West Oakland where an African American community has lived for decades.

Fisher also owns the GAP and controls the Rocketship and KIPP charter schools. He previously tried to grab land at Laney Community college but was defeated when the community and the Peralta Federation of Teachers organized against the scheme. The present privatization deal at Howard Terminal is backed by Oakland mayor Libby Schaaf who has ignored the ILWU and even the capitalists who profit from the port in her support for Fisher's A's stadium.

ILWU Local 10 business agent Aaron Wright called it an "insane" idea since there is no infrastructure for the new stadium and it would completely disrupt the longshore and trucking jobs along with the community. It would also force thousands of trucks onto the streets of Oakland further polluting the community.