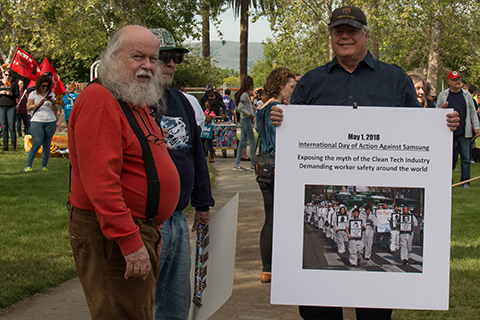 Coordinators of a global day of action against Samsung on May 1, 2018, say electronics production is chemically intensive with hazardous chemicals resulting in contamination that has sickened many workers. Samsung factory workers in South Korea have died due to occupational illnesses. The South Korean government and courts have connected a growing number of cases of serious occupational illnesses to work in Samsung factories.

Activists in San José, California rallied on May 1st to call attention to the unsafe work conditions for Samsung employees around the world. They demanded that Samsung withdraw legal actions in South Korea and Vietnam that would suppress chemical monitoring and workers’ abilities to speak about their working conditions. Samsung has actively opposed trade unions for decades.

The San José Samsung demonstrators joined the city's International Workers Day March and Rally that included Fight for 15 (movement for a minimum wage of $15/hr), the Laborers' International Union of North America, the International Migrants Alliance, SEIU, and PAWIS--the Pilipino Association of Workers and Immigrants, amongst many organizations. All joined in the call for respect for workers and worker safety around the world.