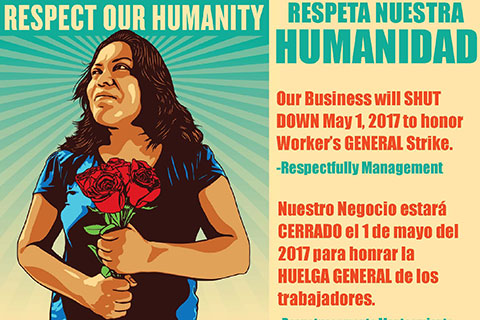 Shut It Down May 1st: Respect Our Humanity
International Workers' Day Marches and Strikes in Northern California

Oakland Sin Fronteras writes: International Workers' Day has been a time to uplift the struggles, honor the sacrifices, and celebrate the triumphs of working people across the world. As we stand on Ohlone Indigenous land this May 1st, we march in celebration and in resistance with our families, friends, neighbors, and co-workers in our communities, and in solidarity with working people across all borders, to continue the historic struggle against economic and social inequity. With a Trump administration in power, a rising fascist tendency, and growing economic and political oppression of people everywhere, this May Day we march in the spirit of organizing and defending our communities from state violence and capitalist exploitation, and toward liberation and self-determination.

In the San Francisco Bay Area, more than thirty organizations have endorsed the Oakland Sin Fronteras May Day March and General Strike, and the 2017 Points of Unity, which state: We demand an end to all deportations. We demand respect for all workers’ rights and we defend workers’ efforts to organize. We march against the policing, imprisonment, and surveillance of our communities, and commit to fight the expansions and increased militarization of these systems under the Trump administration.

2008: ILWU Shuts Down All West Coast Ports To Protest War | DASW Calls for End to the Targeting of Immigrants and Latinos to Enlist | Reclaim the Streets In San Francisco | San Francisco State Students Walk Out, Join Workers on May Day | May Day Protests in Arcata | May Day 2008 Actions in Santa Cruz and Watsonville | May Day Becomes an Annual Tradition for Immigrant and Workers' Rights | May Day Revival on Three Fronts: Labor, Immigrant, and Antiwar