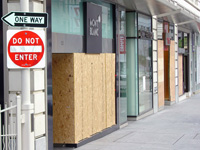 Anonymous communiques posted to Indybay report that on the evening on May 1st approximately fifty people marched through the streets surrounding Union Square in San Francisco. Blockades were made in the streets with trash cans and news stands. Windows of numerous businesses were smashed including those of De Beers, Prada, Coach, Tumi, Wells Fargo, Longchamp, Macy's, Armani, Crate and Barrel, Montblanc, Urban Outfitters, and Guess. Chants of “anti-Capitalista” and “fuck the state” were yelled while participants threw out fake $100 bills. Paint and water balloons were thrown into downtown businesses, damaging merchandise in the stores. According to the reports, the action was planned without the use of electronic media such as websites or cell phones and was completed within a matter of about ten minutes. The 100 block of Grant Street appeared to be the hardest hit. Corporate media has reported that the total damage was in the tens of thousands of dollars. No arrests have yet been reported.