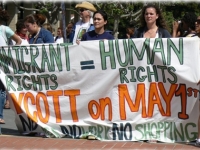 May 1, 2007 was the first anniversary of the Great Boycott of 2006, in which immigrants led walkouts, boycotts, and protests all over the US. May 1st is the original International Workers' Day, and it has been reclaimed in the last few years to honor immigrants' labor and contributions to the society and economy of the United States. The 2007 national day of action called attention to the "unfinished agenda" of fixing the country’s broken immigration legal system, and demanded a just and humane immigration reform law that grants full legalization for all people. Across the country, millions protested ICE's increasing militarized raids on families' homes, in which people are captured and held incommunicado, violating their due process of law and causing financial hardship to immigrants' US-born children. The Movement for an Unconditional Amnesty says, "These measures do not serve to stop immigration, but (force) immigrants underground, encouraging black market immigration and (causing) the separation of families."

Reports are that thousands marched in

San Jose. In Los Angeles, police shot projectiles at a rally tens of thousands strong. Protests were held in other cities including

1 | 2 ). The ILWU reportedly stopped work in 6 west coast ports, and May 1st was also a day of nationwide student walkouts. In Mexico, the teachers' union and APPO entered Oaxaca's zocalo for first time since October 29. In Turkey, police responded to the annual May Day rally with mass arrests, beatings, tear gas, and water cannons.