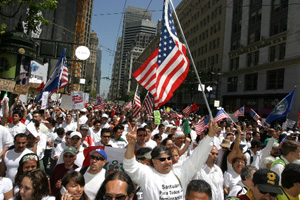 Demanding recognition for their many contributions to American society, and taking a stand against discrimination, millions of immigrants and their supporters marched in over 75 U.S. cities on Monday, May 1st. Nearly one million marched in California alone. Reports from L.A. cite hundreds of thousands turning out. San Jose and San Francisco each were estimated to have had 100,000 people march. Throughout Northern California tens of thousands took the day off from work or school, refused to buy anything, and marched united for immigrant rights.

May Day Photo Gallery featuring hundreds of photos from all over the Bay Area and Northern California (Publish your own photos, reports, and video.)

SAN JOSE:
In the South Bay, another estimated 100,000 immigrants rights supporters marched through the city, likely making it the largest demonstration ever in San Jose history. Many businesses closed for the day.

HUMBOLDT:
12:50pm: Immigrant Rights March from Arcata to Eureka on 101 in Humboldt "attacked" by cops.

SAN RAFAEL: About 5-7000 people marched in in the biggest march ever held in San Rafael.

CONCORD:
Over 5000 marched to Santos Plaza.

OAKLAND:
Participants estimate more than 15,000 marched miles to the the federal building in downtown where speakers such as Congresswoman Barbara Lee had words of support. Line of marchers "as far as the eye can see."

UNION CITY:
Over 1,000 people marched through the streets of Decoto in support of the great American Boycott!

SANTA CRUZ: a total of more than 300 people are clogging up both entrances of campus, causing traffic jams and buses to run late. The main entrance has been basically shut down, and UC police are rerouting drivers to the West entrance. Students erected a mock border at the campus entrance to highlight the challenges faced by Latinos entering the US for work.

WATSONVILLE:
A May Day demonstration in Watsonville CA, the self-proclaimed strawberry capital of the world, drew about 10,000 people in a city of 45,000 out into the streets.

SACRAMENTO:
Thousands gathered at Southside Park for a march to the Capitol.

MODESTO:
Close to 10,000 people, most of them working class Latinos/Chicanos, came out to protest the proposed HR 4437 legislation.


NATIONAL: Most major U.S. cities have reported large marches, in many cases the largest marches the cities have ever seen. Chicago's march was the largest in the nation with as many as three quarters of a million people having taken to the streets. LA also reported crowds numbering in the hundreds of thousands. Miami, D.C., and Denver report marches in the tens of thousands.
More Coverage Can Be Found On: US IMC, L.A., Portland, Colorado, Chicago, NYC, D.C., Miami