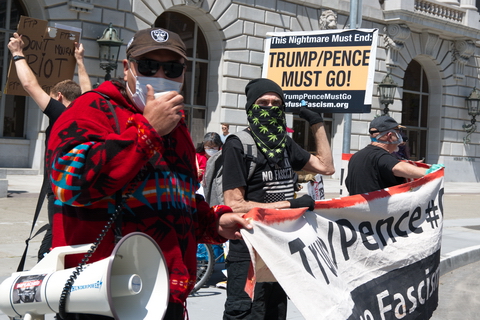 Leon Kunstenaar writes: The COVID-19 pandemic has exploded the myth of American equality to reveal a society of medieval injustice and fascistic racism. The accumulations of bodies, too numerous to bury, in parked trucks and old age home closets; a government controlled by a deranged clown; a major political party devoted to the wealthy few and reconciled to massive deaths of working people as it uses catastrophic unemployment to consolidate control, are symptoms of national dissolution.

With the so called "bailouts," reeking of incompetence and corruption to the benefit of Trump's contributors, the economic cataclysm is reimposing on the supposedly strongest and wealthiest country in the world, the food lines and soup kitchens of the Great Depression. Those attempting to resist, the ones at the bottom who can't "work from home" the food workers, truckers, nurses, warehouse people, emergency workers, not to mention the homeless, are reclaiming the traditional international workers' day of May 1.

May 1 has been recognized throughout the world, especially in Communist and Socialist countries, as the holiday to celebrate working people. Though supressed by the anti-communist and anti socialist hysteria of post WW II America, it is a genuine American holiday, having been originated by the unjust hanging of four labor activists in Chicago in 1887. The embers of May 1, May Day, the holiday that refuses to die, were rekindled today in front of San Francisco's Ciy Hall by those facing destituion as the nation faces its greatest threat since the Civil War.

May Day Car Caravan in Fresno |

Coronavirus is a Disaster for Sex Workers |