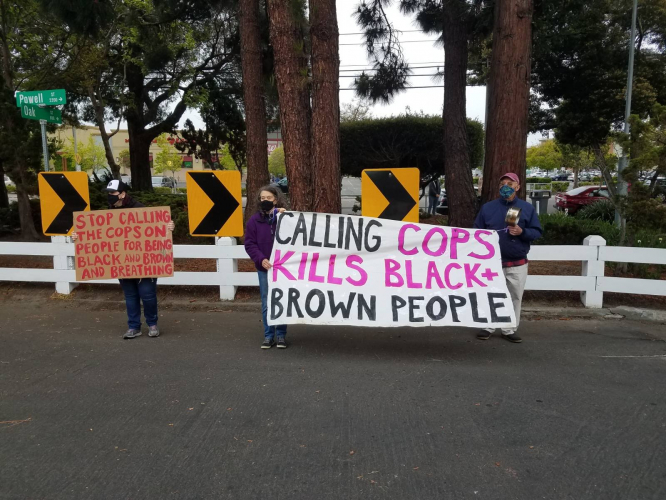 
Mario Gonzalez should still be alive!

We are an autonomous group of white Bay Area residents outraged by the 911 caller's disregard for safety by prioritizing the emotions of a white woman over the life of a young father of color.

There is a long history in this nation of fair-skinned women saying they were afraid of men of color, and this resulting in the death of a beloved community member. Your irrational fear — which is truly about power, control, and domination — stole Mario's life from his son, his brothers, his mother.

We are outraged and want to send a message to Klanameda Kop Kallers: You have blood on your hands! You are just as guilty as the police. You murdered Mario Gonzalez.

We support the work of the organizations assisting Mario's family to get justice, Anti Police-Terror Project and CURYJ. However, we feel white people need to start holding other white people accountable for this behavior, so we are bringing this to your doorstep to let you know — the racist violence of that 911 call will not go unaddressed.


For more information on the tragic murder of Mario Gonzales and how you can support the family:

https://www.facebook.com/CURYJ
Add Your Comments
Support Independent Media
We are 100% volunteer and depend on your participation to sustain our efforts!