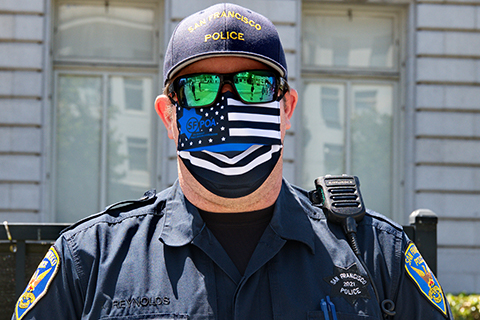 At a May Day housing protest in San Francisco, a line of police wore face masks that depict the "thin blue line" flag. The same day, at least one policeman responding to a reopen rally and counter-demonstration at City Hall wore the same type of mask. The flag became a popular symbol for racists who opposed the Black Lives Matter movement that emerged in response to police shootings. The flag symbolizes the pro-police slogan "Blue Lives Matter."

San Francisco’s police union provided the face masks with its initials POA (Police Officers Association) printed on them. An activist in the Justice for Mario Woods movement said the masks are a reminder of the severe disparities between black and white San Franciscans and highlight institutionalized racism within the health industry. The SFPD murdered Mario Woods with more than twenty gunshots in 2015.

SFPD policy forbids officers from altering their uniforms in a manner that reflects political messages. Police Chief Bill Scott said he is now seeking “neutral” face coverings. Until Scott obtains them, people on the streets of San Francisco will continue to see SFPD officers wearing the Blue Lives Matter masks.