by Insult to Black Lives Matter, Insult to All
Photos of the scene at a May 1 housing protest in San Francisco show a row of police wearing face masks that depict the "thin blue line" flag. At least one policeman at a reopen rally the same day wore the same mask. Police regulation states that officers cannot alter their uniform. City Police Chief Bill Scott says he is seeking “neutral” face coverings for the city’s rank and file. 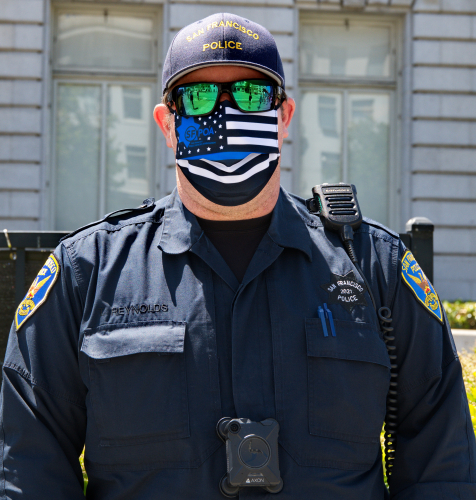 original image (2400x2521)
[Photo by Leon Kunstenaar, Pro Bono Photo. Please credit the photographer. Photo here is of cop in mask at reopen rally and counter-protest at San Francisco City Hall on May 1.]


San Francisco’s police union gave officers face masks depicting a flag that symbolizes the Blue Lives Matter counter-movement. The flag became a popular symbol for racists who oppose the Black Lives Matter movement that rose up in 2014 in response to police shootings.

Officers wore the offensive masks when responding to a housing protest on May 1.

According to the San Francisco Examiner, an activist in the Justice for Mario Woods movement said the masks are a reminder of the severe disparities between black and white San Franciscans and highlight institutionalized racism within the health industry. Mario Woods was murdered by gunshot in 2015 by police. Two rounds pierced his skull, one grazed a cheek and others struck his thighs, back, chest, abdomen and hands, according to the autopsy report. Authorities reportedly found 27 bullet casings,

According to the Examiner article, John Crew, a criminal justice advocate and retired ACLU attorney, under San Francisco Police Department policy on-duty political activity is not allowed.
“The definition of a uniform is that it's uniform,” Crew said. “There is no option to add your own statements, affiliations, whatever.”

The masks also had on them the symbol of the police union, the SFPOA logo. According to the SF Chronicle, San Francisco Police Chief Bill Scott is now seeking “neutral” face coverings.


END_OF_DOCUMENT_TOKEN_TO_BE_REPLACED
Add Your Comments
Support Independent Media
We are 100% volunteer and depend on your participation to sustain our efforts!