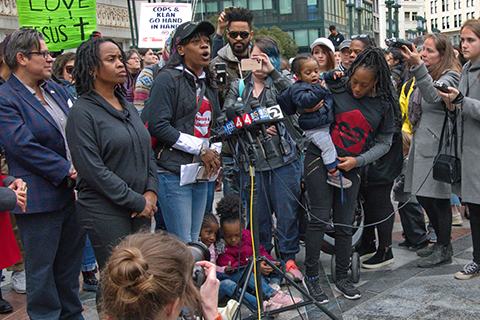 The Anti Police-Terror Project again joined with multiple organizations to lift up the radical legacy of Martin Luther King all weekend long, culminating in the 6th Annual Rally and March on Monday, January 20. For six years running, the APTP Reclaim MLK event has been the only MLK March in the city of Oakland. Hundreds of Oaklanders look to the weekend as one of the largest social justice events of the year, bringing together people across race, class and political ideology with a commitment to build a just and equitable Oakland of which Dr. King would be proud.

Emergency Guerilla Housing To Be Built for Unsheltered Oaklanders (10am)
Saturday, 1/18:

Emergency Guerilla Housing To Be Built for Unsheltered Oaklanders (10am) |

Free Entry at Museum of the African Diaspora (11am) |

MLK meets a mule able to plough 40 acres of zombie prevarication (9am)
Friday, 1/17:

Santa Cruz
What Would Martin Luther King Jr. Do?